It's Not Just Bread-Sliced Bagels; All ‘St. Louis-Style’ Food Is Disgusting 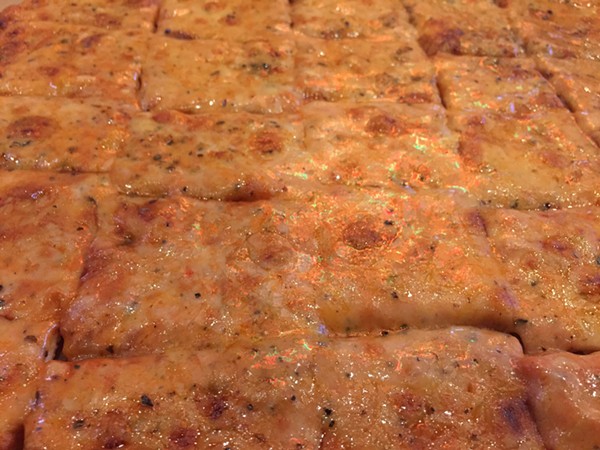 By now you’ve probably heard all about the great bagel debate that popped off on social media yesterday.

A tweet including a photo of vertically slice bagels set Twitter on fire, causing endless fights about the appropriate treatment of carbohydrates. Lines were drawn in the sand. Forehead veins throbbed. Divorce attorneys were called.

Today I introduced my coworkers to the St Louis secret of ordering bagels bread sliced. It was a hit! pic.twitter.com/XNGbljtpYz


This style of slicing at Panera (a company known here in the Lou by its original name, the St. Louis Bread Company or “Bread Co.” if you’re a down OG) was nicknamed “St. Louis style,” even though when we order it at Bread Co., we always just ask for our bagels “bread-sliced.”

nothing reminds me more of the summer than a st louis style hot dog pic.twitter.com/i43OCNCjrr


And this “St. Louis style” peanut butter and jelly sandwich:

Today I introduced my coworkers to the St Louis PBJ pic.twitter.com/yEkBusJx6G


But we have news for those of you outside St. Louis: If you think what we do to bagels is wrong, just wait until you learn how much we disrespect pizza.

If we have any talent here in the Lou, it’s that we can take any good food and ruin it. (Or fry it.)

There are plenty of real-ass food abominations in St. Louis, but what we do to pizza is criminal. We make it with super-thin cracker crust and we cover it with something called Provel. It’s a plasticky "processed cheese product" that ruins taste buds on contact, making people from St. Louis unable to tell the difference between real pizza and this trash after the age of two. It’s really more like nachos than pizza, but St. Louis just can’t get enough of the stuff.

We also have something here called “Gooey Butter Cake” — which is good if you’re actively trying to get diabetes. It’s like unbaked cake batter mixed with five pounds of butter and topped with powdered sugar. The finished product always seems so… raw.

We also deep-fry ravioli and call it “toasted ravioli.” Nope, no toasting involved. Just a vat of grease and a side of marinara sauce. The result is more like a mozzarella stick than anything resembling real Italian food, but whatever. Once you’ve accepted Provel into your life you might as well just fry everything.

We’ve also decided that ice cream doesn’t have quite enough calories and now we will only be satisfied by ice cream with egg in it. Frozen custard is the only acceptable frozen treat in town, and if you prefer ice cream joints like Baskin Robbins to our own Ted Drewes, we know that you’re from another city and are not to be trusted.

Speaking of eggs, we like to eat them in the form of a "slinger." That usually involves hitting up any greasy spoon in town and getting a big plate of egg-based slop. A slinger is a pile of eggs with enough toppings to induce a heart attack — gravy, chili, anything that looks like dog vomit will do. Add in some questionable meat, chopped raw onion chunks, hash browns and go ahead and drop a slice of cheese on top and maybe some syrup and butter, too. There are no rules with the slinger.

Our sandwiches are also a goddamn joke. There’s the St. Paul sandwich, a regional favorite. It’s an egg foo young patty and some pickles and mayonnaise stuffed inside two slices of white bread. And some of our old-timers even eat brain sandwiches. That’s cow brains, cut into thick slices, fried and stuffed between bread. The texture is said to be like that of a spongy McDonald’s hash brown. We’re practically zombies.

So when you see a picture of a bagel sliced up bread-style on the internet, just know that is us doing the best we can. And that we can do much, much worse than that. There are thousands of reasons to be proud to be from St. Louis, but the food is not one of them.

The author is a St. Louis native who never forces Provel on out-of-town guests. Visits to the City Museum, however, are mandatory. Email the author at jaime.lees@riverfronttimes.com.