The Silver Ballroom Is Getting Pizza, Korean Street Food and More 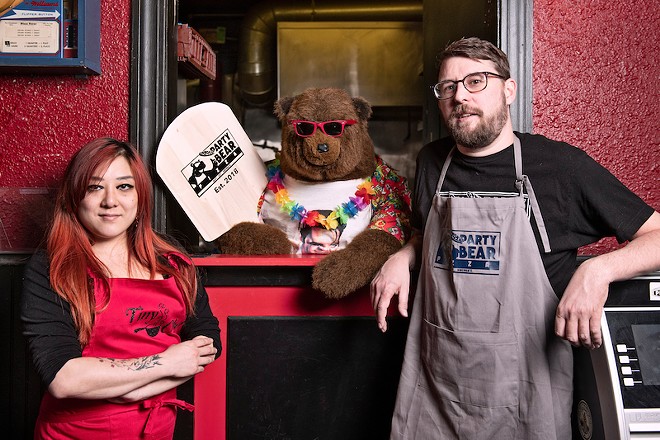 Chris Ward loves pizza. Melanie Meyer loves cooking. And they both love pinball. So what could be better than a venture that combines all three?

The couple announced last night that they'll be launching food service at beloved Bevo Mill pinball bar the Silver Ballroom (4701 Morganford Road, 314-832-9223). Their business, a food window embedded within the bar, will run under the name Party Bear Pizza and Tiny Chef and offer everything from frozen pizza to-go to Meyer's Korean-inflected bowls, tacos and other street food offerings.

Meyer (dubbed "the Tiny Chef" by former boss Ben Welch) has experience at a number of restaurants in town, including LuLu's Local Eatery and the Restaurant at the Cheshire. She'll take the lead in the kitchen. Ward, a KDHX DJ and former journalist, is keeping his day job in marketing, and will be chiefly responsibility for the pizza end of the operation.

As Ward explains it, he's long dreamt of launching a pizza concept. He began working at his parents' Illinois restaurant, Pizza Unlimited, at thirteen, and later did stints at Monte Bello Pizza in Lemay and Felix Pizza Pub in Dogtown. But it wasn't until he acquired a party bear that he got serious about building a pizza empire of his own.

The bear (that's the furry fellow in the photo above) was being sold on Craigslist. Ward's friend Kris stumbled onto the ad, and Ward was endlessly amused ("It said, 'Party Bear for sale,' just assuming that everyone needed a party bear," he says). Ward originally set up a GoFundMe to buy the bear as a joke, but when it raised more money than he'd even asked for, he ended up buying the bear and using the cash to throw a party. Mascot in place, Party Bear Pizza took off from there.

Even so, it took extensive testing to determine he had a viable concept for St. Louis, Ward admits, due to one uncomfortable truth. "I don't like Provel," he says. "I just don't like it. I believe Provel is murder." Would St. Louis diners go for a pizza without the processed cheese-like product? Turns out, the answer was yes.

"I believe in these now," he says. "I got enough outside feedback that I can say, 'OK, these are pretty damn good.'"

He never had any doubts about Meyer's abilities. "I know pizza; she knows all things," he says.

Born in South Korea before being adopted by a Missouri family, the accomplished chef loved the idea of serving bowls of bibimbap and other Korean offerings. A couple in life as well as business, Ward and Meyer saw a need for more good Asian food on the south side. "We really want to cater to the Bevo neighborhood and the Ballroom crowd," Ward says, adding that both are regulars there. "Those are our friends and family."

The couple will offer limited food service at the bar's ninth anniversary on March 30. They plan to launch the full menu with regular hours at some point in April. Keep an eye on their Facebook page for further details.