How Jessie Mueller Came Back to Rise Coffee House 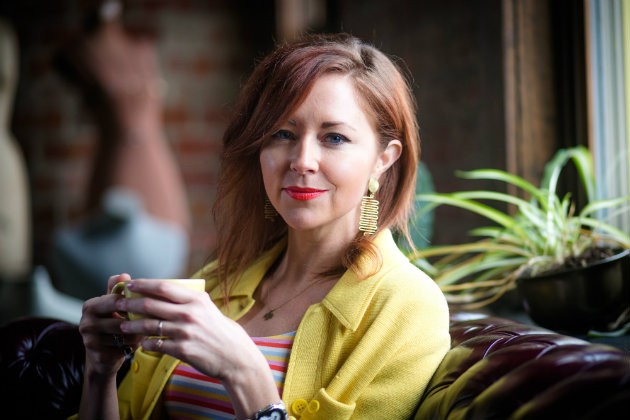 Opening a coffee shop was never part of Jessie Mueller's plan. A teacher and aspiring social worker, she was simply out working on a community service project in the Grove with a classmate at Saint Louis University when they realized they needed a little caffeine pick-me-up. To their dismay, there was no coffee to be found.

"We were out picking up trash, which the program called 'beautification efforts,' and we were tired and needed coffee," Mueller recalls. "We got to talking about how crazy it was there wasn't a coffee shop in the area yet. The next thing I knew, I was going down the rabbit hole of opening my own cafe, even though I had never known anything about coffee. My friend told me that there was this whole world of coffee out there that I needed to learn about if I wanted to do it, and I remember thinking, 'What do you mean?' It was such a naive thing, but I just got inspired and decided to take the risk."

Mueller did not realize it at the time, but her inspiration to open Rise Coffee House (4176 Manchester Avenue; 314-405-8171) actually went back much further than that fateful, caffeine-deprived day. Mueller may not have known much about coffee, but, in her mind, that was only part of what she wanted her cafe to be. Her plan was for a community gathering place, where people could be themselves and feel that they belonged. That vision dovetailed with her lifelong inclination for community building and empowering others, even if she did not know the first thing about single-origin bean sourcing.

Mueller traces her passion for helping others back to her childhood. As the daughter of a single mom, Mueller watched as her mother struggled to make ends meet, and she felt the sting and shame of poverty. The experience cultivated within her a deep empathy for the suffering of others.

Drawn to the education field, she combined her love of reading and writing with her passion for empowering others as a language arts teacher. However, as she taught in schools where many students were from marginalized communities, she began to realize that her true calling was to try to effect social change outside of the classroom.

Working for Barack Obama's 2008 presidential campaign made her realize that she needed to refocus her talents. She enrolled in Saint Louis University with the goal of becoming a social worker — and then came Rise. On the outside, it seemed like an abrupt departure from her planned path, but Mueller saw the cafe as an extension of her desire to help others.

"As I developed the brand and concept, that's where my personal love for issues surrounding equity emerged," Mueller says. "I wanted it to be a place where we allowed others in the community to rise."

Mueller was clear in what she wanted Rise to be, but she admits to getting bogged down at first by the details of running a business, especially the coffee side. She had a very quick learning curve from idea to implementation. She got help from local roasters, such as Sump, Blueprint and Goshen, and took a trip to Portland to immerse herself in coffee culture, but she still felt like she did not know what she was doing — and that initially caused her to stray from her original goals.


"Without having the experience of running a cafe or working in coffee, I felt like a fish out of water," Mueller explains. "It was a very vulnerable feeling. I felt a lot of pressure to create this high-quality experience for people, but it did cloud my vision, which was to create and effect change in St. Louis by holding space for people."

Fortunately for Mueller, she met Aaron Johnson, who was exactly the right person to help her with the business and coffee side of Rise. Johnson had been a regular customer at the cafe, and, because of his extensive coffee knowledge, he became someone Mueller would regularly seek out with questions related to her business. After she begged him to come and help her, Johnson agreed to work a Saturday shift at Rise. There was no turning back.

"It was the best day I had ever worked there," Mueller recalls. "He was handling the groundwork, and I was able to fly. I didn't know at the time that I wanted to sell it to him, but I knew I needed him to be in the cafe."

When Mueller later decided to step away from the business to adopt her son,  there was no one else she wanted to turn to. Johnson agreed to her request, running Rise from 2015 until earlier this year and turning it from a simple coffee shop into a bona fide restaurant.

The expansion of offerings went far beyond anything Mueller could have imagined, and she was thrilled. However, as she began to feel a restless pull to get back into the workforce, she felt called back to the Grove, where she bought a building just down the road from Rise. At first, she was not sure exactly what she wanted to do with it, but that problem ended up solving itself in a way she never could have imagined.

As it turned out, Johnson, too, was looking for a change. He wanted to open his own roastery, Botanical Roasters, and, once he got to talking with Mueller, realized that the perfect solution would be a sort of trade. He would take over Mueller's building for his roastery, and she would buy back Rise, returning to her roots and original vision.

This March, they made the deal official, with Mueller taking back ownership of the coffee house she founded. With the ship running smoothly thanks to Johnson's capable leadership, Mueller is now able to focus on her original vision for Rise. She plans to keep the food-and-beverage side of the operation as Johnson left it, but wants to amp up the community-building side by serving as a space for politically oriented events such as fundraisers and policy talks. The way she sees it, she is back exactly where she needs to be, doing what she wanted to all along, even if it took a while to realize it.

Mueller took a break from Rise to share her thoughts on the St. Louis food-and-beverage scene, her hope for more inclusivity in the local coffee community and the latest reason her cafe staff is making her smile.

What is one thing people don’t know about you that you wish they did?
During my twenties I spent five years teaching middle school language arts, and many of my students were a part of the Voluntary Interdistrict Choice Corporation (VICC) program or from Bosnian immigrant families. The relationships I built with those students, in particular, shaped much of my thinking around issues of equity and injustice in St. Louis.

What daily ritual is non-negotiable for you?
Music with my morning cup of coffee. Also a quick step outside to take a deep breath, even if it’s cold out or raining, just to feel the elements.

If you could have any superpower, what would it be?
My superpower would be to understand all languages so I could travel the world without any communication barriers. This would be especially handy when ordering in restaurants!

What is the most positive thing in food, wine or cocktails that you’ve noticed in St. Louis over the past year?
The recurring story of emerging chefs leaving our region to gain more experience in larger markets, but feeling pulled to return to the city they love and make their mark on St. Louis, is something incredibly positive that we should celebrate.

What is something missing in the local food, wine or cocktail scene that you’d like to see?
I’d like to see more people of color being trained and lifted up in the coffee community — and even placed on a national stage to compete in barista and brewing competitions. We have a thriving coffee culture in St. Louis, and we have the power to create some great talent. Representation matters.

Who is your St. Louis food crush?
Like much of Saint Louis, I’m pretty hype on Loryn and Edo Nalic of Balkan Treat Box. What an incredible story!

Who’s the one person to watch right now in the St. Louis food scene?
Gibron Jones of Hosco Foods and Bohlen Family Farms are on the cusp of something really exciting with regards to education and empowerment on the agriculture side of the food business in STL.

Which ingredient is most representative of your personality?
Rise baristas recommend chai 'cause I’m “spicy and sweet and easy to like.” This made me smile.

If you weren’t working in the restaurant business, what would you be doing?
Something in social entrepreneurship. I love people and championing a cause to effect change. I especially enjoy helping folks realize their full potential and helping them see what they have to offer to their community.

Name an ingredient never allowed in your restaurant.
“Pumpkin Spice.”

What is your after-work hangout?
Skateboards and bikes outside in the street with my husband and two sweet boys, plus all the super rad neighbors.

What would be your last meal on earth?
Fish and chips at Dressel's Pub with a Civil Life Brown.