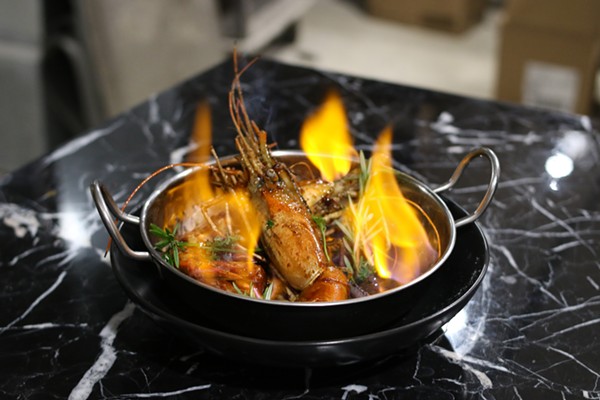 Hodgest bought the building back in 2015 and only intended to use it as office space for home health care and real estate companies, which are still located upstairs. He later realized that it would make a perfect seafood restaurant, and hired chef Ceaira Jackson, formerly of Fleur de Lilies and SOHO, to make his dream a reality.

Hodgest and his fiancee have traveled near and far, visiting many different seafood restaurants in many different cities. It made Hodgest realize the gap in the seafood scene in St. Louis, although he notes that 801 Fish and Yellowbelly have both since narrowed the gap. (Bait has been in the works for about three years, he says.)

He says restaurants in Los Angeles, Las Vegas London influenced Bait — inspirations that have resulted in a stunning space. "It has been rewarding to see people genuinely enjoy Bait and to watch my concept come to life," he says.

Indeed, the decor is modern chic, something you might pin to your Pinterest board. The black marble tables, gold accents, abstract art, smoked mirrors, candles, and low-lit dreamy chandeliers gave off major romantic vibes, with an illuminated wine wall that pulls the whole place together. The restaurant seats 60 in multiple rooms.

And it's not just the design that's eye-catching: Bait offers tableside drink service with a bar cart. Watch your signature cocktail be made without leaving your seat, including some stunning smoked cocktails that the bartender will make right in front of you.

Dishes range from $12 to $75. Whether you're in the mood for an oyster trio or the "Tomahawk Steak," there is something for everyone's taste. The most popular dish so far is the Caribbean red snapper, which features a whole fried snapper, Caribbean rice, pickled napa cabbage slaw, aioli, fresh herb sauce and hot pepper sauce for $32.

Or enjoy "Flaming Wicked Prawns," with jumbo head-on prawns, dark beer, Sherry, and fresh herbs for $17. This dish is brought to your table and lit on fire before you devour it.

Savory options such as alligator tacos, lobster fries duck are also available, along with a list of seafood boils and much more.

Hodgest has plans for much more, including special discounts on certain days, but says he's still getting his feet wet. "I don't want to do too much too fast," he says. "For now, I want to focus on being a staple of the community, someplace people can be excited to eat and feel comfortable."

Hodgest says Bait is everything he'd hoped it would be. Business is booming and plans for a patio and brunch are in the works for spring and summer. In three months Hodgest is also opening an event space that seats 250 people in the back of the building.

Bait is open Wednesday to Saturday from 4 to 11 p.m. Scroll down for more photos.