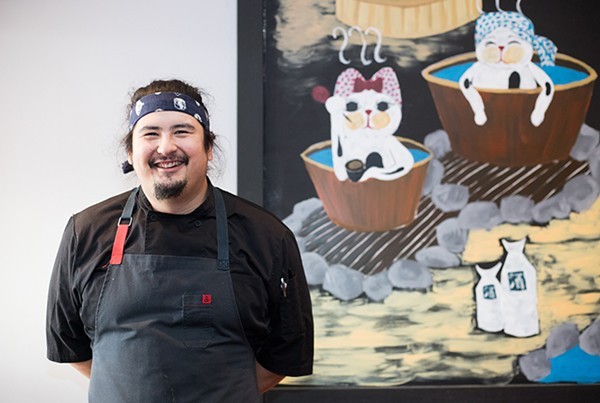 Nick Bognar — officially crowned a rising star chef earlier this week by no less than the James Beard Foundation — will open a new sushi spot in Botanical Heights.

Bognar's concept, iNDO, will take the former home of Good Fortune, at 1641 Tower Grove Avenue. He hopes to be open by May.

According to his press release, "At iNDO, Chef Bognar aims to further sharpen his idiosyncratic style, develop an envious fish program, and continue the popular 'Omakase Dinner Series' on a nightly basis."

The restaurant will seat 40, the release says, with a chef's counter serving six to eight diners. Bognar plans to serve lunch and dinner.

Bognar set off fireworks when he returned to his native St. Louis in 2017 and got to work transforming the offerings at his family's longtime restaurant in Ballwin, Nippon Tei. Just last week, RFT critic Cheryl Baehr declared his offerings there the metro area's best sushi, hands down.

The James Beard Foundation went even further, naming Bognar a semi-finalist for its national awards for Rising Star Chef earlier this week.

Good Fortune, which served what it called "new American Chinese," closed last month. The building is owned by Poremba, and will also house his food specialty store, AO & Co. His wife also owns a children's boutique, Honeycomb, on site.