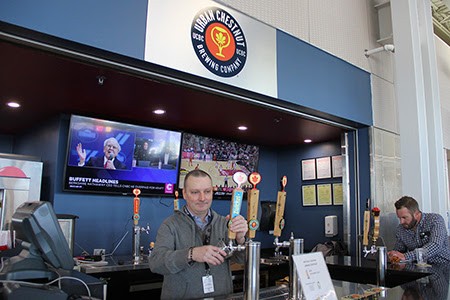 Flying on Southwest Airlines can be stressful. Not only do you have to hang out with your fellow poor people, but the lack of assigned seating on Southwest flights makes each boarding session a fight for the window, the aisle or space in the overhead bin.

But while it can be difficult to have a chill experience with discount airlines, one thing is guaranteed to make it better: Beer. And your friends at Urban Chestnut know just how to help you out if you're keeping it real in Terminal 2 at St. Louis Lambert International Airport.

The airport announced yesterday the opening of the Urban Chestnut Flight Bar, an outpost of the nine-year-old St. Louis craft brewery. It's located near gate E8, adjacent to the Great American Bagel, and initially promises eight beers on tap: Zwickel, Schnickelfritz, Forest Park Pilsner, Fantasyland, STLIPA, Dorfbier, Kinsale and Bushelhead Cider. Now both nervous flyers and fans of high-quality craft beer can sip some suds while mentally preparing for their flight out of St. Louis.

Not since DMX bought people shots at the airport Chili's location has it been so much fun to be at Lambert.

This bar is Urban Chestnut's fourth, and it should provide the company with plenty of exposure to new potential customers. Travelers will not only be able to stop into the bar area and check out what’s on tap, but also order their beers to go and enjoy them at their gate or elsewhere in the terminal while they try not to laugh at those chumps carrying drinks from Starbucks.

The Urban Chestnut Flight Bar is open from 4 a.m. to 9 p.m. daily, which might just be the incentive you need to book one of those cheap super-early flights out of town.