St. Louis Steak 'n Shakes Closed for 'Remodeling' Are Not Being Remodeled 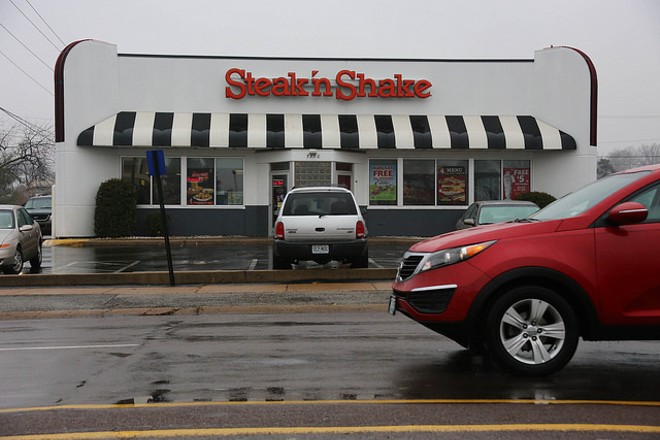 When news broke late last month that eight St. Louis area Steak 'n Shake locations were "temporarily closed" for remodeling, the entire situation seemed a bit odd. Steak n’ Shake regulars were left clueless about what kind of remodeling was being done and when their favorite location of the grilled burger chain might reopen.

But now they’re wondering if their favorite location will reopen at all. KTVI (Fox-2) reports that no remodeling is going on at the closed locations, and that reaching out to Steak ‘n Shake’s corporate offices for answers yielded nothing but silence. Reporter Vic Faust says that even the media company that announced the closures could not provide any further details because it did not “represent the restaurants anymore.”

We reached out to corporate media relations and also got nowhere. However, our call to a Steak ‘n Shake customer service operator yielded an intriguing clue.

When we asked about the status for one of the eight closed locations, our friendly customer service operator said she showed it as “not active.” Does that mean it's closed forever? Not necessarily, the rep said: It might reopen one day "under a different franchise," but that she had no further information on that.

Interestingly, a franchise ownership group in Virginia recently closed three locations there after feuding with the corporate office over pricing. As the Virginian-Pilot reports, the franchise owners there say that the company had "agreed to let the franchisee set its own prices for menu items in its franchise disclosure documents. But when it came to a request to increase prices, the company did not allow it, breaking those franchising and development agreements, according to the complaint."

Could something similar be afoot here? There's no sign of any lawsuit in local court dockets. But evidence seems to suggest that for whatever reason, our local franchise owner may have had enough of the steakburger business. Sigh.

Update 3:07pm: Multiple RFT readers have reported seeing billboards around town advertising Steak 'n Shake franchise opportunities. So if you're looking to get in on the steakburger game, it appears that now would be the time.

Update: A report from Fox2News quotes Steak ‘n Shake’s CFO of Franchising, Tom Murray, as saying “We are looking for franchise partners to come in and own and operate those locations" because the locations "were not extremely well run from cleanliness or customer service perspective."