Elaia Chef Aaron Martinez Was Led by Love to the Kitchen — and St. Louis 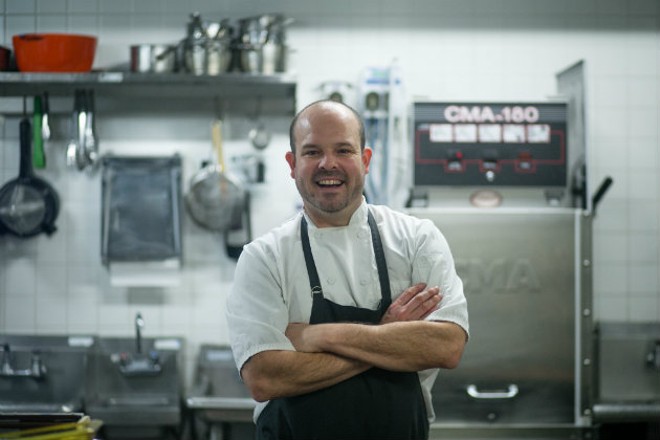 Chef Aaron Martinez, the new executive chef of Elaia (1634 Tower Grove Avenue, 314-932-1088), has worked in restaurants for as long as he can remember, beginning as a way to make money while he was in school. But his experience was in the front of the house until, during a stint in his mid-twenties at a fine-dining restaurant in San Diego, he suddenly saw the merits of kitchen skills.

Naturally, a girl was involved.

"I wanted to cook for her," Martinez laughs. "I started asking the chef all sorts of questions — 'Can I borrow this?' or 'how do you do that?' — and it just went from there. One day, I asked the chef if I should consider doing this for a career. I thought I knew what I wanted to do, but this changed my mind."

Reading Martinez's résumé, which boasts stints in impressive kitchens throughout the U.S. and Europe as well as his current position at Elaia, you'd assume he was destined to be a chef. Growing up in Orange County, California, however, Martinez planned on becoming a firefighter and was well on his way down that path. He was enrolled at both San Diego State University and an area technical college, where he took fire-technology classes.

But once he made the transition from serving to the kitchen, he was hooked on the restaurant business.

"I remember I was making an emulsified vinaigrette one day and thought it was so cool how water and oil could do this," Martinez recalls. "I realized how much I liked cooking and my mind just changed. Looking back, it's what I should've been doing all along, but you don't realize that until someone puts it right in front of you."

Martinez moved to Arizona for culinary school and got a job working for celebrated chef William Bradley at Vu. He loved the work.

"Working with him opened my eyes," Martinez explains. "It was very hard, to say the least, but he taught me how to cook and to run a kitchen. I could hold my own because of his training."

Martinez admits that the difficulties of working in such a high-stress environment got to him, and he left Vu to return to San Diego. However, when Bradley came to San Diego to open a new restaurant called Addison, Martinez realized that he wanted back in. More confident in his abilities and more mature, Martinez put his head down and soaked up all he could from Bradley.

Martinez worked at Addison for three-and-a-half years, staging in restaurants throughout California and in Spain before moving to Belgium to work at a the Michelin-starred In de Wulf. Within two months, he was promoted to sous chef and was being eyed by the executive chef to help him open other concepts. Martinez was thrilled with the idea of creating a life for himself in Belgium, but his plans were thwarted when his visa application was denied. Heartbroken, he returned to California.

Martinez's sadness was short-lived. He got married, moved to San Francisco and then Chicago, and started a family — a major life change that made him recalibrate his priorities. After briefly moving back to California with his wife and infant daughter, Martinez realized how important it was for them to be closer to his wife's family. The trio packed up, and moved to her hometown of St. Louis, not knowing exactly where he would land.

Martinez quickly found his fit at Elaia, taking over the reins of Ben Poremba's flagship fine-dining concept from executive chef Ben Grupe. There, he has been instrumental in changing the restaurant's format from a long-form-only tasting menu into a choice of options that makes the experience more accessible to a variety of diners.

Martinez could not be happier with the role and where his life has taken him.

"Being here and seeing my wife have the support she needs and my daughter happy and running around with her cousins has been great," Martinez says. "My wife's dad pops over every Monday to have a beer and just chit chat. We've never gotten a chance to do that before. It's what life is supposed to be."

Martinez took a break from the kitchen to share his thoughts on the St. Louis food and beverage scene, the local chef who convinced him to move to town, and why you shouldn't tell his mom what his last meal on earth would be.

What is one thing people don’t know about you that you wish they did?
I got started cooking when I was 26. I was trying to impress a girl.

What daily ritual is non-negotiable for you?
Coffee and kissing my wife and daughter before I leave the house.

If you could have any superpower, what would it be?
I would love to be able to read people's minds.

What is the most positive thing in food, wine or cocktails that you’ve noticed in St. Louis over the past year?
I have only lived here six months, but I see a lot of new restaurants with great chefs and bar programs popping up everywhere.

What is something missing in the local food, wine or cocktail scene that you’d like to see?
Late-night food options.

Who is your St. Louis food crush?
I would say chef Michael Gallina of Vicia. I spoke with him before moving here, and he solidified our decision to move here.

Who’s the one person to watch right now in the St. Louis dining scene?
Loryn and Edo Nalic of Balkan Treat Box. They are the nicest and most humble people I have met in a while. Their food is so good. I can’t wait for them to open!

Which ingredient is most representative of your personality?
Garum. It is very intense, but if you use it right it is subtle and pushes savory flavor profiles forward.

If you weren’t working in the restaurant business, what would you be doing?
A firefighter.

Name an ingredient never allowed in your restaurant.
I have a few: truffle oil, peeled shallots, and peeled garlic.

What is your after-work hangout?
Home, hoping my little girl is still awake.

What’s your food or beverage guilty pleasure?
A cheeseburger at the Loyalist in Chicago, and an Old Style.

What would be your last meal on earth?
I feel I should say my mom’s rice and tacos, but … I would have to say Epicure at the Hotel Bristol in Paris. Chef Éric Fréchon is my idol.