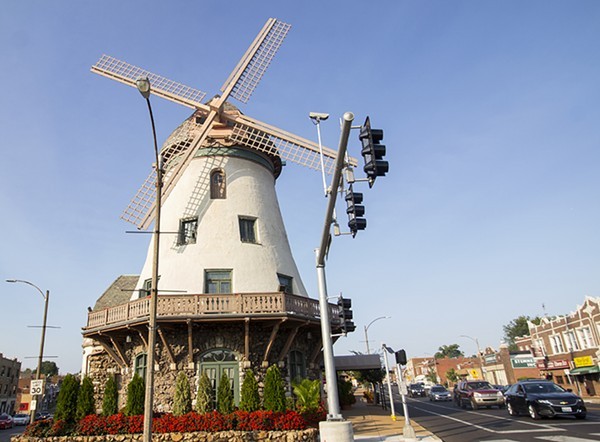 Das Bevo (4749 Gravois Avenue, 314-832-2251) served its last meal last Sunday — but you shouldn't write its obituary as an eatery just yet. The landmark windmill-turned-restaurant has a novel plan for its future.

Marketing Coordinator Bridgette Sesti Fyvie says the Bevo Mill space intends to stop doing what it didn't do well (running a restaurant) and instead focus on what it does (bringing in people for both private events and public ones). That will mean hosting other restaurants and chefs to handle food service for unique events every Thursday, Friday and Saturday, as well as bringing in food trucks to serve its outdoor biergarten in the summer.

"This is not a neighborhood that can support a lunch crowd during the week, or even on weekdays," she says. "But weekends have been very good." Bringing in outsiders to run the food service will keep the place from having to stay open when there isn't enough business to support it, she says. And that will also open up the possibilities for increased private events.

This Saturday is the only night this week Das Bevo will be open to the public, with Alex Cupp of the Stellar Hog providing food options while Kim Massie performs. But after that, Fyvie assures fans that the place will be open Thursday, Friday and Saturday throughout even these winter months.

"We want to make sure we always have something interesting happening," she says. "I'll be booking music so those hours are dependable." Recently, she notes, Das Bevo has been booking blues performers who lost their longtime home when Beale on Broadway closed last month. That will only increase, she says, along with popular draws like Harry Potter trivia and Beer Choir STL.

Originally built by beer baron August Busch Sr. to serve as a pit stop between his Soulard brewery and Grant's Farm, the iconic windmill on Gravois recently got a complete overhaul by Pat and Carol Schuchard, who also own (and restored) the Boo Cat Club and Majorette. It reopened as a restaurant after years of neglect in May 2017.

But Fyvie says the kitchen had long had trouble finding the right people, and when the most recent head chef announced his departure, the Schuchards had to take a hard look at things.

"We started interviewing people, but we didn't like what we were seeing," she says. "There's such a small pool of really talented people to pull from. It's been really hard. We decided we should focus on the things that are working — and those are public and private events."

Fyvie says Das Bevo hopes to reach out to the other restaurateurs in the Bevo Mill area, which includes a growing Mexican food scene. "We really want to focus on all the great restaurants that have opened in Bevo," she says.