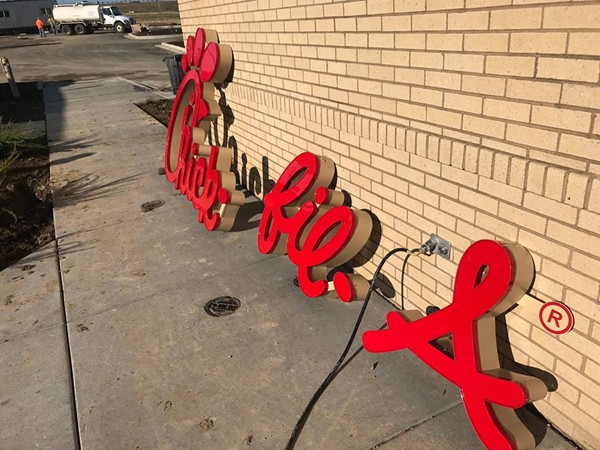 Update: The pre-opening campout has been canceled. See the latest at the bottom of the post.

Chick-fil-A will be having a dual grand opening in north county next Thursday, with new franchises opening in Bridgeton (12450 St. Charles Rock Road) and Florissant (3159 N. Highway 67). And for 200 lucky area residents, that means free Chick-fil-A for an entire year.

It's part of a fifteen-year-old Chick-fil-A tradition called "the First 100 Campout," in which the first 100 people in line at its restaurants' opening receive a digital card loaded with payment for 52 free Chick-fil-A meals, each including fries, a medium beverage and a chicken sandwich. But don't even think about showing up that morning and claiming your prize — registration starts at 6 a.m. the day before, on January 30. Brrr.

The company promises fun activities for participants, who will also get to enjoy Chick-fil-A meals throughout the countdown. First 100 events have given away more than $39 million through 2018, according to the company — that's a lot of free chicken.

The gift-card giveaway is open to guests in the surrounding zip codes only. For a full list and rules, check out the company's website. (Zip code lists are online for the two locations here.)

The Florissant location will be open from 6:30 a.m. to 10 p.m. daily and the Bridgeton location from 6 a.m. to 10 p.m. daily. Both restaurants are closed on Sundays. (And if you want to know more about that, as well as the reasons many LGBTQ diners are not greeting the franchise with open arms, we recommend this rundown on snopes.com.)

The first St. Louis Chick-fil-A opened in the Jamestown Mall in 1980. The opening of these two new locations will bring the number of Chick-fil-A locations within 25 miles of St. Louis to sixteen, the company says.

Update: In a press release Tuesday, Chick-fil-A said it was canceling the campout due to weather reports suggesting Wednesday could be dangerously cold.

In a statement, the company said this:


The safety of our Team Members and customers is our utmost priority. We have been monitoring the weather closely, and due to forecasts predicting below-zero wind chills, the First 100 Campout event at our new restaurants in Bridgeton and Florissant has been canceled. We will open as scheduled at 6 a.m. at our Bridgeton location and 6:30 a.m. at our Florissant location Thursday morning.