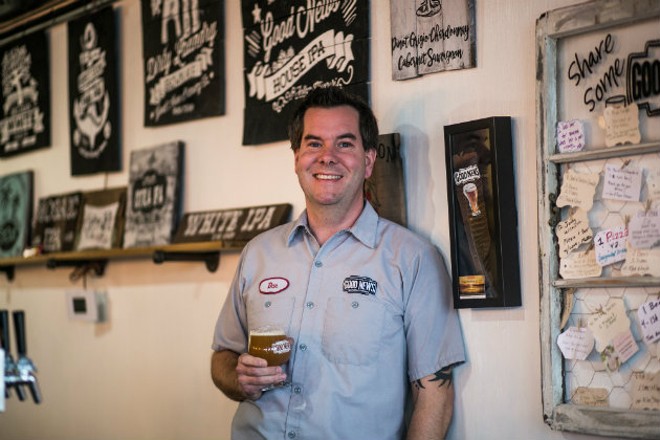 Dan Tripp spent his entire career dreaming of being a school administrator, earning his Ph.D in education and finally landing his dream job as an assistant principal. There was just one problem: He wasn't happy.

"I thought it was my dream job. My goal had always been to be a principal, but I didn't like it," Tripp says. "It wasn't my passion."

Now that he is living his passion — brewing beer for a living as co-founder of Good News Brewing (330 Sondoren Street, O'Fallon; 636-294-6593) — Tripp understands that his path had been right in front of him all along. A longtime lover of craft beer, Tripp began brewing on his own when he returned to Missouri from the East Coast after college. At the time, options outside of the major beer brands were limited. After he told his wife he'd like to learn how to brew, she bought him a Mr. Beer home brewing kit as a gift. It did not go so well.

"It was a total failure," Tripp laughs. "But a few years later, I heard there was a home-brewing store that would give you all the ingredients and teach you, so I decided to get back into it. I began researching like mad, reading books, watching videos and becoming obsessed with wanting to make good beer."

Tripp envisioned himself retiring one day and opening a microbrewery. However, that timeline accelerated when he met Matt Fair. Fair, who was also a home brewer, came to the weekly Bible study Tripp hosted in his home, and the pair began talking about beer. Tripp showed Fair his brewing equipment, and from that moment on, the two developed a friendship and brewing partnership.

"I always thought it would be neat to do church in a place that is not a traditional church — a way to connect with people," Tripp explains. "It's not about inviting people to church, but about community and connection. I asked myself, 'How do you use your talents and skills to build that?'"

Tripp and Fair expanded their home-brewing operation, building a one-barrel brewing system in Fair's basement. The pair would throw monthly brewing and pizza parties, inviting their friends to come over, hang out and see what was brewing. Eventually, they began selling their beer on tap at a local home-brewing store.

When that business sold, they decided to take matters into their own hands. Tripp, Fair and head brewer Josh Miller opened Good News Brewing in the summer of 2017. They chose O'Fallon not just because it is their neighborhood, but because they saw a void of local, mom-and-pop operations in an otherwise booming area.

They wanted to keep things simple, offering beer and wood-fired pizza, but as they grew in popularity, they realized they would have to grow in capacity. That expansion began this past fall, when the trio opened Alpha & Omega coffeeshop and roastery, also in O'Fallon. They are also in the process of opening a much larger space in Defiance, right on the Katy Trail, which will serve as the home base of their brewing operation, as well as a small restaurant, event space and community gathering hub.

Now living his passion, Tripp hasn't looked back on his former life. But he's still teaching high school students, leading a course on entrepreneurship at the St. Charles Center for Advanced Professional Studies. "My job is to teach high school kids about opening their own business, and I get to use my entrepreneur experience, which is really fun," Tripp says. "Besides, I'm pretty sure I am their only teacher who brews beer for a living. They get a kick out of that."

Tripp took a break from brewing to share his thoughts on the St. Louis area restaurant community, the mission behind his businesses, and why nothing is off limits in his brewery.

What is one thing people don’t know about you that you wish they did?
We started Good News Brewing and Alpha & Omega to share the Good News!

What daily ritual is non-negotiable for you?
Is drinking coffee and beer a ritual? If so, that is it.

If you could have any superpower, what would it be?
Remembering everyone I meet.

What is the most positive trend in food, beer, wine or cocktails that you’ve noticed in St. Louis over the past year?
More owner-operated establishments are opening.

What is one thing missing or that you’d like to see in the St. Louis food and beverage scene?
Our beer scene has really taken off, but I would love to see a better coffee scene. People think Starbucks and gas-station coffee is the standard. People used to also think Bud Light was the standard for beer. We have come a long way, but still have so far to go.

Who is your St. Louis food or drink crush?
Katie’s Pizza & Pasta. I stalk them on Facebook all the time.

Which ingredient is most representative of your personality?
Yeast. Always growing and trying to expand.

If someone asked you to describe the current state of St. Louis’ food and beverage climate, what would you say?
We are making great improvements, but there is still so much brand loyalty with big box companies.

Name an ingredient never allowed in your brewery.
I think we would allow anything to try it out.

What is your after-work hangout?
My wife and I like to go to El Tio Pepe Mexican Restaurant in O’Fallon for date night. We love the Cadillac margarita.

What would be your last meal on earth?
Beer and pizza, of course.