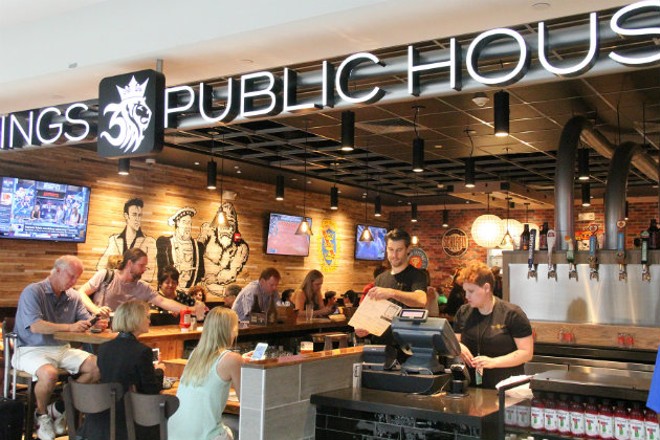 The local watering hole's airport location, which opened in June 2018 in Terminal 2, has been nominated by Airport Experience News as Best Airport Bar for USA Today's 2019 10Best Reader's Choice Travel Awards. The St. Louis bar is one of fifteen nominees to be voted on by USA Today's readership, with daily voting available at the paper's website through January 28.

The airport spot is one of four Three Kings locations that have cropped up in the St. Louis area since the flagship bar opened in the Delmar Loop in 2011. And lest you think "Best Airport Bar" is a case of damning with faint praise — after all, the goal with most of these is just to get drunk enough to calm your nerves for air travel, right? — we here at RFT, which for years was based in the Loop, can attest to the charms of Three Kings. Between its crispy chicken wings, juicy burgers and expansive beer selection, the space evolved over the years into a cafeteria of sorts for RFT staffers.

And so it seems our secret is out. Voting ends on January 28, and the winner will be announced on February 27, after which it will appear in the print edition of USA Today.

Still, even if Three Kings fails to capture the top slot, its inclusion on a nationally ranked list is certainly worth celebrating.