Husband and wife restaurateurs Paul and Wendy Hamilton met on the sea while working for a cruise liner, a job that afforded them the opportunity to explore the beaches and waves of the British Virgin Islands. Now, they have transformed their appreciation for the Caribbean into Rhone Rum Bar (2107 Chouteau Ave, 314-241-7867), which opened December 7.

Drawing inspiration from famous beach dives such as the BVI's Soggy Dollar Bar, the newly opened spot's highlights include an indoor beach volleyball court that is currently under construction, a sand-filled patio and, of course, rum — over 100 types of it.

Sixteen specialty cocktails are comprised of both frozen and "boat drinks," all for $8. The Hamiltons hope the lower-than-average specialty cocktail prices will appeal to a young crowd, particularly Saint Louis University students. Classics such as the Painkiller, Sex on the Beach and Dark 'N' Stormy fall under the "boat drink" side. Frozen cocktails are mixed and blended at a customer's order. The frozen key lime pie drink is a sugary mix of Blue Chair key lime rum, Absolut Citron, whipped cream and ice cream. Flakes of graham cracker coat the cocktail's rim, adding texture and flavor.

For those not into mixed drinks, an extensive selection of sipping rums from around the globe are found behind the bar, divided by country.

"Island drinks are sweet, there's no getting around it," Paul says — so sweet, that there's only one dessert, Pina Colada cake, on the menu. Rhone's rum cocktails are, "almost the dessert, they're so rich," bar manager Amanda Kostelac adds.

For Rhone, the Hamiltons went for an approachable menu that blends Caribbean-inspired dishes with Midwestern approachability. Though dishes are island-inflected, the goal was not to be married to authenticity; in fact, some Caribbean dishes were deemed too adventurous for Midwestern tastebuds.

"A big dish down there is barbecue pigs' tail," Paul explains. "We made that and everyone who ate it was like, "Yeah, tastes great, but there's no way anyone's going to buy it."

Tasty island soups such as goat water and bull's foot stew didn't make the cut either. Instead, popular shareables such as ceviche with taro chips, jerk chicken wings and conch fritters are available. 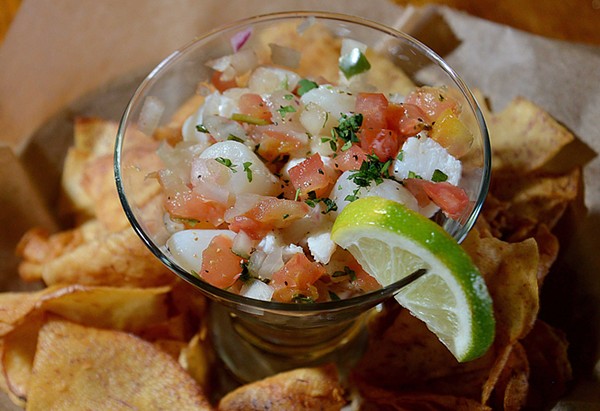 "We want the food to compliment the drinks, not the other way around," Paul says.

Much of the produce, particularly leafy greens at Rhone and other Hamilton Hospitality eateries, are homegrown in an aeroponic greenhouse adjacent to Rhone and also garden across the street. Last year alone, the Hamilton's grew 10,000 lbs. of produce.

It's not just the produce that has kept Paul's hands busy. Rhone's new bar is made of black walnut that was grown on Paul's South County property and handmade by himself. The decor also has a personal touch. Many of Rhone's decorations came from the Hamilton household.

"When we first got married, we had sort of a nautical theme because we met on a ship," Paul says. However, many of those items found their way into the basement over time. With Rhone's opening, they are "seeing a new day," Paul says laughingly.

That tropical atmosphere permeates every inch of Rhone. Dreamy photos of beaches and boats appear every ten feet or so; a BVI-based photographer friend of the Hamiltons made the large prints. Massive arched windows are lit with LED's and add brightness to the former Fitness Vault building. In addition to table seating, couches provide a comfortable space to lounge. These 100 spots added to the other seating put Rhone's total capacity at around 300. Lazing away the evening is not Rhone's only pastime, however. The Hamiltons hope to get volleyball tournaments, and potentially a league, up and running by mid-January. The sand-filled patio will open around March when the weather warms up. Cornhole and a ring toss game are fun options for patrons as well.

Rhone is open Wednesday through Saturday from 5 p.m. to 1 a.m. and on Sunday from noon to 8 p.m. Scroll down for more photos. 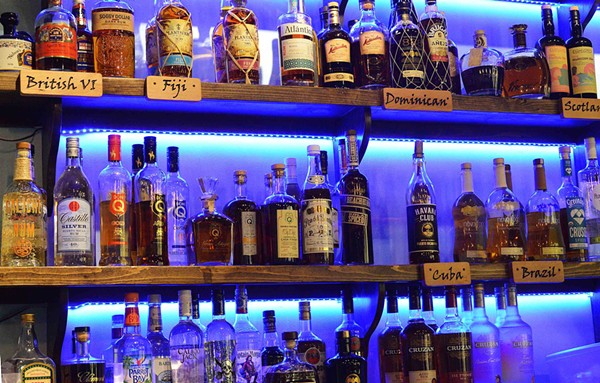