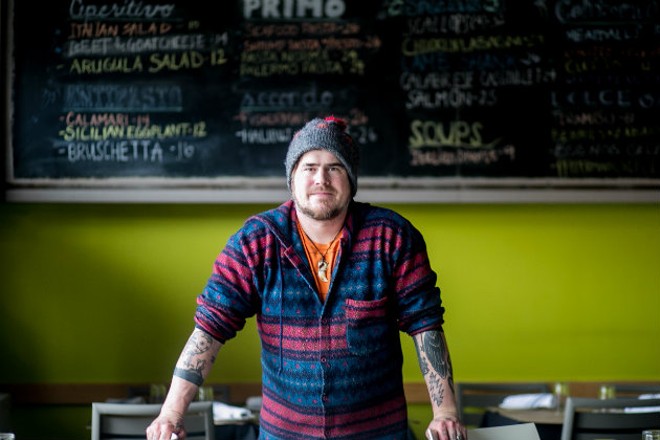 John Komotos has been around food his whole life, whether it was watching his dad and grandmother cook in the family kitchen or washing dishes to earn spending money at thirteen. But while those experiences set him on course for a career in the restaurant business, it was music that had his heart.

"My whole life, I thought I was going to be a rock star," Komotos says. "I was in a lot of bands growing up and consider myself a good musician and songwriter. It was my main goal, but what really damaged it was when Napster came along. Good talent really took a hit when all of that started happening, so it didn't really work out for me. Well, I guess it did."

Reflecting on how he got to be chef Pepe Kehm's right-hand man at Peno Soul Food (7600 Wydown Boulevard, Clayton; 314-899-9699), Komotos understands that the kitchen was always calling him, even while he pursued his passion for music. He worked in restaurants around St. Louis, including Cardwell's at the Plaza under acclaimed chef Bill Cardwell.

But Komotos admits he did not take the job seriously in his youth.

"If I would've focused solely on cooking, I'd probably be a restaurant owner by now, but I spent my twenties traveling and being a madman," Komotos says. "I was the class clown who would come in hungover. I could always hold down a job, but I never saw myself as chef material."

That began to change when Komotos found himself in Los Angeles, working in the city's vibrant restaurant scene. He began to view the kitchen as a career, and worked at Hot's Kitchen in Hermosa Beach for six years. But after getting burnt out, he moved from there to a series of bad jobs that nearly caused him to leave the business.

Fed up and overwhelmed by LA's high cost of living, Komotos returned to St. Louis this past March, working for Sugarfire Smokehouse before landing at Peno. Now serious about his craft — he credits having kids as his life's turning point — he is eager to show what he's learned over the years. Peno is the right spot to do that, he says, because he and Kehm both view food as a soulful experience. For Komotos, that's how he bridges the divide between his two passions.

"When I am cooking, I zoom in like I am playing music," Komotos explains. "It's like a spiritual experience; I understand it and can go different routes to get the essence out of every ingredient as best as I can."

Komotos took a break from the kitchen to share his thoughts on the St. Louis food scene, what's most impressed him since returning home from Los Angeles, and why you should pay attention to anyone who has come up through Bill Cardwell's kitchen.

What is one thing people don’t know about you that you wish they did?
I am in tune with the Earth; it’s important to me to feel connected that way and for it to come through in my cooking.

What daily ritual is non-negotiable for you?
Yerba mate in the morning.

If you could have any superpower, what would it be?
Time travel. Or the ability to dissect the good and evil in people.

What is the most positive thing in food, wine or cocktails that you’ve noticed in St. Louis over the past year?
I’ve just moved back after over a decade on the West Coast, and I’m loving the energy in the Grove and the restaurants on South Grand. Both have great new chefs and innovative menus.

What is something missing in the local food, wine or cocktail scene that you’d like to see?
I’d love to see more local chefs going back to their roots and beautifully execute some old foods from the past.

Who is your St. Louis food crush?
Ted Drewes.

Who’s the one person to watch right now in the St. Louis dining scene?
I’ve been out of the St. Louis scene for some years, but I’m pretty confident in saying anyone who worked for Bill Cardwell and is currently a local chef.

Which ingredient is most representative of your personality?
Toasted chile de arbol.

If you weren’t working in the restaurant business, what would you be doing?
Music, watercolors and gardening.

Name an ingredient never allowed in your restaurant.
Molasses.

What is your after-work hangout?
My house.

What would be your last meal on earth?
Vietnamese chicken and rice porridge with authentic fish sauce, fresh chile, limes and crushed peanuts.