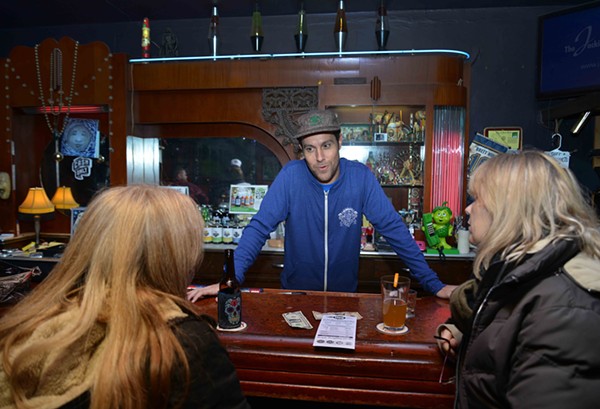 After surviving prohibition, near demolition from the creation of Highway 44 and changing owners, St. Louis' oldest bar is deciding not to sell alcohol—by choice.

Every Saturday, since the beginning of November, Pop's Blue Moon (5249 Pattison, 314-776-4200) has held NA Saturdays, featuring live music with non-alcoholic craft beers from Wellbeing Brewing, mocktails and other options.

Changes don't just stop with the menu, though. Liquor bottles, the PBR clock, a vintage Miller High Life sign and branded bar mats come down too.

"It means a lot to certain people not to have those triggers, to provide that comfort zone," says Joshua Grigaitis, co-owner and son of Terry "Pops" Grigaitis.

According to Grigaitis, who often goes by the name "Joshua Loyal" as a nod to his business, Loyal Family, the Saturday transformation makes Pop's the first and lone "dry bar" in St. Louis, if only for one day a week.

RELATED: 25 Things to Do If You’re Sober in St. Louis

"There's other people who, of course, will do things alcohol free, but it's not a bar atmosphere," Grigaitis says.  "This is as legitimate a dive bar as you can get."

Despite the obvious changes, Grigaitis says NA Saturdays are not all that different than Pop's usual vibe. If anything, patrons are more interested in what they're drinking, excited to try new, unexpected flavors and listen to musical performances ranging from bluegrass to hip hop.

Finding performers proved to be easier than Grigaitis anticipated. After initially putting out a call to find musicians who may be interested in playing a set on a NA Saturday, Grigaitis was overwhelmed by the response, hearing from around two dozen interested artists. Some are musicians who don't drink themselves or who were excited to play for crowds more interested in their art than the booze. 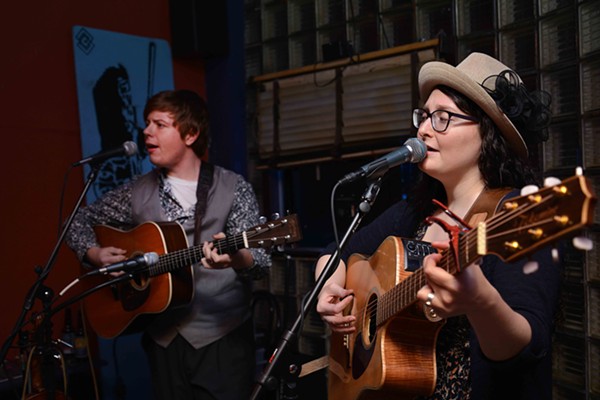 The decision to host NA Saturdays coincided with Grigaitis' own resolve to become a more mindful drinker. As a music promoter and co-owner of Pop's going on twenty years, the industry encouraged heavy drinking. However, the allure eventually wore off.

"Being in the bar business, it's just easy to have beers in your hand all the time. It's very hard to say no to everybody," Grigaitis says.

After six months of not drinking two summers ago, Grigaitus started brainstorming a way to shift his professional life away from alcohol. The answer—Wellbeing Brewing Company and its line of non-alcoholic craft beers—surprised him.

"I thought [the answer] would be another job or revenue stream like merchandising or sponsorships or food or something else within the same industry kind of," Grigaitis says. "I was looking for something that wasn't alcohol, but I didn't think it was going to be non-alcohol,"

Joining the Wellbeing team as a marketer in October of 2017, Grigaitis fell in love with the brewer's Heavenly Body N/A Golden Wheat. Subsequent releases, such as the hoppy-flavored Hellraiser and Coffee Cream Stout helped solidify Wellbeing's grip, not only him Grigaitis, but on the craft N/A industry as a whole.

Part of that success is owed to its technology. To date, Wellbeing is the only N/A brewer in the country with a dealcoholizer. The impressive machine, imported from Germany, heats the beer to 90 degrees Fahrenheit at the end of the brewing process. The temperature is hot enough to evaporate the alcohol but cool enough to not burn any flavors. Other N/A brewers boil their beers to remove alcohol, losing richness and taste.

Wellbeing has enjoyed unparalleled expansion in the past two years. Launching in the fall of 2017, its N/A craft beers are now in 26 states and Europe. Last January, Wellbeing produced around 500 cases of product. Eleven months later, its monthly case figures are closer to 4,000, Grigaitis says.

Wellbeing's rapid success in filling a void in the market helped convince Grigaitis and his father to try something different at Pop's. The first NA Saturday was originally planned as a release party for Wellbeing's Coffee Cream Stout, but the idea quickly ballooned, resulting in Pop's moving up the date more than a month. Grigaitis hasn't looked back.

"The buzz was so strong — or the not-buzz I should say," Grigaitis laughs.

Though St. Louis is often said to lag behind coastal cities in the food and beverage industries, it finds itself at the forefront in this case, riding the mindful drinking wave well before the rest of the country.

"The new, younger demographic is not heavy drinkers," explains Grigaitis. "They want to look good and feel good and be successful."