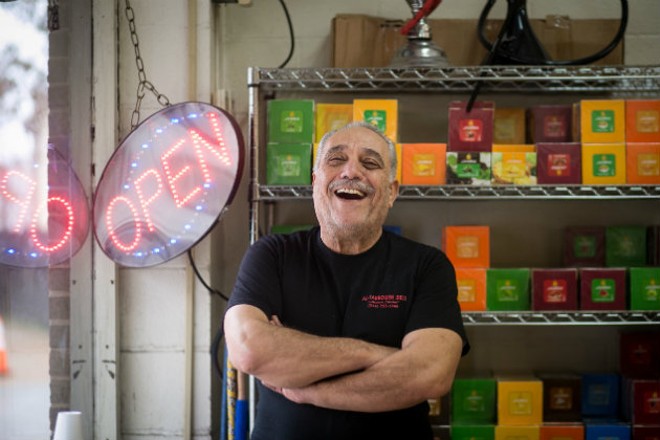 Unless you regularly attend mass at St. Raymond Maronite Cathedral, you wouldn't know that Sleiman "Sam" Bathani, the patriarch of the Loop's Al-Tarboush Deli (602 Westgate Avenue, University City; 314-725-1944), is also a musical talent.

However, if you lived in northern Lebanon in the 1970s, there is a decent chance you'd have heard of him. The lead singer of a touring music group, Bathani traveled around the country, and internationally, performing Lebanese traditional and pop music. In fact, that's what brought him to the United States in the first place. He just didn't realize at the time that he'd never leave.

"I was in a big singing group, and I was on a U.S. tour," Bathani recalls. "I was having fun, making money in Chicago, with concerts scheduled throughout the weekend. Then, two days after I got here, the war broke out."

When Bathani left for the U.S. in 1989, Lebanon was already fourteen years into a civil war. However, just days after he left for his tour, things took a turn in his region, putting the family he'd left behind in imminent danger.

When Bathani heard about the escalation, he frantically tried to reach his wife. It took days, and when he finally got through, he learned that she and their children had fled their home to shelter in her in-laws' underground bunker. Bathani could hear the bombs in the background when they spoke.

Bathani, his wife and her cousin hatched a plan for her to flee Lebanon for Cyprus by boat. All the while, Bathani continued to perform his music, transforming his Chicago tour date into regular gig at a club in the city while he waited for his family to arrive.

After reuniting in the U.S., the family settled in Chicago, and Bathani was hired full time at the club. After a short time, Bathani was approached by a prospective business partner about opening a club and event space of his own. He agreed, providing the musical entertainment for a massive venue while his wife created Lebanese masterpieces in the kitchen.

They enjoyed great success, but the long hours began to take their toll. Bathani knew that there had to be a better way for his family.

As Bathani explored his opportunities, he chatted with his nephew, who gave him the idea of opening a gas station: either with him in Boston, or with some family friends in St. Louis. After visiting St. Louis, Bathani decided to go in on a station in north county, packed up his family and moved 300 miles south to his new home.

Bathani's tenure in the gas business would be short-lived. In December 1996, not a year into the job, Bathani was held up at gunpoint. Dazed and bloodied from being hit in the head with a shotgun, Bathani was able to get the gun from his assailant, who then fled. That was the last thing he remembers before losing consciousness. When he awoke, he was in the hospital — and certain that he needed another way to provide for his family.

It was a friend in the real estate business who introduced him to the owner of Saleem's restaurant in the Loop, who was looking for a tenant to take on the tiny storefront just around the corner on Westgate. Initially, Bathani refused, thinking the space was too small. The owner sweetened the deal, offering to waive rent for the first six months. It was an offer he couldn't refuse.

Two decades later, the restaurant the Bathanis opened on site, Al-Tarboush Deli, has become a St. Louis institution, serving exquisite Lebanese cuisine from its humble digs. Bathani is still a fixture, but these days, his daughter Joeanne is the one most likely to prepare the food as the patriarch stands in the background, greeting the regulars who have come to love him and Al-Tarboush's magnificent sandwiches, salads and mezze over the years.

You're not likely to catch him singing there, however. These days, Bathani's voice is reserved for church, even though he notes he has a song of thanks in his heart for the path his life has taken.

"I've been so lucky," he says. "It's been nothing short of a miracle."

Bathani took a break from making Al-Tarboush's famous shawarma to share his thoughts on the St. Louis food scene, his daily rituals and why he is a lot like his favorite ingredient.

What is one thing people don’t know about you that you wish they did?
I love music. Ever since I was a young boy, music has been a part of my life. Also, I like to ski and used to ski in Lebanon.

What daily ritual is non-negotiable for you?
Every morning while I open up the restaurant, I listen to mass on YouTube. There is a channel that has the same mass every morning. Before bed, I always pray the rosary. There is a Christian Lebanese channel that does prayers all day, and at 10 p.m. they pray the whole rosary.

If you could have any superpower, what would it be?
To cure all the sick and all those who are in pain so everyone would be healthy all the time.

What is something missing in the local food, wine or cocktail scene that you’d like to see?
More Lebanese food — and people knowing about Lebanese food. There are only four places for it in St. Louis.

Who is your St. Louis food crush?
River City Casino, because I like their steaks. I go with my wife, and while she is gambling, I like to eat there. I also like Three Sixty.

Who’s the one person to watch right now in the St. Louis dining scene?
Chai "A.K." Ploentham of the Blue Ocean. I like what they do. He is always making his restaurant better, fixes what needs to be fixed and has good employees. He has a good system.

Which ingredient is most representative of your personality?
Garlic. It's strong and leaves an impression on people that stays for hours.

If you weren’t working in the restaurant business, what would you be doing?
Real estate. I have a couple of properties in the city that I have fixed up and currently rent out. I would do that full time.

Name an ingredient never allowed in your restaurant.
Cilantro!

What is your after-work hangout?
The gym. I love going to the YMCA to swim and work out. Then I go home and have wine with wife and watch our favorite TV shows.

What’s your food or beverage guilty pleasure?
I love sweets. I have a sweet tooth and have to have dessert after dinner.

What would be your last meal on Earth?
Lebanese fried fish. It's a different style of fried fish that is not breaded. The fish is just pan-fried in oil with lemon and Lebanese alcohol. I like to stuff it into a fried pita.