For Kemoll's Don Tadlock, a Job in the Kitchen Was His Best Birthday Gift 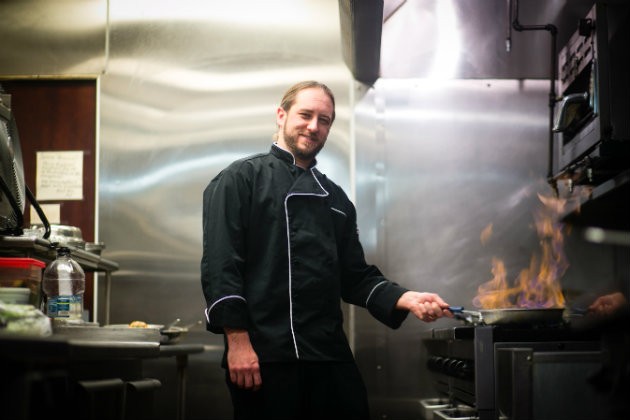 Don Tadlock will never forget his fifteenth birthday. His dad wasn't one to make a fuss out of holidays or going out to dinner, but that day, he told Tadlock there was somewhere he wanted to take him.

Tadlock was ecstatic when they pulled up to the local Italian restaurant, anticipating a fun birthday meal. However, when they walked through the front doors and up to the hostess desk, he realized his dad had other ideas.

"I thought he was going to ask for a table, and instead he asked if they were hiring," Tadlock recalls. "They told him they had an opening in the dish room, so he dropped me off later that day. I worked until 1 a.m. that night. On my birthday."

It may have been jarring at the time, but Tadlock looks back at the incident fondly, seeing it as one of the sparks that lit his culinary career, one that has spanned everything from cooking for Michael J. Fox and celebrities at the Kentucky Derby to his current job as executive chef at Kemoll's Fine Dining Restaurant (211 North Broadway; 314-421-0555).

Though he was just fifteen, he was already comfortable cooking — a skill he had learned from watching his mom around the kitchen. He was also inspired by his grandfather. A Granite City firefighter, Tadlock's grandfather was in charge of cooking for all the fire stations in the district, and would also regularly cook for the area's churches. Tadlock was often by his side, watching as his grandfather prepared meals for up to 500 people at a time.

At the Italian restaurant where Tadlock's father got him started, the owners had a rule that anyone who wanted to cook must spend an entire year washing dishes. Tadlock diligently completed that requirement and impressed the owners with his commitment to his job. Eventually, they moved him up to do catering work, then to cooking on the line and finally sous chef.

When he graduated from high school, Tadlock knew he wanted to go to culinary school. There was just one problem: He did not have the money to pay for it. His parents were firm in their rule that their children must leave the house and support themselves the day they turned eighteen, so Tadlock found himself with little means to pay for the program he'd found in Louisville, Kentucky.

He might never have gone to that program — or culinary school at all — were it not for one of the country's most celebrated chefs: the late Charlie Trotter. Tadlock had heard that Trotter gave out one scholarship a year to an aspiring culinary student. He penned a letter for the chef explaining everything from his life story to his dreams to his current economic situation. One week later, he got the check from Trotter and his wife.

Culinary school opened an entirely new world of food to Tadlock, and he soaked in every last bit and got mentored by chefs with impressive connections. He also worked for Famous Dave's, cooking at its flagship location and eventually helping expand the brand throughout the region.

After graduating from culinary school, Tadlock return to St. Louis to accept a position with the Chase Park Plaza hotel. There, he cooked on every single station at every outlet throughout the hotel — he got a chef-of-the-year award from AAA for being the youngest person to conquer such a feat — before settling in at the hotel's then-flagship, Eau Bistro.

When his chef at the Chase left to open his own restaurant, Tadlock followed. Pepperstone Steakhouse was an ambitious concept that required Tadlock to sleep at the restaurant three nights a week to rotate bones used for stocks every four hours. But though he loved what he was doing, he couldn't help but be curious when Mark Cusumano of Kemoll's called to talk to him about a job.

Cusumano was looking to take the storied downtown restaurant in a new direction, and he had heard glowing things about Tadlock. Tadlock decided to come on board, ushering in a new era for a local landmark that has been around for nearly a century.

As the restaurant prepares to enter another era — it will move to Westport this coming January and rebrand as Kemoll's Chop House — Tadlock can't help but reflect on both the restaurant's history and his place in it. He must maintain the balance of respecting the past while shepherding it into the future with his crew, whom he has come to see as family. It's a role he feels that he was made for.

"I get to take care of everybody," Tadlock explains. "I always wanted to be a missionary, but I got married and had kids, so I got away from that. Here, I feel like I get to do that."

Tadlock took a break from the kitchen to share his thoughts on the St. Louis food-and-beverage scene, the importance of making your bed every morning and the old-school dining style he'd like to see make a comeback.

What is one thing people don’t know about you that you wish they did?
I always wanted to be a missionary.

What daily ritual is non-negotiable for you?
I always make my bed as soon as I get up every morning, and I always go straight to the shower every morning before doing anything else. I don't even talk to anyone until I'm done with my shower.

If you could have any superpower, what would it be?
I never really wanted superpowers, but if I did, it would be to fly.

What is the most positive thing in food, wine or cocktails that you’ve noticed in St. Louis over the past year?
New restaurants are opening up every month. It's nice seeing all the new specialty small restaurants opening. There is more variety.

What is something missing in the local food, wine or cocktail scene that you’d like to see?
Breakfast buffets and more table-side cooking.

Who is your St. Louis food crush?
Kalbi Taco Shack and Sushi Ai.

Who is the one to watch in the St. Louis dining scene?
Gerard Craft and Marie-Anne Velasco.

Which ingredient is most representative of your personality?
Butter or bacon.

If you weren’t working in the restaurant business, what would you be doing?
Something water related, like a lifeguard, having my own boat-rental service or being a hunting guide.

Name an ingredient never allowed in your restaurant.
Coconut. I'm deathly allergic. Or star anise because I hate licorice.

What is your after-work hangout?
Home, so I can see my kids.

What would be your last meal on earth?
If it wasn't my mom's cooking, it would have to be slow-braised osso bucco with gnocchi.