November may have brought with it some chilly temperatures, but the St. Louis restaurant scene was as hot as ever. The big opening of the month — and one of the biggest of the year — was the highly-anticipated Grand Tavern by David Burke, located inside the newly-opened Angad Arts Hotel. Burke, a nationally renowned chef who has appeared on Top Chef Masters and was named to the "Who's Who of Food and Beverage in America" by the James Beard Foundation, brings with him the celebrity luster that has the potential to transform Grand Center into the dining destination the area has hungered for over the years.

Grand Tavern was not the only long-awaited opening of the month, however. Rockwell Beer finally opened at the end of the month, two years after the brewery was originally announced. If the beer isn't enough to get folks excited, Rockwell has teamed up with chef Gerard Craft to develop the brewery's food offerings. No doubt, it will prove worth the wait. 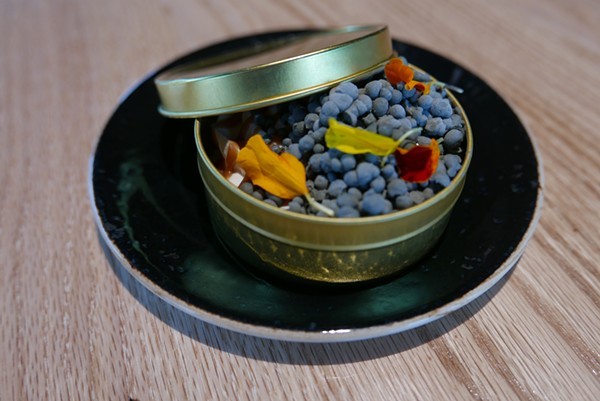 There was even good news on the closing front this month. The Cut, Ari Jo Ellis' sausage counter inside the Fortune Teller Bar may have shuttered, but only because Ellis is busy developing her forthcoming diner, Morning Glory. Similarly, Red Oak Biscuits closed its original location downtown, only to reopen to bigger and better digs on Cherokee Street.

Sadly, however, November saw the closure of not just a club but an institution. Upstairs Lounge, the South Grand nightclub that was the city's EDM hub and gathering place for music lovers of all genres, went dark after 26 years at the beginning of the month. Though the club limped along following the sudden passing of its owner, Tu Tien Tran, this past January, the Tran family decided the time had come to lease the building to new tenants. Details of the new occupants have yet to be released, but one thing is for sure: No one will forget the Upstairs Lounge or the legacy of its beloved owner.

What did we miss? Let us know in the comments.

See Also: The Cut Has Closed After One Year Inside Cherokee's Fortune Teller Bar

See Also: At the Chocolate Pig in Cortex, Desserts Are Only Part of the Menu