Schlafly's Rarest Beer of the Year, the Variant II, Will Be Released December 8

From the depths of the Ibex Cellar underneath the Schlafly Tap Room (2100 Locust Street; 314-241-2337) comes this year's rarest beer from the hometown brewer—the Variant II. The exclusive, special-release beer will be available next Saturday, beginning at 11 a.m.

A rich stout, with hints of chocolate and cherry, the Variant II was inspired by classic cocktails such as Manhattans and Old-Fashioneds, and follows industry trends towards sweeter flavors.

"As American brewers have grown and evolved as a community, the way we approach and think about stouts has also changed a lot," says head brewer Jared Williamson. "Stouts now are a lot more desserty. The terms 'pastry stouts,' 'milkshake stouts' get used a lot."

The Variant II is the latest beer in Schlafly's Ibex Rare series, the brewery's extremely limited, special-release program that allows its brewers to experiment and push their creativity to its limits. Like those before it, the Variant II spent time in the dark, brick corner of the cellar under the Schlafly Tap House known as the Ibex Cellar—a nod to Schlafly's original logo of a majestic ibex.

Ditching some of the heavier hops found in Schlafly's Imperial Stout, the Variant series allows other flavors to take center stage. The Imperial clocks in around 50 or 60 IBU's (an escalating scale for the hoppy bitterness of a beer) while the Variant II is around 30 IBU's

While Variant I and II move up the sweet spectrum, they also maintain an homage to the Imperial and other Schlafly brews.

"Really it was about designing a new stout base for us, while respecting what the company has developed over the years with the classic Imperial Stout," Williamson says.

The differences between the Variant II and its predecessor, while minute, prove refreshing in the evolution of the young series. Williamson and other brewers ditched port barrels, used for Variant I, opting for unproven brandy barrels instead. 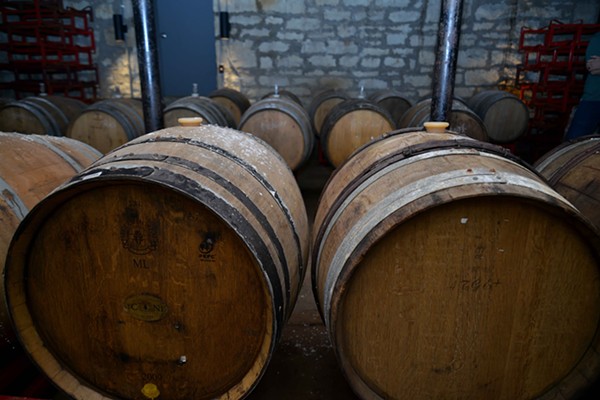 Two batches were aged in the barrels for six months, while a third batch was made near the end of that process. All three were then blended together until a perfect ratio was found to the brewers' satisfaction. The addition of sour cherries in the newest incarnation of the Variant required careful blending to avoid "going to cough-drop land," as Williamson says it.

Also lost from the former Variant to its contemporary were cocoa nibs. The fermented and dried bits of cocoa beans were left out this time, replaced by chocolate wheat and chocolate malt. Traces of the chocolate are still there, but allow for other notes such as the newly added sour cherries to take a more commanding presence.

"It's a decadent beer and is meant to be eaten with decadent food," Williamson says. "It's a special occasion beer," Wil Rogers, Schlafly's brand manager, adds.

The Variant II will only be sold in sleek pint bottles adorned with an embossed plaque, demarcating it as something to be savored with friends — not something to be drank by yourself when you have work the next morning, something to which Rogers can attest, and does not recommend.

Variant II will be available on December 8 at the Schlafly Tap Room and will release a limited number of bottles in the market. The cost for this rare beer is $30 a bottle, with a limit of three per customer. The first Variant drew lines around the building and previous Ibex Rare brews have drawn large crowds; Schlafly anticipates the Variant II will be at least as popular and anticipate the beer will not be around for long.

Correction: A previous version of this story had the incorrect release date.