Three years ago, Matt Fair and Dan Tripp were making beer in Tripp's basement. Today, they own and operate a brewery and a coffee house and are also opening a combination of the two in Defiance, Missouri.

Their meteoric entry into the industry may have taken a few by surprise, but for the pair it's part of a straightforward formula that they think could be replicated anywhere. "Beer, coffee and pizza. It's all about keeping it simple," Fair says.

The pair opened Good News Brewing (330 Sonderen Street, O'Fallon; 636- 294-6593) last summer, but the popularity of several of their coffee stouts left Tripp and Fair wondering if they could be doing more. Tripp and his wife Annie, along with Fair, started looking at locations in O'Fallon to open a coffee house as well. They found their answer just half a mile from Good News Brewing.

The group settled on a cozy, quaint, yellow house off North Main Street, opening Alpha & Omega Roasting (111 North Main Street, O'Fallon; 636-294-7050) just over a month ago. "You can't have a coffee house without the house," Tripp says. 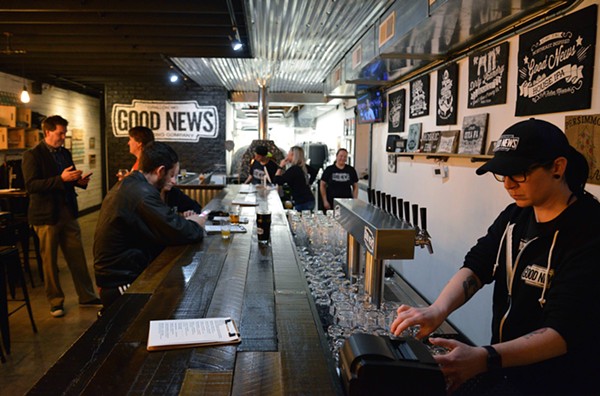 While separate entities, both places show the touches of their owners.

Good News' interior is a monochromatic, modern-looking gathering place. Walls lined with white-painted pallets contrast with a sizable black muraled logo, black tabletops and stools. "Not many places [in O'Fallon] have a vibe," Tripp says of their cool look. Wood-fired pizzas cooked just behind the bar are available with an ever-changing variety of craft beers on tap.

"We want to have our flagship beers, but also have something new every time you walk in the door," Fair says. "Our goal is to turn everybody into a craft beer drinker."

The pair have concocted several "gateway beers" to get more conservative drinkers trying new flavors and moving up the craft beer ladder. Ground floor is your domestic lagers, with hoppier, more full-bodied tastes filling out the top rungs.

The Good News bar is helmed by Mel James, formerly of BC's Kitchen. She's also a mixologist consultant to Alpha & Omega, helping to design the alcoholic coffee drinks served down the road, which include a classic Irish coffee and "Chocolate Peanut Butter Cup Martini."

While Good News looks contemporary and monochromatic, Alpha and Omega is retro and colorful. Vibrant vintage mugs, seating, light fixtures and more create a chic atmosphere for a caffeinated pick-me-up or a savory cocktail.

The dichotomy of drink options makes Alpha & Omega live up to its name, meaning "beginning and end." Annie Tripp thought of the name as a nod to patrons starting and finishing their days with the drinks.

Just as Good News hews to a menu of pizza, Alpha and Omega has one main food focus: gourmet grilled cheeses. They're available in an impressive array of options. The "Vampire Death Wish," for example, is named for its garlic Parmesan sauce and also features spinach, white American and provolone cheeses.

Coffee beans from all over the globe are roasted right in the basement. Tripp tries to keep Honduran coffee beans in stock at all times (he previously did mission work in the Central American country).

Tripp and Fair tend to move quickly. While Tripp was showing Fair the Defiance building for the first time, he told him to bring his checkbook. It came in handy. And while they plan to take a breather after opening their third location, the pair may just be ready to take over St. Louis — or at least St. Charles County.

"Our plan is to keep going until we buy InBev or they buy us," Fair jokes. 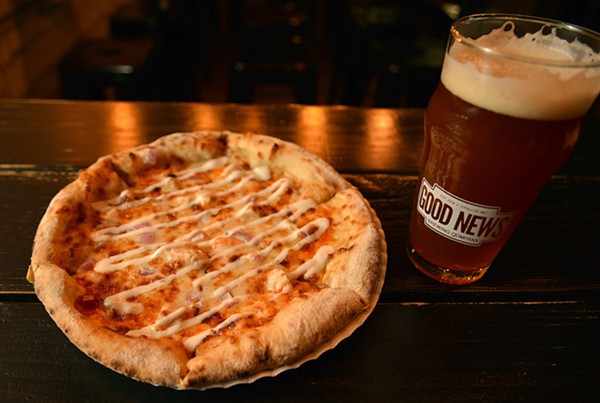