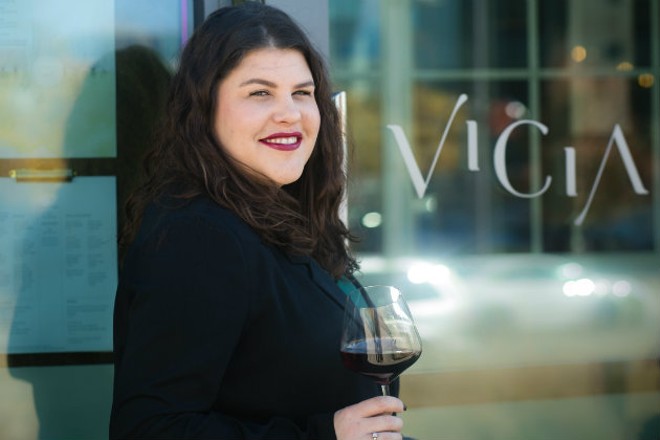 Watching beverage director Jen Epley work the dining room at Vicia (4260 Forest Park Avenue, 314-553-9239), it's hard to imagine her in any environment other than fine dining. But her restaurant roots are far more humble.

"My first job was at a bar in my hometown in Wisconsin," Epley recalls. "I was the only daytime bartender, and it was just a bunch of old dudes who ordered rusty nails and gin and tonics. I was also the cook, so I would throw corndogs and fries in the fryer. I was nineteen and had to tell when people were too intoxicated — there was no way I should've had that responsibility."

Epley may now be worlds away from corndogs and the deep-fryer, but she hasn't forgotten her beginnings, crediting them for instilling both humility and a hark-working ethos. From that small bar to a bowling alley to an all-you-can-eat seafood joint, Epley worked her way up at every employer, earning the trust of her superiors as she learned the business.

Though she had a knack for the service industry, Epley did not intend for it to be a career. She instead saw restaurant work as a way to figure out what she wanted to do with her life after dropping out of college. Her original plan was to become an interior designer, and she attended the University of Minnesota-Twin Cities for a year in pursuit of that goal. But though she was serious in her passion for the subject matter, she admits she was not so serious about attending classes.

"Living in a big city opened my eyes about how many different things there are in the world, like art, culture, food," Epley explains. "Let's say I focused more on enjoying the city than school."

Epley left college and returned to her small town in Wisconsin, not sure what she wanted to do with her life. The restaurant business was fine enough — and she did well in it — but she wanted something more.

That drive pushed her to move to St. Louis for a change of scenery. Her half-brother lived in Arnold, and Epley thought a new environment might give her some perspective. At first, she helped him and his family, doing chores, taking care of the kids and running errands. However, when she decided to get a job out of their home, the restaurant business was a natural choice.

Epley's first job in St. Louis was at an Italian restaurant within walking distance of her half-brother's house — a place that advertised itself as a "Taste of the Hill." She recalls initially having no idea that "the Hill" referred to the city's Italian neighborhood, but she would eventually find herself at the real thing after landing a job at Five Bistro (now J. Devoti Trattoria). It was a move that would change her life.

At Five Bistro, Epley was introduced to the intricacies of fine dining, everything from multi-course dinners to wine pairings. When she was up for a different challenge, she found herself working for Ben Poremba, first at Olio and eventually as a server at his elegant flagship, Elaia. There, her wine-and-service knowledge deepened, and she realized that the food-and-beverage business was her path.

After helping Poremba open his since-shuttered fried-chicken restaurant Old Standard, Epley landed as a server at the former Niche. What she learned under service directors Matt McGuire and Chris Selling would shape her approach when she went on to become the beverage director and manager at Michael and Tara Gallina's acclaimed Vicia.

"It's amazing how much they trust me and want to give me opportunities to grow," Epley says of the Gallinas. "It's been a great learning experience. There have been tears and stress for sure, but I feel like at Vicia, I am putting everything I learned at Five, Elaia and Niche together."

Epley took a break from the dining room to share her thoughts on the St. Louis food-and-beverage scene, the lowdown on what could be the next best guilty snack pleasure, and why you shouldn't be offended if she introduces herself to you two (or three) times.

What is one thing people don’t know about you that you wish they did?
I’m really bad at remembering names and faces. I can remember what you ordered, and the conversations we had, but I fail miserably when it comes to the basics. I’m sorry to anyone I have met and reintroduced myself to.

If you could have any superpower, what would it be?
I wish I could fly (with luggage in hand). I’d love to check out the world without having to quit my job and rack up debt.

What is the most positive trend in food, beer, wine or cocktails that you’ve noticed in St. Louis over the past year?
I love that chefs are putting down restaurant roots in St. Louis. The low cost of living means we get to reap the benefits of these talented individuals. I’m excited to see what the next year brings; fingers crossed Michelin comes to the city.

What is one thing missing or that you’d like to see in the local food and beverage scene?
I’d love to see a 2 a.m. (because there are no good decisions made past 2 a.m.) wine bar that serves snacks and small plates until close. Sometimes I want to have a funky glass of orange wine or a half bottle of Champagne all to myself, or a $25 glass of Nebbiolo decanted and served at the correct temperature. Let's bring in those weird wines, stock up on half bottles and make use of the Coravin for nicer bottles. Can someone do this please so I can be a regular?!?

Who is your St. Louis food or drink crush?
Chef Nate Hereford, hands down. He led the kitchen while I worked at Niche, and I have so much respect for him. I genuinely believe he is in the business to feed people and not for the potential fame. He was intimidating at first, but I made him a massive coffee drink at the start of every dinner service and I like to think he warmed up to me. I’m super excited to see what Nate does next.

Who’s the one person to watch right now in the St. Louis food and beverage scene?
Victor Gainor. I worked with his sister, Catie, at Olio and Elaia, and she reached out to me when we were looking to hire at Vicia. She’s bright, strong and she comes from a family that loves food and drink, so I figured her brother would be a good fit. Victor started as a host, learned to assist servers and was eager to move on up. A full-time bartender position opened up, and he asked me to consider him for the role. Phil Ingram is his big brother behind the bar, and I just love their dynamic (I worked with Phil at Old Standard and Niche, and he balances me out quite nicely). It’s been fun to watch Victor grow. He has a lot of creativity, a love for cooking, a great palate, a hospitable personality and a strong work ethic. The sky is the limit for the kid.

Which wine is most representative of your personality?
Sekt! It’s a sparkling riesling from Germany, and it loves to be paired with all types of food. I’d like to think of myself as a blend of bubbly, bright and earthy (and oftentimes without the price tag of Champagne).

If someone asked you to describe the current state of St. Louis’ food-and-beverage climate, what would you say?
I think St. Louis has a decent balance of tradition and trendiness. It's a city that is starting to become more aware of how food is made or grown. We are becoming more educated diners by asking questions about ingredients, labeling, cooking techniques and wine production, and that really excites me. Don’t get me wrong, there is always a time and a place to honor traditional, family-run establishments, but it’s also important to embrace change and to keep an open mind.

If you were not in the wine business, what would you be doing?
Since I was in elementary school, I loved rearranging furniture, decorating our new house every time we moved and watching design shows on television. I always thought I wanted to be a residential interior designer, but after working in several restaurants, I might be good at designing commercial spaces.

What is your after work hangout?
I’m actually quite introverted, so most nights I like to go straight home after work. If I’m starving and I want to splurge a little, I’ll head to Taste for a cocktail and some bites. If I’m feeling social, I’ll grab a case of Natty Light and head to the "bistro" (J. Devoti Trattoria), as it’s blocks from my house and I love hanging with the crew after hours.

What’s your edible or quaffable guilty pleasure?
This guy I went to high school with, "Scooter," invented the "Scooter Snack." Lightly toast a plain bagel, smear a lot of cream cheese on it, shingle Nacho Cheese Doritos on top and then make a sandwich out of it. Try it, and report back to me, please.

What would be your last meal on earth — including drinks of course.
First course would be the "Niche Egg" with Krug’s brut rosé Champagne; for the second course, Union Loafers' frisée salad with white Burgundy. The third course would be Michael Gallina’s seared diver scallops and an artichoke with Paolo Bea’s Arboreus orange wine. For the fourth course, truffle risotto with red Burgundy. The fifth course would be foie gras with 1921 Chateau d’Yquem Sauternes, and finally, the sixth course would be Pint Size’s caramel croissant with old J.J. Prum Riesling Wehlener Sonnenuhr Trockenbeerenauslese.