For Kate Wagoner, Yellowbelly Is a Return to Her Roots 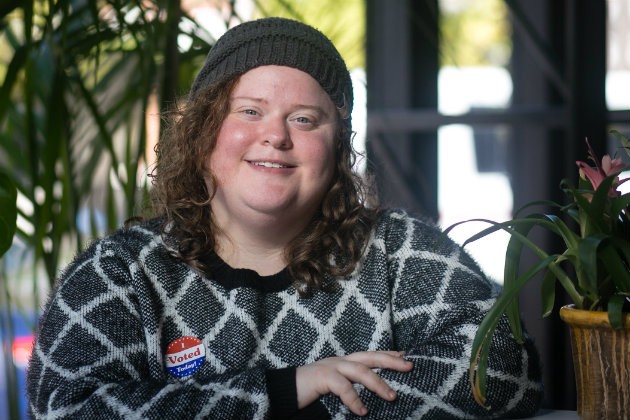 In college, Kate Wagoner was well on her way to a lobbying career, studying political science and in need of only a few extra credits to complete her degree. During her junior year, she thought it would be fun to add a home-economic style class to her schedule. It was a decision that would change her life.

"I just re-fell in love with food," Wagoner explains. "It just fell into my lap, and I knew this was something I could see myself doing. I reevaluated, and about a year later, I was moving to Atlanta and enrolled in culinary school."

Wagoner, who currently serves as the chef de cuisine at Yellowbelly (4659 Lindell Boulevard), was well positioned for a career in the kitchen. Growing up in rural West Virginia, food was not just something to eat, but a way of life. Her most striking memories involve food-centric activities with her family, whether they were fermenting sauerkraut, making apple butter or pickling vegetables. They were not gourmands, per se, but just regular folks utilizing whatever ingredients the seasons produced out of necessity.

"I remember this time of year standing around at 4 a.m. making apple butter or breaking down whole hogs to make sausage," Wagoner recalls. "It didn't register to me at the time as anything special; it was just who we were. Looking back, I see the romanticism of it and that it was a huge part of my life."

Wagoner drew on these experiences in culinary school, and her talent impressed one of her culinary instructors so much that he introduced her to celebrity chef Richard Blais. Wagoner began working for Blais at his Atlanta-based operations, first as a sous chef and eventually as his personal assistant and culinary production assistant. The job took her around the world, and eventually, she landed in California to help Blais open the acclaimed Juniper & Ivy.

Wagoner enjoyed her transient culinary lifestyle, but when she and Blais got involved with Travis Howard and Tim Wiggins on the Yellowbelly project, something told her she wanted to settle down. When Blais asked Wagoner to be his person on the ground in St. Louis to help execute their vision, she jumped at the chance to settle in a place that brought her back to her roots.

"The ingredients and culture here share so much with my background, and I identify with it," Wagoner explains. "That's so important."

She was also excited about the concept.

"I was jazzed about bringing something new and exciting to a city that can't just drive to Baja or Tijuana for the weekend," Wagoner says of the restaurant's seafood focus. "Hawaii is just a hop, skip and a jump away from San Diego, but the fact that we could bring that food here, using local ingredients, is really exciting."

However, her biggest reason for settling down with Yellowbelly has to do with her respect for Howard and Wiggins, a management team she describes as kind, genuine and two of the best she's worked with.

"Travis and Tim are the cream of the crop in the industry anywhere, not just in St. Louis," Wagoner says.

As chef de cuisine, her job is to help execute Howard's and Wiggins' vision for Yellowbelly, as well as to serve as the eyes, ears and tastebuds on the ground for Blais, who oversees the restaurant's culinary direction from California. Currently, that involves rolling out the restaurant's brand-new lunch program, which translates the restaurant's Hawaiian and seafood theme to a daytime crowd.

Wagoner can't help but smile thinking about the way her high-profile job working side-by-side with a celebrity chef has brought her full circle. Fermentation, pickling, whole-animal butchery — the things she and her family did when she was a child in West Virginia are now industry buzzwords and duties she performs on a regular basis. It's helped her stay connected to who she is, quite literally.

"Now it's this hip thing, but as a kid, it was all about just using what we had," Wagoner says. "In my home kitchen, I have my grandmother's paddle we used for making sauerkraut. It brings it back full circle."

Wagoner took a break from Yellowbelly's kitchen to share her thoughts on the St. Louis food-and-beverage scene, her love of podcasts and pizza, and how she'd love to have some super-human powers to execute Yellowbelly's "Oysters and Pearls" dish.

What is one thing people don’t know about you that you wish they did?
I spent some time working in California. A lot of the Baja influences on the menu are my way of sharing the amazing food I had on Tuesday night trips to Mexico.

What daily ritual is non-negotiable for you?
Listening to my favorite podcasts, specifically Starving for Attention. It’s witty and insightful.

If you could have any superpower, what would it be?
To be able to handle liquid nitrogen without freezing myself. It would make serving our "Oysters and Pearls" dish a lot easier!

What is the most positive thing in food, wine or cocktails that you’ve noticed in St. Louis over the past year?
I can’t speak to St. Louis solely this past year, but the most encouraging thing I’ve experienced lately is our ability to be fans of each other. I look at other restaurants and I’m proud and excited for them.

What is something missing in the local food, wine or cocktail scene that you’d like to see?
I didn’t think I would miss this as much, but lately I’ve been craving a California burrito. Who knows? Maybe it will pop up in some variation on our secret menu soon.

Who is your St. Louis food crush?
My list of must-eat spots grows with every single person I talk to, but the spot at the very top of my list goes to chef Michael Gallina of Vicia.

Who’s the one person to watch right now in the St. Louis dining scene?
Okay, so I’m going to kind of cheat on this question, and answer with my whole team at Yellowbelly. There’s just so much excitement and creativity happening in our kitchen. I can’t wait to see what the future holds.

If you weren’t working in the restaurant business, what would you be doing?
I studied political science in college, but I can’t seem to stay away from restaurants. At the end of the day it’s where I really want to be.

Name an ingredient never allowed in your restaurant.
Overfished product. Sustainability and caring for our environment are key to good products for future generations.

What’s your food or beverage guilty pleasure?
At the end of the day, I just want a slice of pizza. I don’t care where it comes from ... just a greasy slice of pie.

What would be your last meal on earth?
The Crack Shack! I would want a "Firebird" sandwich and a "Cookie Monster" shake, made by one of my favorite friends and kitchen comrades, Laney. If you find yourself in Southern California, it's an absolute must.