At the Chocolate Pig in Cortex, Decadent Desserts Are Only Part of the Menu

Did you know a pig’s orgasm lasts 30 minutes? Well, the restaurateurs at the Chocolate Pig (4220 Duncan Ave, 314-272-3230) are fully aware of that fact — and they think if you stop in, your food orgasm might last even longer.

The newly opened restaurant inside Cortex combines elevated comfort food with the decadence of chocolate desserts, which makes sense in light of its pedigree. The Chocolate Pig is part of the 23 City Blocks Hospitality group, which also owns the Caramel Room at Bissinger's, Handcrafted by Bissinger's and Lumen private event space at 23 City Blocks Catering.

General Manager Stephen Bleisch raves, understandably, about the dining space. He explains that the building is shaped like a rounded bowtie, so there are no right angles inside or out. The restaurant keeps this theme, as the walls and fixtures are all rounded and make each part of the restaurant feel like it flows into the next. The bar area is separate enough from the main dining room that you can have a quiet meal, and many of the booths feel completely private in their own nook. The restaurant can hold 124 customers inside and up to 200 during the spring and summer when the outdoor patio will be opened complete with a fireplace and relaxing chairs. 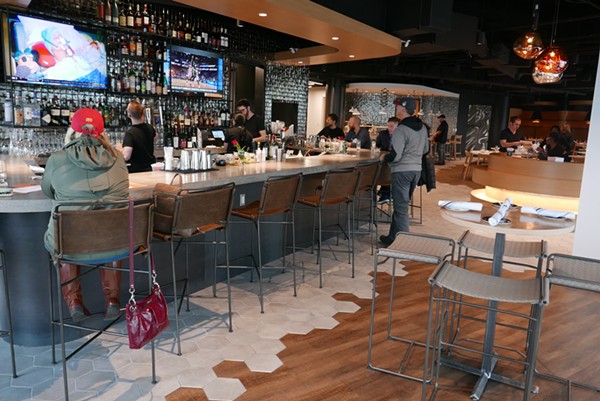 The Chocolate Pig has a fully stocked bar complete with just over 50 bottles of wine and sixteen beer bottle selections and several more on draft, as well as a fun cocktail list. One cocktail is even called “the 30 Minute O” for the pleasures all pigs get to enjoy (though you might devour it much quicker than that).

The restaurant will also offer a grab-and-go market for a quick breakfast or meal throughout the day. There will be breakfast sandwiches, paninis, and coffee courtesy of a partnership with Kaldi's. Draft cold brew and kombucha will be on offer as well.

Head Chef Patrick Russell was recruited for the job from Virginia. He was drawn to the opportunity in part because of the location. “Cortex is a really cool community,” he said. At the back of the restaurant, he butchers whole hogs, using different parts for anything from the pork chop entrée to the chocolate-covered bacon offered on a milkshake.

Russell emphasizes the importance of inclusivity in the menu options. The restaurant offers vegetarian, vegan and gluten-free selections, among others, so that everyone can find something they will be excited about ordering. The restaurant believes its vegan options are just as good as the meat options, not just a backup checking a box.

Head pastry Chef Tyler Davis was recruited from a job at Element, where he originally “fell in love” with making pastries. "Nothing is going to be average; everything has a little bling to it," Davis promises.

His favorite dessert on the menu is the passion fruit tart, but he’s most proud of the "Peanut Butter Bomb," which combines dark chocolate, peanut butter mousse, nitro berries, peanut butter cookie crumble and a mixed berry sauce. The restaurant features a pastry show kitchen; sit at the bar, eat from any menu (not just the dessert one) and watch the pastry team at work. And go ahead and ask questions, Davis says — the entire staff is happy to discuss their work. The restaurant plans to feature four different seasonal pastry menus throughout the year, along with weekly specials.

And that's not the only place that flavors typically relegated to the dessert section will make an appearance on this menu. Davis and Russell plan to collaborate regularly on items that combine their expertise, including the chocolate-covered bacon.