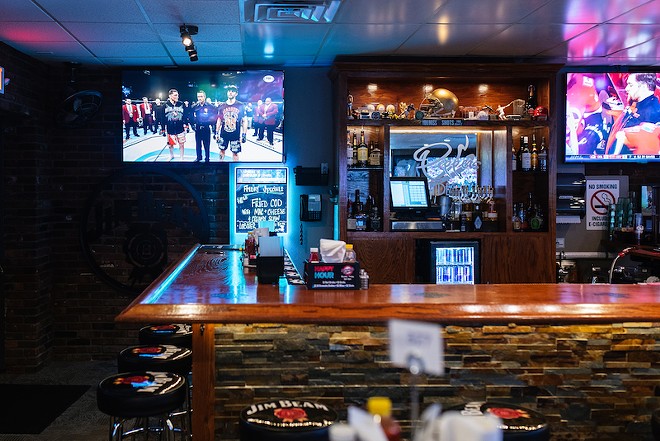 When longtime restaurateur Johnny Daus III closed his beloved Johnny’s in Soulard a little over than a year ago, his plan was to ride off into the proverbial sunset. He hoped to enjoy a slower pace with his toddler son, Johnny Daus IV, after working and owning restaurants since he was twenty years old.

Those plans have been more than slighter altered with the opening of Johnny’s West (12068 Dorsett Road, Maryland Heights; 736-5646) earlier this month. “Just when I thought I was out, they pull me back in,” said Daus, in an obvious Godfather Part III reference. “A friend called me up, and really wanted to start a restaurant out west. The plan was to use my name and my recipes, and bring the success of the original Johnny’s to Maryland Heights.”

Indeed, much has stayed consistent at the new Johnny’s, despite the change in zip codes. The waitresses are still scantily clad, the service is friendly, and the Cajun-inspired menu turns out top-notch bar food in a low key environment. The main difference in the new Johnny’s is the massive upgrade in square footage. The new location is housed in the old Dorsett Inn Bar, which closed its doors after 40 years in business this spring.

The floor plan is largely the same, except the back room now houses a second bar, and the pool tables and games are gone. The interior is now virtually covered in TVs, with more than 40 flatscreens decorating the space. The stage from the Dorsett Inn days is still intact, and plays host to live bands on Wednesday, Friday, and Saturday nights.

Johnny’s West is open for both lunch and dinner service, and packs in a happy hour crowd during the week. Every Wednesday night is ladies night from 5 p.m. to close, and features weekly performances by local band the Well Hungarians. Along with the aforementioned live music three nights a week, a DJ plays most Thursday nights to keep the party going. (A full event calendar can be found on Johnny’s website and Facebook page.)

The food at Johnny’s has always been a standout, and those decades-old family recipes have also made the move out west, including the signature wings and many of the Cajun dishes, like gumbo and red beans and rice. 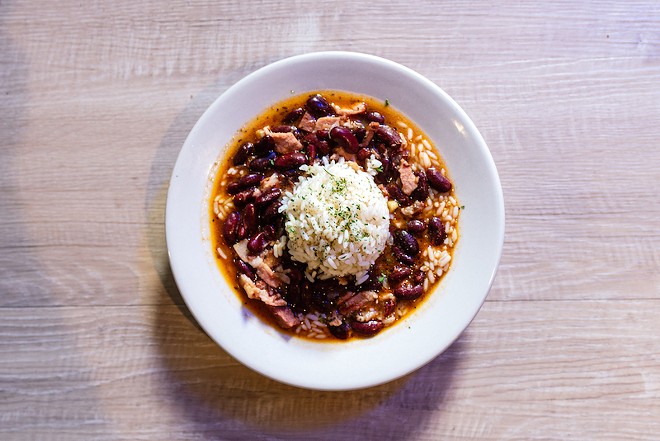 There is a lot of talk about who in town makes the best toasted ravioli, and if the ravioli at Johnny’s aren’t in the conversation, it would be a mistake. They are hand-breaded daily, and packed full of ground sirloin and Angus beef. “We don’t use ground beef, period. Even our burgers are a mix of brisket, Angus and sirloin,” Daus says. The menu has been an evolving labor of love for the past 30 years, and Daus’ newest creation, “Voodoo Shrimp,” or jumbo shrimp tossed in a Cajun cream sauce, is sure to be a house favorite.

Johnny’s is largely a beer-and-a-shot kind of place, although it does serve a signature cocktail made with Effen blood-orange vodka and lemonade. The full bar also serves up a variety of martinis, but at press time, the drink menu was not complete. The beer selection is predominantly InBev products, but with a few local craft favorites from O’Fallon Brewery and Urban Chestnut.

The move west may have taken Johnny Daus out of an early retirement, but one thing's for sure: the same spirit that made Johnny’s in Soulard a success for so many years has found new life in Maryland Heights.