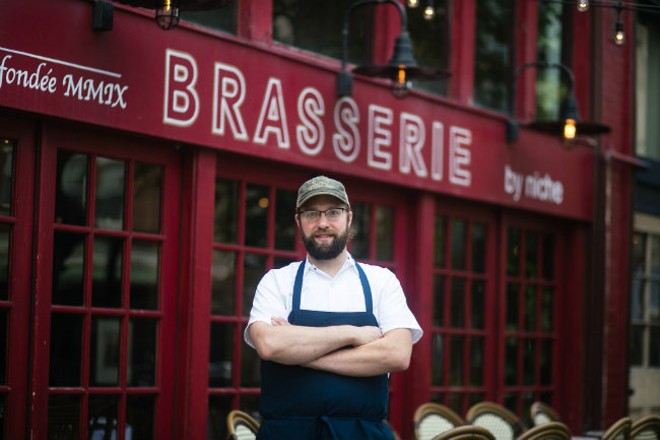 As a little kid running around the dining room of the legendary Spiro's in Bel-Nor, Alex Feldmeier seemed destined for a life in the restaurant business. Still, his uncle, legendary local restaurateur Spiro Karagiannis, did his best to dissuade him.

"He told me to be a pharmacist," Feldmeier laughs. "He always told me it pays better, it's cleaner and I wouldn't have to work the same hours as him."

Having just been promoted to executive chef at the Central West End mainstay Brasserie (4580 Laclede Avenue, 314-454-0600), Feldmeier clearly did not take his uncle's advice — nor did he have any intention of doing so. From the moment he began working at Spiro's as a kid, washing dishes and bussing tables, Feldmeier had the restaurant bug.

He carried it with him to college. Straight out of high school, he enrolled at the University of Tulsa, but nothing there captivated him the way restaurants did, and he got the feeling that nothing would. After a brief stint taking general education requirements, he realized his passion lay in the kitchen jobs he had taken to help him pay the bills. He felt certain that he should leave school and pursue his passion as a career.

Feldmeier left Tulsa and enrolled in culinary school in Chicago. However, his real education began during an internship at that city's acclaimed Everest restaurant, where he was exposed to elegant, ultra-traditional French cuisine. It was love at first sight.

"It's where I really learned about French food, and working under the chefs there was the biggest influence on my cooking career," Feldmeier explains. "I fell in love with French food, but it was the chefs and the experience of working there that most influenced me. It was intense."

Coming from mostly mom-and-pop operations, Feldmeier saw Everest's traditional French kitchen set up as an eye opener. At first, it was almost too intense, but he ultimately thrived, staying on for two years. He might have stayed longer, but personal reasons took him to Phoenix, where he worked at a resort for eight months before deciding to come home to St. Louis.

"I feel like I lucked out getting into cooking here when I did," says Feldmeier, who landed a gig at the now-shuttered icon downtown An American Place. "I got to work side by side with [acclaimed chef] Larry Forgione. He had good stories to tell. But really, I got to work with so many talented people and see how far we have all come."

Both An American Place and Monarch, where Feldmeier subsequently worked, were training grounds for the city's top culinary talent, and he was no exception. After Monarch closed, he went on to another titan of the St. Louis food and beverage scene, Niche, where he began the rise through the ranks that would lead him to Brasserie and his recent promotion to become its top chef.

Feldmeier credits some of his success with Niche Food Group, as well as his other jobs, to his unique role in the culinary field: a cook who is comfortable with both the savory and pastry sides of the kitchen. That has allowed him not only to be a utility player, but has also given him a unique perspective.

"People always say that pastry has to be precise and measured, and it does to a certain extent, but I'm not a super big believer in that," Feldmeier explains. "If you have baked a cake enough, you can just feel when something is off or right. It's the same with savory. Something I learned from [chef] Joel Reno at Everest is that regardless of what side you are on, you can always learn from the other and take components of it to incorporate it into what you are doing."

Feldmeier insists that he doesn't dare touch the pastry program at Brasserie. "That's Elise Mensing's job," he laughs. He also insists that he sees his role as executive chef there as more of a steward of what's already been established than as someone there to push for big changes.

"Change can be scary, but just because there is a new name doesn't mean you are going to have a different experience there," Feldmeier says. "We have a winning formula. And no, the roasted chicken isn't going anywhere. People would not be able to handle that."

Feldmeier took a break from Brasserie's kitchen to share his thoughts on the St. Louis food-and-beverage community, his commitment to black coffee and why he'll always come back to Cinnamon Toast Crunch.

What is one thing people don’t know about you that you wish they did?
I am a very shy person. I get nervous every time that I go out into the dining room at Brasserie, but it’s because I care about how each and every dining experience is going for our guests.

What daily ritual is non-negotiable for you?
Black coffee in the morning.

If you could have any superpower, what would it be?
Probably teleportation. It would be so nice to finish a shift and immediately be home.

What is the most positive thing in food, wine or cocktails that you’ve noticed in St. Louis over the past year?
This extends way past the last year, but the sense of camaraderie among the entire St. Louis food community. Everyone seems to be friends with each other and supports each other.

What is something missing in the local food, wine or cocktail scene that you’d like to see?
I don’t get out all that much, and there has been so much happening in the food scene that I have not experienced. It’s hard to say what’s missing when there is so much I haven’t tried.

Who is your St. Louis food crush?
Either Rick Lewis at Grace Meat + Three, one of my oldest industry friends since An American Place, or Brian Moxey at Sardella. Anyone who has ever had hot-dog casserole for family meal will understand why.

Who’s the one person to watch right now in the St. Louis dining scene?
Brian Moxey at Sardella, for sure. Sardella might just be the perfect place for him to do the food in which he is so incredibly knowledgeable and experienced.

Which ingredient is most representative of your personality?
Probably an onion, with the many layers cliché, but it can also be sweet with a little work.

If you weren’t working in the restaurant business, what would you be doing?
I probably would have stayed in college and would have a boring office job.

Name an ingredient never allowed in your restaurant.
Nothing. There are certainly things that I am not a fan of, but if other people like something, I certainly will not make it off limits.

What is your after-work hangout?
Most days, it is at home on my couch, but every once in a while, I’ll go around the corner from Brasserie over to iTap.

What’s your food or beverage guilty pleasure?
I don’t have a crazy sweet tooth, but I would say super-sugary kids’ cereal, Cinnamon Toast Crunch, especially.

What would be your last meal on earth?
Probably coq au vin. It’s not something I had growing up, but it sure is one of my favorite things to eat now.