Like many downtown loft dwellers, Corey James and Austin Blankenship were big fans of Bella's Frozen Yogurt, the independently owned froyo shop at 11th Street and Washington. It wasn't just proximity, although they lived right across the street. It also served really good yogurt.

But after Bella's closed three years ago, James and Blankenship didn't just mourn its passing like its other fans. The partners decided to do something about it.

Last Saturday, James and Blankenship opened the doors to Bella's Frozen Yogurt (1021 Washington Avenue, 314-553-9261). It's got the same name, the same teal accents and even the same yogurt supplier. But it is, in some ways, a much different shop.

It's not just that James and Blankenship are unaffiliated with the shop's previous owners, or that they've done some renovations (woodwork and subway tiles now join exposed brick accents). It's that they have ambitious plans for a host of collaborations with local food purveyors, a line of offerings that include gluten-free, sugar-free, vegan and dairy options, and even a full line of smoothies that use frozen yogurt as the base. And eery day, they buy the fruit they're using for toppings fresh from the farmers' market.

"It's not a traditional frozen yogurt shop," Blankenship says. "We wanted it to be a place where everyone could come and get something to eat."

So why keep the name? "Our dog is named Bella," Blankenship says — a remarkable coincidence, as both the cockalier and her teal blue collar predated the original shop. It felt like a sign. 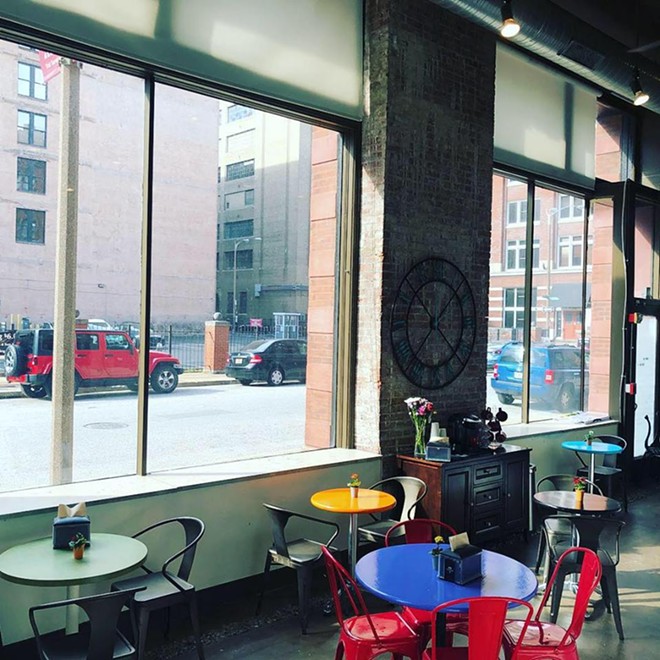 Before they opened the shop, James was a hairstylist; Blankenship spent fifteen years as a supervisor with McDonald's. In April, he left that career to focus on Bella's, and both partners are now all-in. Stop by for a visit, and you'll surely meet one or both.

The partners are getting their yogurt from Honey Hill Farms in Arkansas, but one machine will always be reserved for a flavor they make in-house, Blankenship says. Right now, that's five spice, an autumnal blend suggestive of chai tea or pumpkin pie. It's proven such a hit that it had sold out in just a few days (they intend to be back in stock today). They're already working on collaborations with Bissinger's Chocolates and Red Hot Riplets (yes, really) for truly unique St. Louis tastes. "We're getting everything as much as possible from St. Louis," Blankenship says. "We don't want to be like a chain frozen yogurt shop that is everywhere."

But as much as they want to push the creative envelope, Bella's also meets simpler needs. "We hated when the original Bella's closed because the owners did everything so well," Blankenship says. "We loved coming here. There just aren't that many dessert options downtown."

Bella's is open daily from noon to 9 p.m. For more info, see its Facebook page.