Cardwell's at the Plaza Will Close This December

Chef Bill Cardwell announced the news today. “I’ve been inside a kitchen cooking, teaching and running one or more large restaurants for five decades,” he said in a prepared statement. “Once the celebration is behind us, I want to play with my two grandchildren. I want to ski. It’s time to live a little.”

Cardwell said that his lease was up at the end of the year, and suggested that the high-end shopping mall in which his restaurant is located forced his hand a bit. In his statement, he explained that Plaza Frontenac ownership wanted to "broaden" the shopping center's dining options. They approached him about doing something new — but they wanted a ten-year lease.

“I’m just too tired to take on another huge endeavor like that,” said Cardwell. “Anyone who knows me understands that I’m a hands-on guy. I’m completely committed to providing a great dining experience for our guests each and every day.” 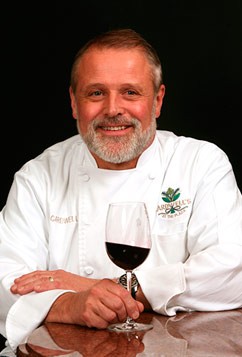 Cardwell opened his first restaurant, Cardwell's in Clayton, in 1987. (That became Herbie's two years ago in a creative hand-over that allowed Cardwell to relinquish control, even as his employees to keep their jobs.) Cardwell's at the Plaza followed in 1994. In 2008, Cardwell opened BC's Kitchen in St. Charles with a friend, but he sold that restaurant in May.

In the release, Cardwell said he was announcing the changes at Plaza Frontenac early in order to give his staff time to line up new jobs for 2019. He also wanted the chance to say goodbye to his longtime customers.

“You can’t be in business as long as I have without loyal diners," he said in his statement. "I wanted time to thank the people who have been so good to me over the years before I moved on to the next chapter in my life.”