Michael Fricker of Cinder House Feels Like an Oyster 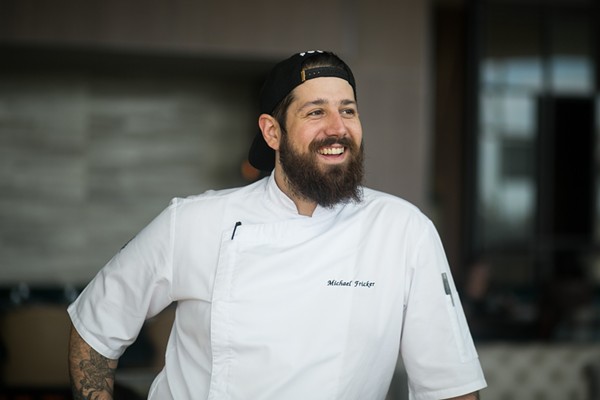 Growing up in Cape May, New Jersey, Michael Fricker began working in kitchens not so much by choice, but because it's what you did in a tourism-driven coastal community.

"In the winter there are about 3,000 residents, but during the summer it goes up to 78,000," explains Fricker. "It's 100 percent hospitality driven — just hotels, bed-and-breakfasts and fishing. Everyone worked in either hospitality or fishing. That's just how you made your money."

Now executive sous chef at the new Cinder House (999 N. 2nd Street, 314-881-5759), Fricker may have originally felt the restaurant business was his only option, but once he got there, he realized he had a passion for it. At first, he began in the front of the house, working at a quintessential touristy lobster shack where he bussed tables and ran food. Eventually, he moved his way up to a service bartending position, making rum runners and frozen drinks. The pace was bruising, but Fricker found the environment exhilarating.

Still, he did not consider the business as a long-term career path, opting instead to go to college where he majored in theology and Jewish studies. About halfway through his degree program, however, he began to feel antsy. Eventually, he was overcome with the feeling that he was not on the right track.

Fricker left college and traveled a bit before returning to Cape May and getting a job in a restaurant. This time, though, he found himself in the back of the house, where it felt as if a light switch had been turned on. He was hooked.

"I fell in love with the culture, the stress, the adrenaline, the heat, the knives," Fricker explains. "It was electric. We would go to the docks in the morning to pick up fish, and we would butcher and serve it that night. Being able to work with living organisms — whether it was fish or mushrooms or whatever — meant understanding that these were living things that needed to be respected. You had to have an appropriate understanding of what you were doing."

Fricker moved from Cape May to Portland, Oregon, where he enrolled in culinary school at Le Cordon Bleu. After graduating, he traveled around, staging and working everywhere from Seattle to Oaxaca until he felt the pull to come home to New Jersey. This time, he was able to get a gig at an elegant boutique hotel running several of the property's food service outlets and assisting with its massive wedding program.

Fricker was happy at the hotel, but he wanted to be a part of something bigger — a brand with international recognition where he could advance his career. When a recruiter informed him of a position at an Italian restaurant at the Four Seasons in St. Louis, he was curious.

"I didn't know how to cook Italian food — being from Philly and New Jersey, I don't know how that happened," Fricker laughs. "The recruiter said he thought it would be a good opportunity for me, and the next thing I knew, I was moving out here four weeks later."

Fricker knew little of St. Louis before he came for his job interview, but he was immediately smitten by the parks, architecture, overall cleanliness of the city and the great restaurants.

It helps that Gian Nicolo Colucci, executive chef of the Four Seasons St. Louis, took him to Olio. "I remember sitting outside eating octopus and beet salad and hummus in this gorgeous restaurant and thinking, 'Wow, this could be home,'" Fricker recalls. "I wanted to see what St. Louis had to offer."

Much has changed since Fricker moved here two years ago, not the least of which was a major transition for the hotel's dining options. The Italian cuisine he was initially drawn to at the hotel's acclaimed restaurant Cielo has been replaced with Gerard Craft's Latin American-inflected Cinder House, with Fricker one of the main point people responsible for making sure it was a seamless changeover. To his credit, it has been.

"The staff has taken to it and bought into the concept immediately," Fricker says. "We told them that you have to evolve and change and update and become new and better. Change is difficult, but if we go through it together, we will come out on the other side better."

As for Fricker, he feels that he is also evolving, not just with the concept but with the move to the Midwest — the most landlocked place he's lived. However, he says that leaving the coast and its bounty hasn't been hard and has not changed the way he approaches food. In fact, it's underscored his philosophy.

"The one thing moving away from the ocean has taught me is that you have to let the ingredients speak, no matter where you are or what you are doing," Fricker says. "Every region has beautiful product in its own right, and you have to understand where you are and allow dishes to go where they are supposed to go. You never want to force something. As you create, you have to evolve."

Fricker stepped away from the kitchen to share his thoughts on the St. Louis food-and-beverage community, the virtues of coconut water and why his dream meal is a taste of home.

What is one thing people don’t know about you that you wish they did?
That I’m actually a pretty shy person. I think it comes from growing up in a very small town. Even though I’ve traveled and moved around a lot, it still takes a lot for me to get comfortable with people. This is one of the reasons I love the back of house so much.

What daily ritual is non-negotiable for you?
This one has started kind of recently but I’m trying to cut the extensive amount of coffee that I drink, so I’ve been drinking coconut water every morning. It has become something that really wakes me up and gets me ready to go on my drive to work.

If you could have any superpower, what would it be?
Without a doubt, flying — the ability to travel and have an adventure on a dime would be incredible.

What is the most positive thing in food, wine or cocktails that you’ve noticed in St. Louis over the past year?
The sense of community. I’ve never felt so supported in the industry before. It’s incredible how close-knit everyone is and how open they are to letting new people in. It’s really different and great here in St Louis. There are so many cool collaborations that come out of that; it's really fun to watch and experience!

What is something missing in the local food, wine or cocktail scene that you’d like to see?
For me, personally, its late-night food. It's kind of limited after 10 p.m., and since I usually don’t get done until 11 or so I would like some more options for that. I love that Good Fortune is doing the late-night Friday thing and am really excited to check that out. Also, something that I loved when I lived in Philly was a speakeasy — a legit one that is hard to get to and an adventure to find. It makes the experience so much more worth it when you have to seek it out.

Who is your St. Louis food crush?
I’m not sure it is a crush, but what Matt McGuire has done at Louie is amazing. The food is so good. You can taste the care and love they put into it. They have a really strong and dedicated staff and it reflects in the product.

Who’s the one person to watch right now in the St. Louis dining scene?
It's difficult to choose one. I'm excited to see what Brian Moxey does taking the lead at Sardella; I think that’s going to be a lot of fun. Alex Henry from Nixta does some great, really fun food. Alex Herman who did the Young Blood dinner is one to watch as well. I will say I’m pretty in love with my staff too; I think they have such a desire to be great and an openness to learning that is fun to watch. There is some real talent here that I’m excited about.

Which ingredient is most representative of your personality?
This is a tough one. I think it's an oyster. I was raised in a beach town and so the ocean is so important to who I am. Also it takes a little work to get me to open up.

If you weren’t working in the restaurant business, what would you be doing?
Fishing. My hometown industry is hospitality and commercial fishing, so if I didn’t start in restaurants I most likely would have ended up on a boat.

Name an ingredient never allowed in your restaurant.
There really aren’t any. I try to respect food enough to never close the book on something. I think the only answer is something that isn’t in season and tasty yet.

What is your after-work hangout?
I have a few. Taste Bar is the big one for me because they have great late-night snacks and always fantastic drinks. The Heavy Anchor has become one of my favorite dive bars — fantastic beer selections and just a really fun spot to be with friends. Tick Tock Tavern is another that has become a mainstay for me.

What’s your food or beverage guilty pleasure?
Without a doubt, chocolate milk. We drink a fair amount of chocolate milk. It all steams from our chef de partie Austin Beckett, who would make it in a gallon milk jug for the kitchen when we finished up.

What would be your last meal on earth?
Oysters, beer-steamed crabs in Old Bay, grilled corn on the cob and you-peel shrimp. I'm from a coastal town and I can't help myself around those items.