Squatter's Cafe Will Close October 31, But Bulrush Is Coming to Grand Center 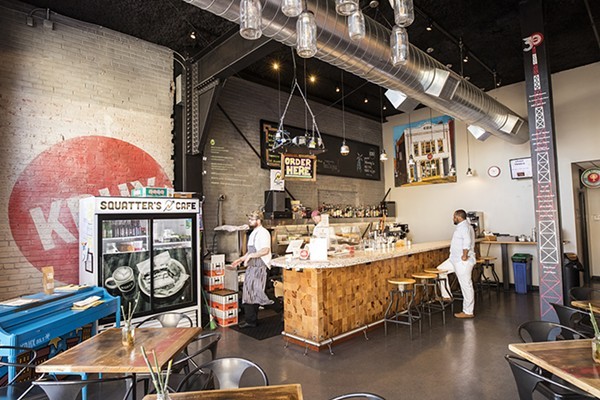 Squatter's Cafe (3524 Washington Avenue, 314-925-7556) will be closing after lunch service on October 31. But don't despair — it's actually just one piece of a bigger puzzle that involves some seriously good news.

That news? Yesterday, Chef Rob Connoley finally announced a location for his long-awaited Bulrush. The restaurant, which will specialize in the cuisine of the Ozarks and utilize the acclaimed chef's love of foraging, will aim for an early 2019 opening at 3307 Washington Avenue.

A Missouri native who made his name in New Mexico before returning to the St. Louis area in 2016, Connoley has been clear that Bulrush was always his Plan A. But during his lengthy search for the perfect location, he ended up pursuing Plan B in the interim — the breakfast-and-lunch-only Squatter's Cafe, located in the KDHX building.

The restaurant drew acclaim, but it always came second for Connoley to his Bulrush plans. And now that Bulrush is moving forward at long last, he's posted on social media that yes, indeed, Squatter's Cafe will soon begin its final month of service.

"We had an agreement with KDHX that is coming to a close," the chef wrote on the restaurant's Facebook page today after naming October 31 as its final day of service. "With us opening Bulrush there won't be the ability to continue Squatters."

But the chef isn't going far: Bulrush will be located just three blocks east of Squatter's.

And Connoley will, to some extent, even be working with the same stakeholders. In yesterday's press release, Connoley indicates that his new landlords are Ken and Nancy Kranzberg, who were also instrumental in KDHX moving to its headquarters on Washington.

The Kranzbergs, Connoley notes in his press release, were the key to solving a problem that bedeviled him for two years — finding the perfect location for Bulrush.

"Why did this take two years? If you had told me in the fall of 2016 that it would take me two years to open Bulrush I would have thought you were nuts," Connoley writes. "Two years later I’ve learned that there are a lot more players in the game than I had in my previous restaurant, and it was ultimately an issue of finding a landlord who believed in my vision, and how that vision fits into their larger development goals.

"Specifically, finding a landlord that would allow me to put the kitchen in the middle of the room, and all of the structural changes that entails was more challenging than I anticipated. It was only when we met Ken and Nancy Kranzberg that all the pieces fell in place. Their commitment to presenting and nurturing the arts allowed me to step in and include food as art in their portfolio of arts tenants."

Connoley says Bulrush is now working with SPACE Architects to renovate the 3,400-square-foot building to include a 24-seat dining room "hidden behind a 40-seat bar. "The dining area will be a circular bar surrounding the kitchen. Guests will be invited to watch as we prepare the food, ask questions, hear about our recent forages, and allow me to serve them personally," he writes.

As for what he'll be serving, Connoley notes that his family has deep roots in the Ste. Genevieve area. He spent his childhood visiting the family log cabin in the Mark Twain National Forest — and says his memories of his time there will inform the new concept.


There I would gather mushrooms, crawdads, catch bluegills and sunfish, and explore every holler, cave and stream. That’s where my love of foraging began. The food was rooted in the German wave of immigrants to the Ozarks, heavy on sausages and potatoes, but gleaning that Southern touch of familiarity and hospitality. Cooking with the season and cooking with what we had was the norm. To this day I don’t understand when a chef serves a fresh tomato in January or a strawberry in November. That is why we rely on curing, drying, pickling and a slew of modern preservation techniques — techniques all common to Ozark preparations.

This is traditional southern cooking, and what makes Ozark cuisine unique is the combination of ingredients and techniques particular to the region (sorghum, pawpaw, persimmon, spice bush). I was fortunate to find Justin Bell to serve as Sous Chef because his upbringing was similar but even more deeply rooted in Ozark tradition. Foraging is a lifestyle that we’re both well-versed in that allows us to cook this style of food, and both of our contemporary cooking training will allow us to present this food in a new way giving it the attention that it deserves in the larger culinary conversation.

And while Squatter's Cafe impressed critics and diners alike with its whimsy and execution, Connoley is clear that he has higher aspirations for his new project.

"Make no mistakes," he writes, "that we aspire to do to Ozark cuisine what Sean Brock has done for Appalachian Southern cooking."

See what we mean about good news?

To get a taste of Bulrush, you can visit its Oktoberfest "speed dining pop-up" this Friday from 6 to 10 p.m. See its Facebook event page to RSVP or for further details.

And in the mean time, may we recommend visiting Squatter's Cafe while you still can? You've got one month and one week to go — and after that, you'll be entering a period where you'll be unable to access Rob Connoley's cooking until Bulrush opens its doors. Might want to gobble up those biscuits and that gravy while you still can.