White Castle's 'Impossible Sliders' Are Now in St. Louis — And They're Glorious

by Evan Sult and Paige Brubeck 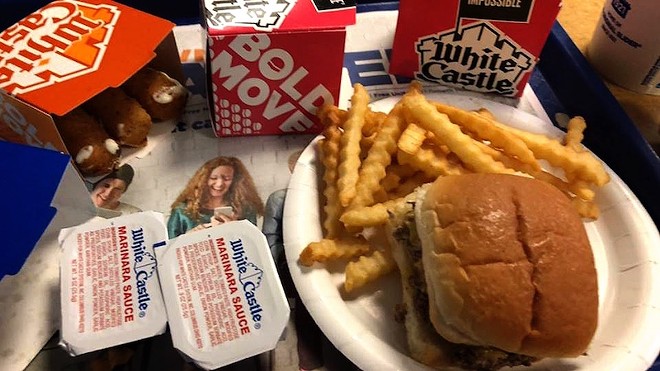 These days, concern for the environment has become pretty mainstream. But while it seems like every eco-conscious person on the internet has ditched plastic straws, it’s been much harder for people to reduce the amount of animal meat they consume — even though the meat industry is one of the world’s leading contributors to climate change and pollution, projected to pass up even the oil industry this year.

That’s where Impossible Foods comes in. The California company makes a faux meat from plants for people who care about climate change but who are reluctant to give up “meat,” even if they know it’s having a negative climate impact. Impossible Foods founder Patrick Brown has repeatedly said he’s not interested in selling to vegetarians, who already have lower emission diets, even stating in a 2017 interview with Recode.net that “every time we sell a burger to a vegan or a vegetarian, it’s actually a complete waste in terms of our mission.”

See also: The Impossible Burger Is Now in St. Louis — Without Meat, but With All Its Flavor

Thanks to a recent PR campaign and marketing push, the burger has been turning up at restaurants all around the country, and here in St. Louis at places like Royale, Polite Society and Llywelyn’s, among others. It’s often positioned as an intriguing new high-end vegetarian option, despite Brown’s stated mission, and sold as something of an expensive curiosity.

But the Impossible Burger just got a lot more accessible and a lot less pretentious this week, when White Castle added it to its menu. The Ohio-based fast food chain, known primarily as a provider of low-grade, late-night face-stuffage for soaking up the alcohol, has begun offering an animal-free version of its infamous sliders.

If it was never intended for vegetarians, White Castle’s newest menu item demands the real test: What do meat-loving omnivores think of it?

The only way to do it is to do it right, which is to say deep into a weekend night, between bars, under light to medium inebriation. We pull into the drive-thru at Manchester and Vandeventer on Saturday night with Julian, a musician in his twenties from the Grove who is very familiar with the classic White Castle slider. He eats pretty much anything, and has no intention of going vegetarian.

“To be fair,” says Julian before we get started, “if I go to a fast food joint, I’m not expecting the highest quality of anything. I want something hot that’s salty to throw in my craw.”

We order a sack of Impossible sliders and fries. Since they're still a new item, the voice on the other end of drive-through speaker informs us it will be a few extra minutes. We sit in the car, discussing St. Louis' various late-night fast food and greasy spoon options, and soon enough we’ve got a hot bagful of burger in our laps. Julian receives his stack of burgers in their little cartons printed with the White Castle logo and its current slogan, “Bold Move.” “White Castle is ALWAYS a bold move,” Julian says knowledgeably.

We talk as we chow down, chasing bites of slider with those undeniable crinkle-cut fries. Julian pauses to consider the meal in his hand. “If I didn’t know it wasn’t meat, I probably wouldn’t know any better,” he declares. “It tastes like a real White Castle burger.” He looks at the half-chomped slider. “Even just eating this little bit here, it tastes like meat.”

We keep going. One of us, Evan, finds himself eating his own clutch of White Castle Impossible burgers and fries, despite being vegetarian for over a decade. It’s surreal, not unlike being in one of those dreams where you find yourself mid-cigarette even though you long ago quit smoking. Knowing full well that you're not eating an animal’s flesh, the fact remains that you are definitely experiencing eating meat. This stuff hits just like a fast-food meal always does, triggering the deep parts of the brain to override the rational mind and revel in the salt and grease and calories and flavor intensity. You feel woozy and guilty and yet already wishing you'd ordered at least one more of these little onion-grilled greasebombs.

Julian keeps going. If we’d just eaten a bag of unidentified sliders, and then afterwards revealed that they weren’t in fact made of cow, he says he probably wouldn’t have known. “It’s surprising how much it tastes like meat,” he says. “I’m into it.”

And that is the simple mission of Impossible, fulfilled: Guy goes to fast food place, guy orders burger — only this time, the burger saves 75 square feet of land, one half tub of bathwater and eighteen miles of emissions in a car compared to a burger made from cows. Guy chows down contentedly. The world’s resources are consumed a tiny bit less, times millions and then billions of sliders, leading to significantly less total CO2 production, less methane production, and less rainforest destruction. Guy heads out to next bar, belly full of burger.