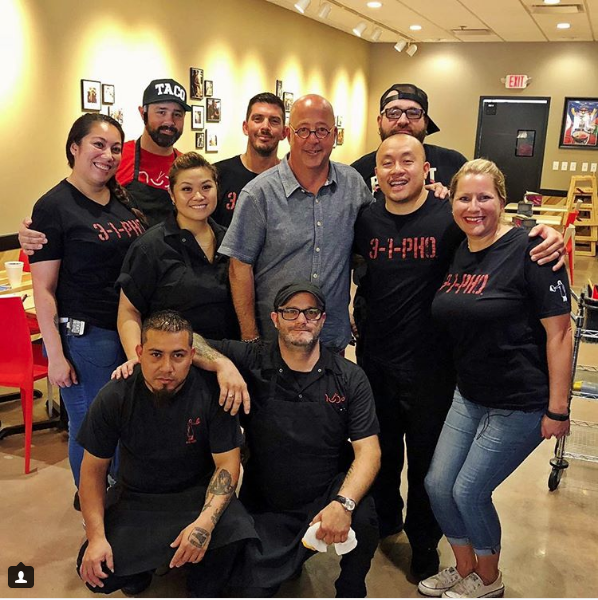 The chef was reportedly scouting locations for an episode — and really, isn't it about time? The St. Louis episode of Bizarre Foods: Delicious Destinations premiered well over three years ago; a lot of good places have opened in that time.

And Zimmern, to his credit, wasted no time exploring, visiting both old favorites and some new hotspots.

The country-style fast-casual spot in the Grove posted a photo, saying, "It was a blast having y’all here! And thank you to our guests for your attendance we truly have the best industry family around!"

Today was a blessing at that! Thank you @chefaz for joining the Grace Family for lunch! It was a blast having y’all here! And thank you to our guests for your attendance we truly have the best industry family around! #meatandthree #local #stlrestaurants #travelchannel #stlgrace #gracemeatandthree #travel

Zimmern apparently did his bit to drive traffic to the Hill location ... or maybe just take down a hot salami sandwich.

Hey guys! A special guest is at the Original location today. His name starts with Z and ends in immern

"THANK YOU @chefaz for hanging with the #NudoSquad today! Humbled and honored to share our food and family with you," the restaurant posted on Instagram.

Zimmern then made another Thursday afternoon stop — this one at Smoki O's (1545 N. Broadway, 314-400-7693). RFT critic Cheryl Baehr has raved about its snoots and its pork steak, and Zimmern is apparently a fan as well, as the photo below proves:

Believe it or not, though, the insatiable Zimmern still wasn't done. An evening post from Pastaria (7734 Forsyth Blvd, Clayton; 314-862-6603) suggested he finished his night with dinner there, posing for photos with its James Beard award-winning chef/owner Gerard Craft.

"Thank you for dining with us, Andrew Zimmern," Pastaria wrote on Facebook. "Hope you enjoyed your visit to STL."

And hey! By the looks of things, he totally did.

"Thank you St. Louis," Zimmern posted on Twitter this morning, tearing himself away from national politics long enough to post a lovely photo of the St. Louis sunrise. "Love this town and love the people even more."

Thank you St Louis! Love this town and love the people even more. 📷 from @slvsmn https://t.co/gsILYXTyiS pic.twitter.com/Oqdg93mt6T

Editor's  note: We updated this post after publication to include a photo and details about Zimmern's trip to Smoki O's.