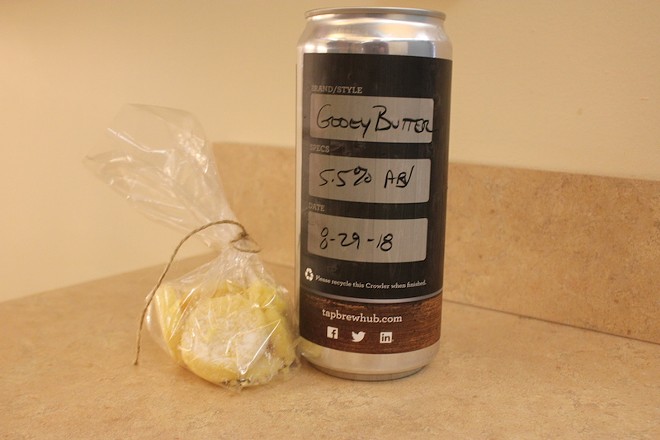 Gooey butter cake is a St. Louis favorite with a semi-mythical origin, just like most regional specialties. Supposedly someone accidentally dropped a ravioli in the fryer — no, no, wrong St. Louis delicacy. In gooey butter cake's origin story, an unknown culinary Prometheus put too much butter in the batter and created a delicious cake that makes your teeth tingle.

But the Gooey Butter Blonde Ale from Brew Hub (5656 Oakland Avenue, 314-833-5453) is no accident. Originally brewed as a lark for St. Louis Craft Beer Week, it quickly sold out. As word of mouth spread, the Brew Hub team had no choice but to recreate the ale that drinks like dessert.

So is it worth drinking? Armed with a quart can of the elixir and a festive bag of gooey butter cookies as a taste profile guide, a handful of RFT staffers gathered for an exploratory sampling session. And we can report the answer is yes ... under certain circumstances.

The ale is a 5.5 percent ABV brew that gives off a strong scent of butter when opened. That aroma grows stronger when you pour it into a glass. A standard pint glass concentrates the smell in an almost overpowering manner; a tulip glass might lessen the sensation, but we didn't have one on hand. One staffer tried a shot glass and claimed that greatly diminished the effect. As always, the lesson here is experiment as you see fit.

The beer tastes remarkably — shockingly, in fact — like powdered sugar. It's sweet, obviously, but there's a heavier taste behind it that might actually be butter. It's a smooth drinker, as most blonde ales tend to be, but it has a cumulative affect: the more of it you drink, the sweeter it becomes.

As for your correspondent, I rarely stray from the Reinheitsgebot out of personal preference, so to me the Gooey Butter Blonde Ale seemed both too sweet and too cloying to contemplate drinking even as a one-off. It would probably be much more satisfying after large, hearty meal, like Thanksgiving. On occasions such as that, something this sweet would cut through the fat and taste bracing. (In my case, I was drinking on an empty stomach, which I'm told is unwise. In my defense, it leaves more room for beer.)

Still, if you're a fan of soda, candy and other sweet treats, this may be your perfect beer. In fact, I could see Harry Potter fanatics choosing this as their butter beer substitute of choice. I don't condone the Harry Potter lifestyle, but if it's for you, go ahead and live your dream. It takes all sorts to make a world.

Gooey Butter Blonde Ale is now available on tap exclusively at the Brew Hub Taproom, so if you're curious to see how powdered sugar and gooey butter can be captured in ale form, you know where to go. If not, well, they've also got Topping Goliath.