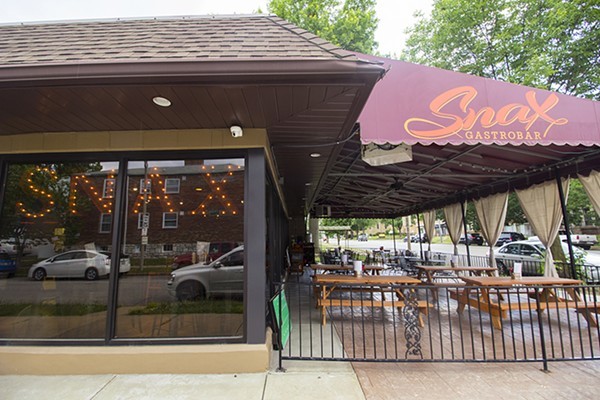 "We have so much gratitude and respect for the South City and Lindenwood Park residents who welcomed us to an amazing community," the owners wrote on Facebook. "Unfortunately, despite our passion and commitment, we were unable to sustain the volume we needed to fully continue operations. Our hearts are heavy, and we know this chapter of our story must end, but we have no regrets for the friends we made along the way. We will miss you all."

The restaurant's last night of service was Saturday, August 24. It first opened its doors in March of 2017, following the closure of J. McArthur's, which itself lasted less than two years.

Snax Gastrobar was a more casual concept from Stanley and Arlene Browne, who'd previously found success with the wine bar Robust. However, the Brownes recently closed their downtown location of Robust as well. (An Edwardsville outpost previously closed, leaving only the original in Webster Groves.)

As RFT critic Cheryl Baehr wrote in a June 2017 review of Snax, the Brownes "could have easily opened Robust 4.0. Instead, they opted to venture into different territory. That territory is a concept that places equal weight on wine, beer and cocktails, with a setting and menu that make it clear that this is a place where you're more likely to sport flip flops than loafers. To the Brownes' credit, it's a smart embrace of the low-key, family-friendly Lindenwood Park environs where neighbors are more likely to stop in for a burger and fries than a foie gras torchon."

Still, while Baehr praised the atmosphere and noted the "almost-full dining rooms" she spotted on her visits, she wrote that the food component was "still finding its way."

"Many thanks to our team who worked so hard to provide stellar food, drinks and service; thank you for the music, the laughs, and the inspiration; we appreciate your efforts and honestly believe we all gave our very best," they wrote. "BIG thanks to all who supported us, offered suggestions, and cheered us on. You will not be forgotten. We look forward to the next chapter ahead and hope to see you all again soon!"