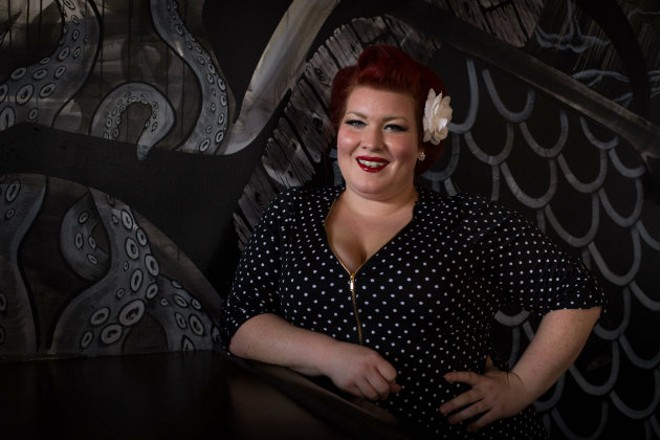 At first, the name "the Pin-Up Chef" (@yourpinupchef) started as a joke between Chloe Yates and her friends — a nickname they gave her in her teens based on her love of throwing dinner parties and her vintage-inspired look. But the name stuck.

"I've always had this style. If I could snap my fingers and have lived in the 1940s and '50s, I would do it," Yates says. "My friends started calling me this as a joke because I started having dinner parties when I was twelve and would dress up for them. Now that's how people know me, but it actually began as a way for my friends to tease me about what a goofball and weirdo I am."

Yates may consider herself a goofball, but these days, she is dead serious when it comes to building her brand, the Pin-Up Chef. It's a whirlwind that really began to pick up steam over the last couple of years, initially with her first full-time cooking gig at OSP Tap House, then as a contestant on the Food Network's Guy's Grocery Games and finally, just a few weeks ago, as the host of her first pop-up at Alpha Brewing Company. However, as Yates explains, the foundation for her culinary success started much earlier.

"It started with my grandmothers," Yates says. "My dad's mom was more of the baker and could decorate the hell out of any cake or dessert. My mom's mom did mostly did savory stuff. We'd go fishing and she'd clean all the fish and fry them up. Those are the memories I love the most."

Growing up in Pomona, Missouri, a small town just outside of West Plains, Yates recalls days spent in the kitchen where the coffee machine was always on and Grandma always had something for her to try. It was an experience that made her fall in love not just with food but in how it has the power to bring people together.

Still, Yates did not intend to end up in the food business, instead planning on going into the medical field. But school kept getting pushed back, and she found herself working to pay the bills.

Then her life was turned upside down by heartbreak. After meeting a man from England, marrying and packing up her things to move across the pond to start a new life with him, Yates found herself stranded at the London airport, denied entry into the country.

She spent eighteen months in limbo and bored to tears as she navigated the visa process, awaiting the moment she would be reunited with her husband. During that time, a friend who was opening a new restaurant, OSP Tap House, approached her about running the kitchen.

She accepted the gig, thinking it would be a temporary way to pass the time until she left the country. That would all change when she received a devastating text in the middle of the night on Valentine's Day 2017.

"I got a text from him at 2 a.m. saying that he could not longer 'do this,'" Yates recalls. "For reasons I will never fully understand, he just ended it. It was heartbreaking."

Yates threw herself into cooking as a way to take her mind off her broken heart and keep from moping and dwelling on her situation. "I lived at work; I was there seven days a week," she explains. "It was a great place to put my energy. Cooking ended up being my saving grace."

Yates was happy coursing along at OSP, gaining a following for her beer-pairing dinners and brunch. Then one day, out of the blue, she got a phone call that would would launch her career to places she never could have imagined.

"It was a Wednesday night, and I got a call on the bar's phone from someone saying they were from the Food Network," Yates recalls. "I thought it was the owner being funny, and then the woman told me she was from Guy's Grocery Games and that she'd seen my Instagram and wanted me to be a contestant on an upcoming show. I thought I was being punked, but the next thing I knew I was going through a month-and-a-half of vetting and they said they wanted me on the show. It was surreal — the craziest thing I've done in my life, next to marrying a British guy!"

Since her episode aired, Yates has been riding a wave of buzz that she still can't believe. She has since left OSP, taking on the role at Alpha Brewing Company's Alphateria as what her boss, "Plantain Girl" Mandy Estrella, calls "Cafeteria Lady de Cuisine" — essentially, the second in command. It's a position that has allowed her to not only learn about Caribbean food, but also become acquainted with other members of the area's dining community as part of the Alphateria's "Chef Friends" Sunday pop-up series.

And Yates is not just a pop-up spectator. A few weeks ago, she did one of her own, a Southern-inspired affair under the Pin-Up Chef name. It was a ton of work, she admits, but well worth the effort. She was so inspired by the event that she can't wait to do another, and even has dreams of owning her own concept one day soon.

But first, Yates has her heart set on doing a big, Great Gatsby-style event that she hopes will include other chefs — that is, if she can keep her cool.

"I've been meeting all these people, and I am getting so excited, like completely awestruck," Yates laughs. "It's really humbling. I never thought it would happen. I feel like I'm almost one of the cool kids!"

Yates took a break from the Alphateria to share her thoughts on the St. Louis food-and-beverage scene, her love of Jameson and hot dogs and why she will always be a little bit country.

What is one thing people don’t know about you that you wish they did?
I’m a country girl, born and raised off of a dirt road in a town of about 300 people. It certainly made me the woman I am today. I spent hours in the massive garden my mom planted with my cat, whom I used to dress up and put blush on (no shame). I live for the times I can get back to those dirt roads, skies so dark you can see the Milky Way, and the back-road drives with my dad and the playlists we make for each other.

What daily ritual is non-negotiable for you?
My morning concert — music on and coffee brewing while I water my flowers and, of course, sing to them. That’s why they grow so well.

If you could have any superpower, what would it be?
To be able to speak to my dog, or the power to heal people. I’m a softie.

What is the most positive thing in food, wine or cocktails that you’ve noticed in St. Louis over the past year?
I love watching St. Louis become a real food-centric city — seeing the public get excited about food that is locally sourced, real and cooked by people who are living out their dreams. I’m all for fewer and fewer chain restaurants!

What is something missing in the local food, wine or cocktail scene that you’d like to see?
We’re missing good 24-hour food spots. Sometimes you just need a decent meal you didn’t cook yourself and eat standing up.

Who is your St. Louis food crush?
Mr. Ben Welch. His Lucy Quinn pop-up was the kind of concept I can get behind. I love Southern food, and I love the reinvention of it as well. Not to mention his barbecue is absolutely to die for. That pastrami haunts my dreams.

Who’s the one person to watch right now in the St. Louis dining scene?
Loryn Felciano-Nalic. Not only is her food to die for, but she is an absolute doll! I can’t wait to see what she does next.

Which ingredient is most representative of your personality?
This may be a cheap answer, but I’ll say an onion. I’m definitely a very layered person. Some people will say I’m too strong for their taste. My mom would tell you I make anything better. And, of course, the best way to mellow me out is soaking me in water!

If you weren’t working in the restaurant business, what would you be doing?
I’d be a hospice nurse. I believe so much in creating more caring and empathetic health care, especially at the end of life. People should be allowed to live their last days with the same dignity they lived the rest of their lives with. Or a country singer. Ha!

Name an ingredient never allowed in your restaurant.
Anything other than 100 percent real butter! It’s really just a sin to cook with margarine.

What is your after-work hangout?
Most often, my living room with Desi Lou Arnez, my four-pound rescue Chihuahua, and watching Cardinals baseball. But I do love a good hole-in-the-wall bar with a Jameson on the rocks.

What would be your last meal on earth?
A ribeye from Sam’s Steakhouse, my dad’s take on Kraft Mac & Cheese, my grandma’s burritos, strawberry pie and a really good bottle of pinot noir.