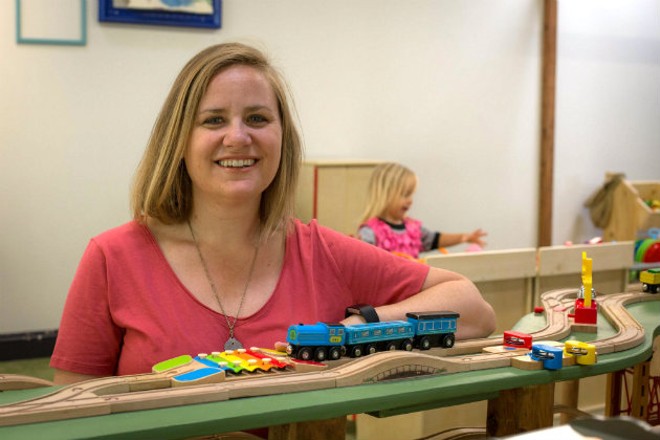 Urban Fort (1854 Russell Boulevard; 314-376-4235) has a rock-climbing wall, play kitchens, a slide, dress-up areas and toys galore — yet owner Megan King-Popp insists she opened it more for adults than children.

"This is a kids' place, but our real purpose is to give parents a break, so it's actually for adults," King-Popp explains. "Our goal is to create a comfy, relaxing atmosphere for parents, and the only way to do that is to have a place for kids to be fully engaged and safe."

King-Popp knows a thing or two about needing a break. A teacher-turned nanny and in-home daycare provider, one desperate day with a group of kids provided the inspiration for Urban Fort. She had just finished buckling in four little ones with a plan to take them to Forest Park when it started to pour rain. She drove around aimlessly, trying to find something to do in St. Louis with four children under the age of three — and came up with absolutely nothing.

As soon as she got home, she began doing research and discovered concepts known as "play cafes" springing up in other cities. She was intrigued, and when she found herself on vacation in Seattle not long after that, she got her chance to visit one. She was instantly in love.

"We love our kids, but we need a break," King-Popp says. "The generation of parents before us was all about activity after activity and a focus on making kids smarter and getting them into everything and starting them in school earlier. That was the sole focus of life, but I think we are starting to reach the point where we now realize that self-care is important and needs to be a priority."

For King-Popp, self-care doesn't only involve downtime, but also food and beverages to nourish the spirit. She and business partner Monica Croke made a point of crafting a thoughtful menu of food for adults, as well as great coffee, to give caregivers a dignified dining-with-kids option — something they both see as grossly lacking in the current food climate.

"I get that kids are picky, but we aren't, and we want to enjoy good food," says King-Popp. "I just don't understand it. If you think of restaurants that cater to adults without kids, they know they love good stuff. If you have kids, they dumb it down as if we lose our identity. We still like craft beer and good coffee."

To that end, King-Popp's background in the restaurant industry has been a huge benefit. After working her first job at Old Navy, she left retail for Mr. Goodcents and then Chili's, where she realized how much she loved the pace and dynamic environment of the restaurant industry. She worked in the food business for several years before going into teaching.

The latter career path did not necessarily excite her.

"It took me eight years to do undergrad, and I eventually just settled on education," King-Popp explains. "Looking back, I think that's why I never really had a huge passion for it."

King-Popp left the classroom and was nannying part time while her husband was in law school. Bored to tears, she was intrigued when a friend gave her a canning kit and a recipe book. She soon realized she had a knack for making her own jams, which she began selling at local farmers' markets under the name the Spiced Peach. She dreamt of opening a small cafe, akin to the London Tea Room, but with a focus on jams and preserves instead of tea.

Once the idea of Urban Fort came to her, she decided to put jam-making on hold to focus on creating a play cafe. However, King-Popp has not left the kitchen behind; with Croke, she now runs Urban Fort's food service. Though not originally part of their vision, the edible offerings took on a life of their own once they decided to offer exceptional coffee — Blueprint, to be precise. After looking into bringing in food from elsewhere, they ultimately decided to make it themselves to ensure freshness and quality.

Now instead of jams, King-Popp is making fancy grilled cheeses, caprese melts, salads and stuffed croissants, with plans to add beer, wine and even dinner service. But parents shouldn't worry; there will always be Goldfish on the menu — even if King-Popp would personally prefer to wash them down with whiskey.

King-Popp took a break from Urban Fort to share her thoughts on the St. Louis food-and-beverage scene, why her co-workers say she is a lot like salt, and the importance of a stiff drink while watching Mickey Mouse Clubhouse. Hot dog!

What is one thing people don’t know about you that you wish they did?
I make jam. Damn good jam, too. I sold it at a few different markets before opening Urban Fort. My brand name was the Spiced Peach. I planned on opening a jam-and-scone shop with the same name before Urban Fort's vision was established. I think I made the right choice.

What daily ritual is non-negotiable for you?
I require coffee first thing in the morning — otherwise you simply don't want to be near me. Hugs from my sweet kiddo, Gideon, are also required. He gives the best hugs.

If you could have any superpower, what would it be?
My superhero power would be Wonderwoman-ish. Simply the power of bad-assery!

What is the most positive thing in food, wine or cocktails that you’ve noticed in St. Louis over the past year?
Being a city girl, I have really enjoyed watching the restaurant scene grow and expand. It seems that everyone is supporting each other and collaborating to make St. Louis city an amazing place to live. The recent Grace City Wide Fair is just one awesome example of everyone coming together to create community and involvement.

What is something missing in the local food, wine or cocktail scene that you’d like to see?
I desperately wish that there was an Indian restaurant or two on South Grand. It shocks me that there isn't one.

Who is your St. Louis food crush?
Currently, my family and I cannot get enough of Lona's Lil Eats — so much so that we bought a house just a few blocks away!

Who’s the one person to watch right now in the St. Louis dining scene?
I think Travis Howard and Tim Wiggins of Retreat Gastropub are making some really incredible food and drinks. They are adding such a fun vibe to the Central West End.

Which ingredient is most representative of your personality?
My Urban Fort crew says that I would be "salt — absolutely necessary, but too much will kill you." I'm not sure if that's a compliment, but I thought it was pretty dead-on.

If you weren’t working in the restaurant business, what would you be doing?
I've worked in restaurants for fifteen-plus years. I tried to leave and be a teacher, but the fun of meeting new people and the excitement of the pace of restaurants were always calling to me. Been there, tried that ... would rather not do it again. I love working in the industry.

Name an ingredient never allowed in your restaurant.
Beets will never be allowed at Urban Fort. I know they're all the rage, but I have tried them in every capacity, and they simply taste like dirt. Nothing you do to them will ever change my mind.

What is your after-work hangout?
My house. I love being home, in my PJs, snuggling on the couch with my kid and fella, watching Mickey Mouse Clubhouse (with whiskey in hand).

What would be your last meal on earth?
Pizza Head, Lona's or some amazing Indian food. My mood would have to decide that one.