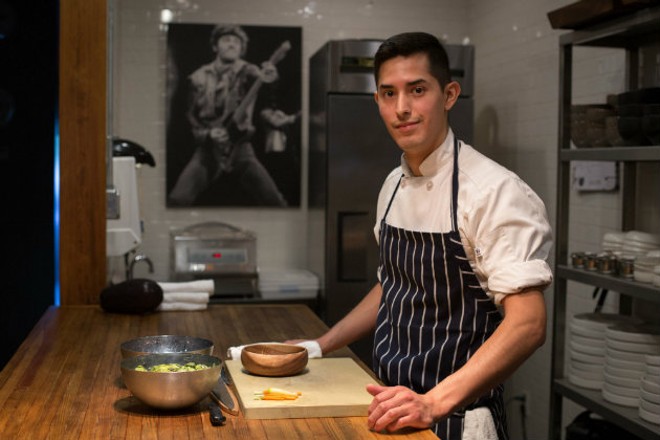 Andrew Enrique Cisneros was living the dream, playing soccer straight out of college for the St. Louis Lions, a Premier Development League team. He thought he was destined to be a professional footballer and even connected with Peruvian soccer officials to explore getting a spot on their national team.

Then a major setback dashed those dreams and set him on an entirely different course.

"I got an ankle injury that the trainer at the [soccer] club said would take six to eight months to heal," Cisneros recalls. "It wasn't broken, but it was long term, and I felt like I couldn't go back. It was very emotional at that time. I had to give up the dream."

Now that Cisneros is chef de cuisine at Mike Randolph's acclaimed tasting-menu restaurant Privado (6665 Delmar Boulevard, University City; 314-899-9221), it's hard to imagine that Cisneros dreamed of anything but being in the kitchen. However, when his hopes of playing professional soccer were dashed, he looked to his other love, cooking, as a way to get through. It's a passion that has been with him for as long as soccer, if not longer.

"I was really lucky to grow up around great food and cooks," Cisneros recalls. "My mother and grandmother are from a little province outside of Lima, Peru — they're the country people who know how to cook better than the city people. I grew up eating their Peruvian food every day, and it triggered my love of food."

Cisneros channeled that love of food at his first job, working the front of the house at a restaurant in his hometown of St. Charles as a way to make some money and keep himself out of trouble. A self-described "bad apple," he didn't like school and even considered dropping out before high school graduation. However, a counselor saw his budding passion for cooking and encouraged him to stay in school in order to leave open the option of culinary school. Though his intention was to play soccer, he agreed to stick it out and, after his injury, ended up in culinary school after all.

During his time there, Cisneros worked at Jim Edmonds' now-shuttered steakhouse Fifteen before landing a gig at the St. Louis Club under Pierre Chambrain, who'd previously been the chef at the White House. There, Cisneros developed a love for classical French cooking that would inform his style as he progressed in his career.

Cisneros did a brief stint at Elia, then returned to the St. Louis Club before taking on the executive-chef gig at the Copper Pig.  At his first management position, Cisneros admits he was challenged, though he learned as he went. Eventually, his desire to get back into fine dining got the best of him, and he took a step down when the opportunity arose to take a line-cook position under Ben Grupe at Elaia. As Cisneros explains it, the experience was perhaps the most formative of his entire career.

"Ben was training for the Bocuse d'Or and the Culinary Olympics at the time, and he shared everything he was doing with me," Cisneros says. "It was a privilege being there and being able to support him. It was one of the highlights of my career."

Though Cisneros enjoyed working at Elaia, he was intrigued when he heard that Mike Randolph was opening a high-end tasting menu concept, Privado. Competitive by nature, Cisneros saw it as an opportunity to push himself by working for another of the city's top chefs, one whose style was entirely different than anything he'd previously experienced. He made a call, the pair connected, and before he knew it he was tapped to be Privado's chef de cuisine.

"As I am looking for my own style, I think it is important to take on knowledge from others," Cisneros explains. "Mike's style is very different than mine, which is why it works."

Although he is happy with his current path, Cisneros sometimes wonders what things would be like if he hadn't gotten injured. However, he's happy that the kitchen still affords him as much of an opportunity as soccer to honor his competitive nature — if not more.

"It's why I choose to work with great chefs who have great reputations," Cisneros explains. "I cook next to them and I compete. I always want to work with someone better than me so I can challenge myself to be just as good — or even better."

Cisneros took a break from Privado's kitchen to share his thoughts on the St. Louis food-and-beverage scene, his passion for Peruvian food and the one ingredient he and Randolph agree will never be on Privado's menu.

What is one thing people don’t know about you that you wish they did?
Before I considered cooking professionally, I was playing college soccer and playing on the reserves for the St. Louis Lions.

What daily ritual is non-negotiable for you?
Coffee, and coffee from a great local company like Blueprint Coffee.

If you could have any superpower, what would it be?
Reading our guests’ minds to receive honest feedback.

What is the most positive thing in food, wine or cocktails that you’ve noticed in St. Louis over the past year?
The relationship with farmers and chefs is much more collaborative than guests may realize. We have a very close relationship with Anne [Lehman] at Dirty Girl Farms, and I think it’s amazing what she’s able to grow for both the chef and bartender community. For example, I was really looking for black mint from Peru, and I got ahold of some seeds from the chef at Mango. Now she’s able to germinate them for us, and she mentioned how other chefs have been looking for it as well. We’re all helping each other! It works the other way around as well where the farmers inspire us. For example, Bohlen Farms just harvested all of this amazing baby corn, and we knew immediately that we could do something cool with that at Privado, so we bought a bunch of it to do a course of mini elotes.

What is something missing in the local food, wine or cocktail scene that you’d like to see?
I’m Peruvian, so I’d love to see a Peruvian restaurant that focuses on raw fish (a cevichería) or a pollería (our kind of chicken shack that just serves pollo a la brasa and french fries). We did a pop-up of a pollería at Privado, and everyone loved it!

Who is your St. Louis food crush?
Qui Tran of Nudo House and Mai Lee. I’ve known him even before I started working professionally in this industry, and I have always admired him. I used to help him with private events, and he’s hospitable from the front of the house to the back of the house.

Who’s the one person to watch right now in the St. Louis dining scene?
José Venta of Sidney Street Cafe … that man is talented. We’ve had the privilege of doing a few collaboration dinners with chef Randolph and chef Nashan, so we’ve had a chance to spend some time together. I really appreciate his cooking.

Which ingredient is most representative of your personality?
An old-world wine like a Bordeaux. I’d like to think of myself as an old soul; I’m always very calm, organized and quiet in the kitchen. And even though cooking with ingredients like Bordeaux is kind of old school, I’m classically French-trained, and these fundamentals of cooking still inspire me today.

If you weren’t working in the restaurant business, what would you be doing?
I would be playing professional soccer, or at least trying to!

Name an ingredient never allowed in your restaurant.
Truffle oil and okra. It’s something that chef Randolph and I share. I just can’t do the texture.

What’s your food or beverage guilty pleasure?
A Budweiser and a good burger.

What would be your last meal on earth?
Pierre Koffmann’s pigs trotter and potato puree.