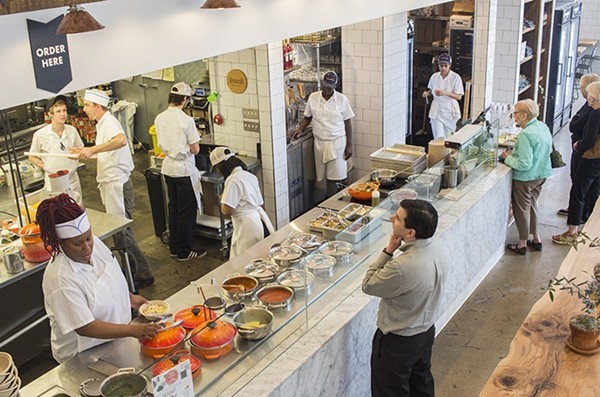 One week after an attempt at rebranding, Gerard Craft's fast-casual Porano Pasta says it will close its doors for good on July 31.

The counter-service spot in the MX Building downtown had announced just last week that it would become Porano by Pastaria, modifying its menu and format to take a cue from Craft's wildly successful eatery in Clayton. But in an email to customers this afternoon, Craft said he was instead closing Porano altogether — and reverting to the restaurant's original menu for its final week of service.

Craft had just won a James Beard Award at the time of Porano's opening, and he had big goals for what was on its face a low-key, counter-service eatery. He originally envisioned Porano Pasta as a way to ride the fast-casual wave — and, he hoped, transform it with fresh ingredients and eco-friendly accoutrements.

To that end, Porano combined sleek design with assembly-line preparation, locally sourced food with a busy lunch crowd. You could get a negroni slushy, but most of the people who ate there opted for bowls piled with build-your-own pasta.

To the critics, it was a success. The RFT's Cheryl Baehr called it "the fast-casual restaurant we've been waiting for," adding, "Porano is a testing ground for Craft's vision of the future of fast food, which is ironic considering the restaurant's slow food inspiration."

Still, it lasted just two and a half years, and in Craft's parting email, he referenced "lost" business from convention goers. "We love downtown and hope they can find a way to bring back all of the amazing convention business we lost this year," he wrote.

Here's the complete email Craft sent to customers this afternoon:

It is with a heavy heart that I share the news that July 31st will be Porano's last day of service.

Our ultimate goal was to provide a service and product that was compelling, quick, affordable, and delicious, but despite our best efforts, including a last attempt at revitalization, we recognize that it is time to move on, and focus our energies toward our other 5 amazing restaurants.

I can't stress enough how grateful we are for your past patronage and support, so as a final goodbye, a proper send-off, and a thank you we will be bringing back the original menu beginning Tuesday the 26th until we close. We love downtown and hope they can find a way to bring back all of the amazing convention business we lost this year. Another time, another place, who knows - we never say never.

A special thank you to all of the people who have helped make this a special place along the way. Michael Petres, Kate Woolverton, Alejandro Molina, Matt Macek, and all employees past and present I can’t thank you enough for the time and dedication you have brought to our little fast-casual beauty. To our loyal customers, thank you. We will miss you dearly.

Craft won the Best Chef: Midwest award from the James Beard Foundation for Niche, which he soon after transformed into Sardella. His other restaurants include Brasserie, Taste Bar and Pastaria. He plans to open Cinder House at the Four Seasons Hotel later this summer.