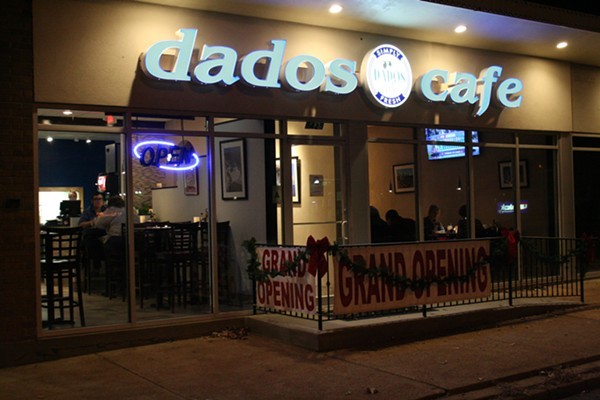 A Greek restaurant in St. Louis Hills has been hit with three separate lawsuits from former employees, alleging sexual harassment and retaliation.

The suits, filed in St. Louis circuit court last October against Dados Cafe (5425 Hampton Avenue, 314-858-5800), detail a series of crude and offensive comments, as well as unwanted touching, that the former staffers say they were subjected to by kitchen staff.

All three former employees — all women, all represented by the same attorney — say that kitchen workers shaped raw meat to look like penises, showed them sexually explicit photos and videos and talked about how sexy their bodies were, according to their complaints. In one case, a female staffer says a cook cornered her by the pizza station and tried to grab her genitals.

Yet when they complained about the behavior, their lawsuits say, the restaurant's chef/manager Nick Avouris did nothing to stop it. One woman alleges in her suit that Avouris told her, "Looks like you can suck a good dick." When she once looked flushed, he allegedly told her, "You must [have] got a good fuck." He also supposedly asked her, according to the lawsuit, if she "liked to be fucked good."

In the lawsuits, the women say that their complaints about harassment ultimately led to their termination. All three say they were fired in October 2016.

Yet through his attorney, Avouris denies that as well. Attorney Rich McGee says the women were not fired for complaining — one was fired for performance, and the other two quit. (And one, he says, later attempted to come back.)

Beyond that, he says the restaurant's employee handbook clearly outlines a policy for anyone seeking to complain about harassment. The restaurant's owner Gus Botonis is frequently on site, McGee says. The staffers could have complained to him at any point. (There is no suggestion in the lawsuits that they did so.)

"If [Avouris] was the harasser, they had many opportunities to talk to Gus," McGee says. "How do we know if they don't say anything?"

The women's claims recently inspired a fourth lawsuit — this one filed in federal court by the restaurant's insurance company, State Farm Fire & Casualty Co., seeking a declaration that its policy does not cover the harassment allegations.

Dados Cafe opened in the fall of 2015, offering both American and Greek fare. It's earned positive reviews, including one from the RFT's Cheryl Baehr, who wrote that she found herself "dazzled" by Avouris' take on Greek classics.

Editor's note: We updated this post after publication to include comments from Rich McGee, who is representing Avouris in the litigation. We also corrected the story on one point. While the former employees' lawsuits claimed that Avouris is a chef/owner, McGee says he is rather the chef/manager. We regret the error.