Howl at the Moon Is Closing at Ballpark Village 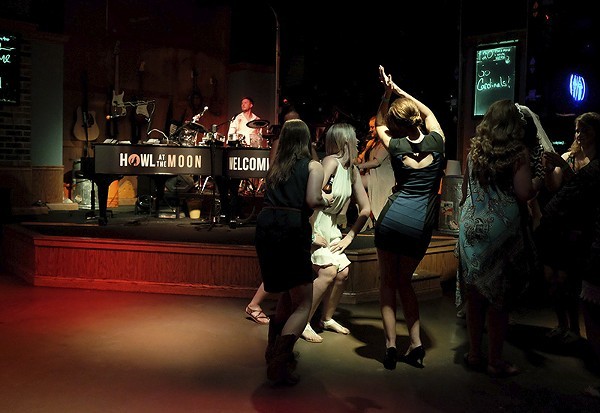 Howl at the Moon (601 Clark Avenue, 314-736-4695), an anchor at Ballpark Village since the Busch Stadium-adjacent development first opened in March 2014, will be closing this weekend.

Howl at the Moon confirmed the closure in a statement released through the project's developer after getting inquiries from the Riverfront Times. The bar's last night is Saturday.

"The St. Louis location of Howl at the Moon closed due to our lease agreement ending," said Jimmy Bernstein, founder and CEO. "We have loved our experience at Ballpark Village and St. Louis and hope to return one day."

The dueling piano bar concept had been a popular spot for bachelorette parties and other events. But Cordish Companies, the Baltimore-based developer that is partnered with the St. Louis Cardinals on the Ballpark Village, says it has a new tenant to fill the space — Shark Bar, an outpost of the one that opened in Kansas City's Power & Light district in 2008.

“We are thrilled to announce this new anchor tenant for the first phase of Ballpark Village,” said Bill DeWitt III, President of the St. Louis Cardinals in a statement. “Shark Bar has shown phenomenal success in Kansas City and we are pleased that its second location will be opening within Ballpark Village. This is an exciting time for Shark Bar to be joining the neighborhood as construction of our second phase continues to progress.”

The second phase of Ballpark Village is currently under construction next to Busch Stadium. It's slated to add another 700,000 square feet — seven times the first phase. This phase will include office space, 300 residential units and a $65 million Live! by Loews hotel.

Earlier this year, a 32-year-old St. Louis resident was charged with murder after shooting another man he'd exchanged words with at a private party at Ballpark Village.