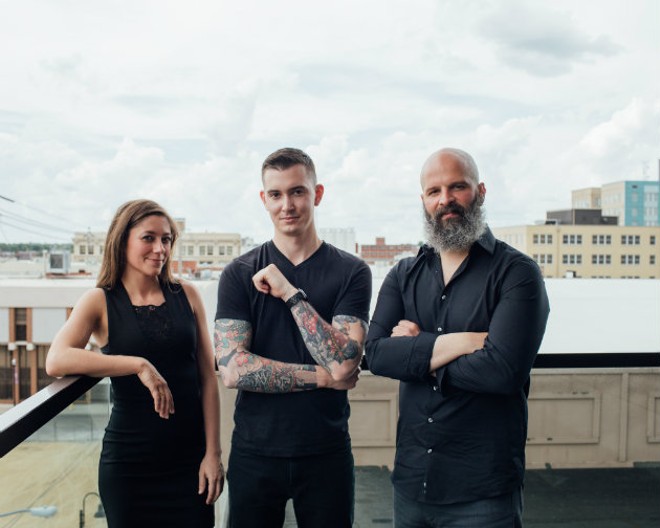 The trailer for Bret Hoy's new short documentary film, "Lingua Francas," opens with chef Daniel Ernce on the Copenhagen metro, headed to his job at the acclaimed restaurant 108. As the doors of the train open, scenes of the European capital come into view — a seaside metropolis that couldn't be farther from Ernce's pastoral hometown of Springfield, Missouri, and the pop-up series, Progress (www.progresspopups.com), he began just one year prior to leaving for the Danish city.

Ernce, however, would contest the presumption that there is something inherently different between Springfield and Copenhagen, at least in terms of how people want to eat. That premise — the universality of the desire for thoughtful, quality food — is not just the subject of Hoy's documentary, but also the spirit that animates Progress, which is catching serious buzz for its fearlessness in preparing haute cuisine for a middle-American audience.

For Ernce, though, the key to his success is less fearlessness than it is offering Springfield a refined taste of food that is unique to their part of the world — something he has noticed an increasing demand for over the years.

"There has been this big shift in the food scene here in the past five years," Ernce explains. "Back then, I couldn't tell you about what it would look like today, but here we are with people interested in delving deeper and realizing that food is so much more than something you put in your mouth. People are much more open-minded and less averse to trying new things."

Ernce grew up in the kitchen (his mother loved to cook) and gained an awareness of food at a young age. Then, at eighteen, he moved to Australia for ten months and lived in a home with ten other people, none of whom could cook. Ernce found himself making dinners for the group and realized that this was something he wanted to pursue.

In college, he studied professional writing, with dreams of ghostwriting cookbooks. But between his junior and senior year, he realized that he did not want to be a ghostwriter; he wanted to write cookbooks of his own. He added a culinary minor to his coursework and began working for a Springfield innovation firm, Food IQ.

After being pushed into attending culinary school, Ernce realized he wanted to do his own thing. One night he got to talking with a bartender who suggested they do a pop-up together. Unbeknownst to them, the bar's owner had been having an almost identical conversation with the chef. At that moment, Progress was born.

One year into the pop-up, Ernce had the opportunity to pursue an internship at 108, the Michelin-starred restaurant that was the casual spinoff of chef Rene Redzepi's temple to Nordic cuisine, Noma. The experience would shape Ernce and Progress, though ultimately his Springfield roots proved just as critical. They remain the soul of the concept, no matter how high-end or innovative it may appear.

"I think the reason we are who we are has a lot to do with figuring out our own identity and tapping into our time and place and who we are," Ernce explains. "It's filtering what is available locally through your own voice as a chef, whether that's humble country food or exquisite plant-driven food or modern American."

As Ernce sees it, the interest in what he and his partners are doing is part of a larger cultural phenomenon.

"I feel like the Midwest, particularly the Ozarks, is poised for an evolution in the dining world, because if you look at pop culture over the last few years, it is starting to focus on the region," Ernce explains. "It started with Winter's Bone, then Gillian Flynn's books like Gone Girl and now even the series Ozark. It's been interesting seeing pop culture narrow its view on this region while at the same time, food culture is doing the same. We see it as a stage for us to step up to."

For now, that stage is Hoy's documentary, which is part of this year's St. Louis Filmmakers Showcase. The annual Cinema St. Louis event runs July 13 through July 22 at Washington University; "Lingua Francas" is part of the "documentary shorts" program on July 21 at 2:30 p.m.

Though Ernce didn't seek out Hoy — or, for that matter, any of the recognition Progress has received — the chef sees "Lingua Francas" as capturing the story he and his team are trying to tell, even if he didn't know what that was when filming began. Now, though, it's quite clear.

"We're trying to contribute something meaningful to the dining scene. Not forcing high-end dining culture onto Springfield, but to show people there is more to eat besides meat and potatoes and steaks the size of your head," Ernce says. "We're an outlet that shows people that there is more. We want to see change, but that won't happen on its own."