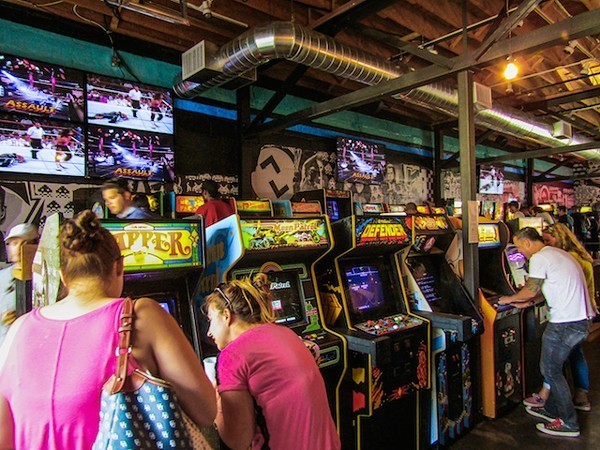 Almost a full year after Up-Down Arcade Bar won a liquor license from St. Louis City Hall, it finally won permission from the court to use it.

The decision, issued Friday by St. Louis Circuit Court Judge Joan L. Moriarty, clears the way for the Iowa-based chain to open at long last inside the former home of Herbie's Vintage 72 (405 N. Euclid Avenue). A small group of neighbors had opposed the bar's opening — and, after losing at City Hall, sued to make its case the city's Excise Division had erred in granting the license.

Moriarty ruled for the city and against neighbors Elizabeth Heller and Hannah Roth.

"The Court finds that the record compiled by the Excise Division is adequate and complete," Moriarty wrote in a three-page ruling. "The Court further finds that Petitioners have failed to demonstrate that the decision was not supported by competent and substantial evidence upon the whole record; that it was arbitrary, capricious, or unreasonable; or that Excise Division abused its discretion."

Excise's hearing officer had issued his preliminary approval last May after a contentious hearing that lasted for several hours. He followed up with a thirteen-page written decision fleshing out his reasoning in July.

For most bars, that's enough to start pouring drinks. But thanks to the neighbors' challenge, Up-Down has been stuck in legal limbo, its future home just south of McPherson empty and dark even as at least two other arcade bars have opened their doors within city limits.

Co-owner Josh Ivey told the RFT last May that he had stopped work on rehabbing the building after it became clear that the neighbors' unhappiness could be enough to derail the project. Reached Saturday, he said it was too soon to get a sense of when the bar might be opening: "It's hard to have an accurate timeline right now as we really couldn't put anyone on schedule until we got an answer." Still, Ivey said he is "excited to get this project going again after the delay."

The battle had gotten heated — and, in some cases, personal, with the faction of unhappy neighbors and the building's longtime owner, Pete Rothschild, in vehement disagreement over the best use of the building. The neighbors opposed Up-Down because it was a bar; Rothschild said the space was simply too big to work as the restaurant they yearned for. Things got heated.

But to the victors go magnanimity. Rothschild declined his chance to crow about the ruling, and the lawyer who represented him and Up-Down, Al Watkins, kept his remarks uncharacteristically brief.

"Time to tip a hat and a glass to an organization seeking to move into St. Louis," he said Friday.