Blue Box Pizza Is Now Open in the Loop, Offering a Little Bit of Everything

It's probably wise to get one thing out of the way about Blue Box Pizza (3694 Delmar Boulevard, University City; 314-696-2028), the new fast-casual eatery in the Loop: Its pizza boxes are not blue.

"Everybody asks us that question!" says co-owner Ben Deloya, laughing. "That's the plan. We will have blue boxes." They just don't have them yet.

Indeed, for now, Blue Box Pizza is a work in progress. The restaurant opened June 9 in the space that previously held Doughocracy, but the grand opening is still at least four weeks away. The owners are waiting for the sign they've ordered for the front of the building, as well as a liquor license (they hope to eventually offer a full bar). And they're frank about the fact they're still working through some kinks.

Still, Deloya and his co-owners — which include parents Arlene Galve and Angel Deloya, plus his 22-year-old brother Erik — have the kitchen revved up and serving its full menu. The remaining details are just that: details.

If the space's previous tenant applied the Chipotle model to pizza, Blue Box Pizza raises the stakes far beyond that. Like Chipotle, you order at the counter and watch your food being prepared before you. But unlike Doughocracy, it's not just pizza on offer here — you can customize a twelve-inch pie, sure, but you can also build-your-own sandwich, wrap, burrito, or salad. For each, you choose from a variety of dairy (everything from "pizza blend" to Parmesan), proteins, greens (which include, oddly, everything from corn to pickles), sauces and dressings.

If that sounds too complicated, the owners have dreamed up combos in each category. Those run from basic (the "Gobbler" sandwich includes turkey, provolone, tomato, lettuce, mayo and onion) to over-the-top ("the Termeatnator" pizza includes ham, chicken, carnitas, pepperoni and bacon — and that's just the protein). Some flavors, like the pulled pork achiote and the mole-style cacao sauce, give real international flavor. "We wanted to show people you can enjoy pizza a different way," Galve says.

Prices are reasonable, with a twelve-inch pie costing $10 for a build-your-own or $12 to $16 for a speciality. Salads and sandwiches are $6 to $10, depending on size and toppings.

And that's not all. In addition to the boozy slushies the owners hope to offer once they get that liquor license, the kitchen also offers nachos or quesadillas, braided hotdogs and even delicate pastries, including macarons and petits fours.

The reason for the pastries? The family also owns (with Galve's brother) Pastries of Denmark, the cafe in Creve Coeur. But this, their first restaurant on their own, is fulfilling a longtime dream.

Galve's background is in education. After following her sister from Spain to Missouri decades ago, she earned a Master's degree and then a doctorate. Her son Ben later followed in her footsteps, working as a teacher. But all the while, they wanted to open a restaurant. Says Galve, "We have been talking a long time about this."

They saw pizza as an ideal canvas for creativity and unique flavor combinations — and the Loop as an ideal location.

"It's so diverse," Ben Deloya says. "We figured we'd get people from different backgrounds, and they'd be likely to enjoy our pizza." When the Doughocracy spot become available, they jumped at its turn-key aspect. "The set-up was already there," Deloya says.

Now they're just waiting on a few missing pieces. But no reason to let the lack of sign, or even blue boxes, stop you from visiting. Come on by; the kitchen is open. 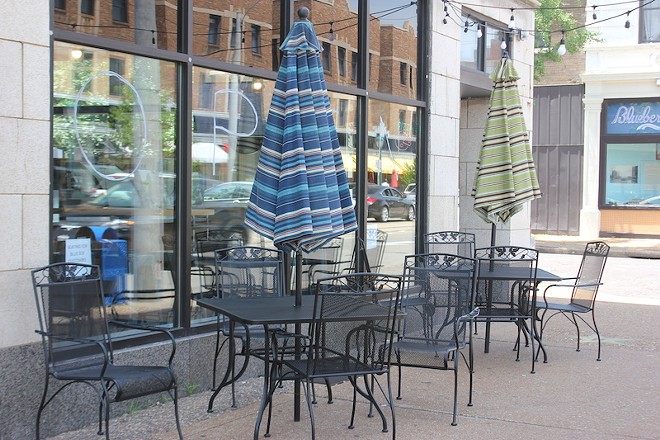