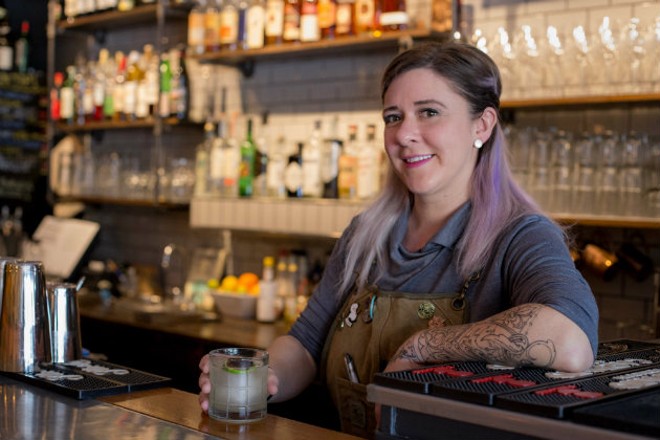 When she was a teenager, Naomi Roquet had a clear idea of her life's calling — one that was about as far removed from tending bar as you can get.

"I grew up in a Christian home and my dad was the youth pastor at our church," Roquet recalls. "I thought I should be involved, and I always loved music, so I thought I would help out with worship. I started in middle school, and by the time I got to high school, I was co-leader."

Roquet did not see leading worship as just a hobby; she thought it was what she wanted to do with her life — or at least that is what she told herself after graduating high school. Although school was never really her thing, she felt an obligation to go to college and set her sights on becoming a traveling worship leader, encouraging young church members with artistic talents.

However, she hit a rough patch, and it quickly became apparent that she was the one who was going to need the encouragement. "I just got angry and lost, and it was like I didn't know what I was supposed to do," Roquet explains. "I just gave up on everything and dropped out."

Around that time, Roquet began working for Starbucks, and to her surprise, she enjoyed it. She worked for the company for more than five years before getting into the retail field, working at Urban Outfitters and then Target.

While working for Target, Roquet got a second job serving at the Scottish Arms. It was love at first sight, and as she got to know some of the top bartenders around town, she got an inkling that she just might be onto something. She quit serving and moved out to St. Charles, where she got her first bartending gig at Prasino. She was hooked.

"I didn't think this would be a passion, but when I started doing it and creating and seeing how I could make people happy one drink at a time, it started to change me," Roquet recalls. "I'm equally left- and right-brained — creative and passionate, but I still need things to be a certain way and organized. I saw that you have to be both of those for bartending, and I realized, 'OK, this job is actually perfect for me.'"

After Prasino, Roquet landed a job working alongside Ben Bauer, one of the city's top bartenders, at the Libertine. She did not allow herself to be intimidated, instead seeing it as a challenge to get better.

"Ben already had a reputation, so it was motivation for me," says Roquet. "I didn't want people coming in and saying that they would wait for him to make their drink. I wanted them to want me to make it. It was a fun challenge."

Roquet honed her craft at the Libertine, then Scarlett's Wine Bar and Juniper before landing the bartending gig of a lifetime at the powerhouse Reeds American Table (7322 Manchester Road, Maplewood; 314-899-9821). She was shocked when sommeliers Alisha Blackwell-Calvert and Andrey Ivanov sat her down and told her she was their top choice.

"I kept pinching myself," Roquet recalls. "Alisha and Andrey were talking about what my job would be and the entire time, I was thinking that I could not believe it."

These days, she may be living the dream, but she hasn't forgotten how she got here. Every day, she draws upon the experiences of her time at other bars, Starbucks, Target, and even the Pizza Hut she managed, where she learned the importance of inventory and putting together a team.

"The way I see it, anything you have ever done in life is training you for what you are doing now," Roquet says.

She even still finds inspiration in music, even though it's no longer her chosen path — just don't expect her to be singing behind the bar.

Roquet took a break from the bar to share her thoughts on gnomes, the joy of sleeping in and the one thing you will never see behind her bar.

What is one thing people don’t know about you that you wish they did?
I have an obsession with gnomes. I try to keep it to a minimum, but I get super excited when I see a cool gnome!

What daily ritual is non-negotiable for you?
Sleeping in to the very last minute. Sleeping is my favorite!

If you could have any superpower, what would it be?
To fly. There are some many places I would love to visit.

What is the most positive trend in food, beer, wine or cocktails that you’ve noticed in St. Louis over the past year?
More people are slowly getting in to rum. Rum is one of the most underrated spirits out there. I think people have a bad taste for it because they have only had flavored rum or cheap rum for so long. It's kind of like how most people react when they hear "riesling" — they automatically think it is going to be sweet because that is all they have known, but not all rieslings are sweet.

What is one thing missing or that you’d like to see in the local food and beverage scene?
For it to get better recognition for how diverse and amazing it is. We might not be Chicago or New York or any other major city, but we have the talent to be known the way most major cities are.

Who is your St. Louis food or drink crush?
I don't have one single crush. From that ones who inspired me (Matt Seiter, Matt Obermark, Joel Clark), to the ones that are just crushing it (Nick Digiovanni, Jeffrey Moll, Ben Bauer, to name some), there are so many influences for me and reasons to try and strive harder and do better at what I do.

Who’s the one person to watch right now in the St. Louis food and beverage scene?
Kira Webster. Even though she is no longer bartending and is now a general manager at 801 Fish, it has been so fun to watch her kill it behind the bar and at competitions. I know that bartending and creating will never leave her blood. She is too talented!

Which ingredient is most representative of your personality?
Tequila reposado. Tequila is delicious, but not for everyone. It makes you happy, but can also make you crazy. And, as it ages, it gets better.

If someone asked you to describe the current state of St. Louis’ food and beverage climate, what would you say?
St. Louis has come a long way. There are so many great places, new and old, that make it such a great, diverse city where you can find anything you are craving.

If you were not tending bar, what would you be doing?
I have no idea!

Name an ingredient never allowed behind your bar?
I drink a lot of vodka and have an appreciation for it, but I will not carry a flavored vodka that I can make.

What is your after-work hangout?
The Scottish Arms, the Crow's Nest, Small Change.

What would be your last meal on earth.
Reeds' agnolotti, crab Rangoon, toasted ravioli and my mom's key lime cheesecake.