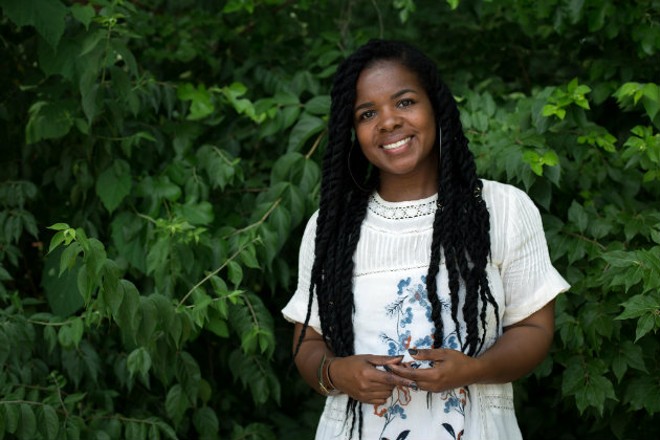 Shannon Thompson didn't realize it at the time, but her childhood was much different than the other kids in her neighborhood, at least in terms of what she was eating.

"I grew up in a household where we ate really healthy — we didn't buy sugared cereals, we ate zucchini and squash and fresh spaghetti sauce," Thompson recalls. "We lived in Walnut Park near Jennings, not the best neighborhood, yet we ate organic. Here we were eating duck with homemade noodles. It didn't dawn on me how good I had it as a kid until I got into this lifestyle as an adult."

That lifestyle, one dedicated to healthful living and sustainability, is what's led Thompson to launch her catering business, .iNDIE4 Catering (www.eatsbyindie.com), and her soon-to-open restaurant, Indie Eatery. The enterprises have been a long time coming for Thompson, who has dreamed for several years of having her own food business and has been working off and on to make that happen, in some capacity, since 2009.

That year was life-changing for Thompson. At the time, she was enlisted in the Air Force and stationed in the Middle East, where her lack of regular access to to goods such as toothpaste and deodorant prompted her to begin making her own. As she traveled around the region, she also noticed the lack of processed foods and the availability of fresh juices and began thinking more and more about what she was putting into her body. After research and reflection, she decided to live as naturally as possible.

Around that time, Thompson also began cooking for herself and her husband. She realized she had both a passion and a talent for it, and when she and her husband came back to the United States, they thought they would open a restaurant. In preparation for that, they went back to the Middle East for three more years, dividing their time between working in the Air Force and traveling around the area to learn as much as they could about food.

Thompson and her husband felt like they were ready to realize their restaurant dreams when they got back to the U.S., but then the Great Recession hit and, unable to find work, they used up their savings just to support themselves. Though it seemed antithetical to her life's philosophy, Thompson had to pay the bills. She got a job working at Monsanto.

Unhappy with her job, Thompson began poking around on the internet and found information on a company called BeLeaf, which had just been granted a license to begin providing medical cannabis to epilepsy patients. She reached out to the company to ask if she could teach yoga to the patients, but ended up being offered a position as a community educator and patient advocate.

"I had to make a living, but Monsanto was pulling on me," Thompson says. "So I left to follow my passion. It was a drop in salary and benefits, but I felt like it was the right thing to do."

Thompson worked for BeLeaf for a year before their funding decreased and they had to let her go. Again, she found herself in a position where she couldn't find a full-time job to support her family, but this time, she decided to take matters into her own hands. Armed with a small menu and a handful of tried-and-true recipes, she approached a local apartment building about catering their grand opening. To her surprise, they let her do it.

At the grand opening, she made connections that would lead to additional catering work. Before she knew it, she was booking jobs for such influential events as a Democratic Party fundraiser, the St. Charles prosecuting attorney and Arch Grants. She had no Facebook page, and no website, yet the business came rolling in. She knew right then that she was on the right path.

"Before, we were trying to force stuff and it wasn't working," Thompson says. "This time, I was just asking the universe to put it in front of me, and it wasn't a fight. We're getting sign after sign that we are moving in the right direction."

About a month ago, Thompson took over a small commercial kitchen off Mexico Road in St. Peters that will serve as a home to her catering business and a storefront for a forthcoming restaurant, Indie Eatery. There, she will serve dishes based on recipes that she has been tweaking over the years — buttermilk pancakes, French toast with caramelized bourbon cream sauce, and a Liege-style waffle. She hopes to open later this month, though she can barely contain her excitement in the meantime.

"It's been a labor of love. For so long we've been thinking and refining and are finally putting our vision to work," Thompson says. "I've put so much love into it that it's bursting out — I could pop!"

Thompson took a break from the kitchen to share her thoughts on the St. Louis restaurant scene, why she'd like to see more interesting restaurants in the suburbs, and why it's OK for life to give you lemons.

What is one thing people don’t know about you that you wish they did?
This is a nice tricky question – I’m actually really happy about being inconspicuous and low-key. People may not know that I’m a true introvert. My private life is everything to me. It’s hard work trying to put myself out there.

What daily ritual is non-negotiable for you?
Meditating and strength training. I can’t go a day without either. They keep me focused and provide me the best opportunity to really organize the things going on in my brain and think things through a bit better.

If you could have any superpower, what would it be?
Michonne, from The Walking Dead, is the epitome of a superpower – right? LOL! No, seriously, time travel would be a spectacular superpower to have!

What is the most positive thing in food, wine or cocktails that you’ve noticed in St. Louis over the past year?
I think the food scene in St. Louis is bending the corner on creativity. People are really taking bold chances with their menus. I see a lot of plates being orchestrated by the heart. There are a lot of thoughtful dishes popping up in a number of spaces.

What is something missing in the local food, wine or cocktail scene that you’d like to see?
I don’t think there is too much missing in any of those scenes. I think that the spaces and options are just concentrated mainly in the city of St. Louis. I’d like to see more of that creativity make its way to the 'burbs.

Who is your St. Louis food crush?
I will always and forever crush on Juniper! The ambiance of the space, the simplicity of the menu, unique combinations of small plates with the perfect balance and intensity of the ingredients.

Who’s the one person to watch right now in the St. Louis dining scene?
I’d say David Kirkland, the owner and chef of Turn. I love the vibe, and the dishes feel super authentic. It's like he’s not afraid to take the chance to put what’s in his head on a plate — a fabulous-looking plate!

Which ingredient is most representative of your personality?
That’s easy – lemon, the zest and the juice. It’s versatile, and it’s amazing in both savory and sweet dishes. It can take any recipe to the next level, but it’s just a simple lemon. You can’t help but respect the purity of it.

If you weren’t working in the restaurant business, what would you be doing?
Teaching nutrition education to kids and adults in underserved communities (what I do now) and yoga.

Name an ingredient never allowed in your restaurant.
Seafood/shellfish — only because I’m allergic.

What is your after-work hangout?
I don’t know if my friends would appreciate me spilling the beans. I think I’m supposed to keep that a secret! My favorite spot is Louie’s Wine Dive in Clayton.

What’s your food or beverage guilty pleasure?
An organic iced matcha green tea, daily, for sure. On the food tip, it's cacio e pepe.

What would be your last meal on earth?
Without hesitation, it would be my favorite from Kemoll’s! Pollo All’agro Dolce (which is no longer on the menu), house salad with no capers or garbanzo beans, cheese bread and the penne pasta in a creamy basil sun-dried-tomato alfredo sauce.

We are always hungry for tips and feedback Email the author at cheryl.baehr@riverfronttimes.com.