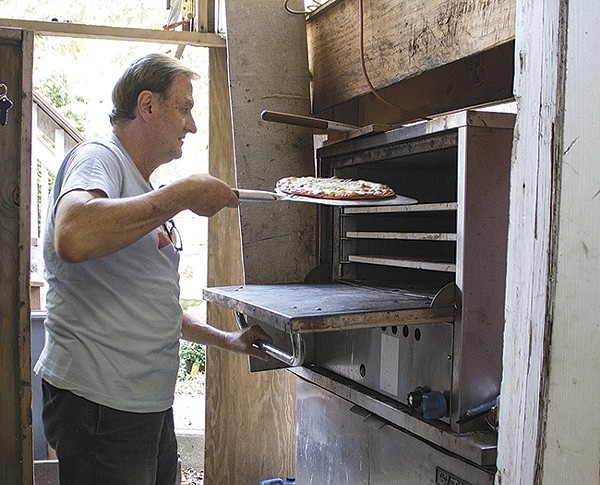 For the last ten years, Kevin McGinn has built a mercurial reputation around his hole-in-the-wall pizza shop, Kevin's Place (2111 Cherokee; 314-353-1400), which has become an institution on the Antique's Row side of Cherokee Street.

But recently, McGinn put up a sign in the window: "For sale."

"I've never been love with the whole situation," says McGinn.

That's the understatement of the year. As the RFT reported in a wild-ride November 2017 cover story, McGinn, then 60, has long had a love/hate relationship with his customers and chosen occupation. After more than a decade in business, the south-city native still runs the shop as a one-employee operation — it's just him, a pizza oven in a tiny kitchen and an endless succession of orders and deliveries.

That's not to say business has been bad.

"I'm just trying to compete with everybody else," says McGinn. "We do pretty good job overall, and things are really starting to come together."

Indeed, McGinn has been preparing to open a second location, on the corner of Mardel Avenue and Hereford Street in Northhampton. That location, too, is up for sale, says McGinn. Even as he's readying the new store, he's decided to start looking for exit strategy, to leave the pizza business for good.

For McGinn's many fans, the good news is that Kevin's Place remains open for the foreseeable future. Although he's now looking for prospective buyers, McGinn says he's still going to doing what he's done for the past decade, making St. Louis-style pizza and putting customers in their place, bluntly if necessary.

There's only so much one guy can do.

"I'm not the youngest guy in the world," he says over the phone, chuckling. "It's time to do something different."
Follow Danny Wicentowski on Twitter at @D_Towski. E-mail the author at Danny.Wicentowski@RiverfrontTimes.com