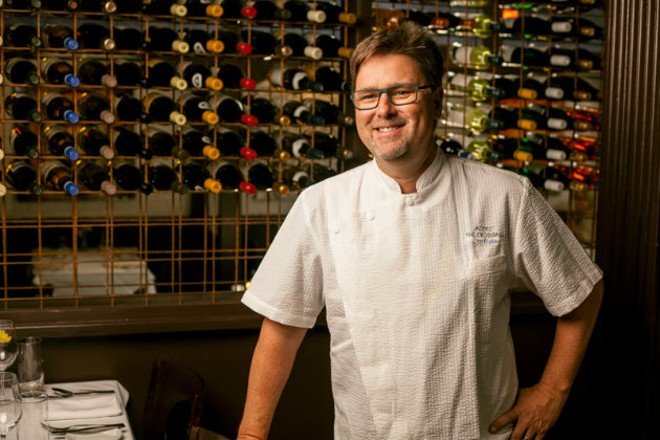 Ask Jim Fiala why he got into cooking, and he doesn't hesitate with the answer: burnt steaks.

"My family would travel, and my dad would ask what was the best restaurant in town. Sometimes, that was a steakhouse, and they would burn the meat on one side," recalls Fiala, whose longtime restaurant the Crossing (7823 Forsyth Boulevard, Clayton; 314-721-7375) is widely regarded as one of the county's best. "I hated it. It was toxic to me, but when we would eat steaks at home, sometimes my dad would get to talking to someone while he was cooking and do the same thing. Finally, I said, 'Dad, let me cook the steaks.'"

A distracted cook he may have been, but Fiala's father knew good food. The self-made businessman made it a point to take his family out on a regular basis, instilling in them a love of food and hospitality that influenced Fiala from an early age. Their meals would involve much more than eating; Fiala and his father would spend their time around the table deconstructing every aspect of the experience, from the service to the food to the atmosphere.

Though food got under his skin, Fiala did not immediately pursue it professionally. Instead, he enrolled in college in Dallas where he earned a finance degree, thinking he would open his own business one day but not knowing what exactly what that would look like.

After graduating, however, he found himself back in St. Louis, making bar food at the iconic Village Bar in Des Peres. Little did he know, that experience would set him up for his future career.

"I was cooking burgers and ham and cheese sandwiches, but I would ask myself, "How do I do this right," Fiala explains. "It was about grilling the onions and getting them done perfectly, then having that perfect balance of onions and mustard and cheese and ham and rye bread. It was about slow-grilling it so that it got perfectly melted or cooking the best burger I could. I put love into cooking those burgers and made them the best I knew how to at the time."

Fiala traveled to and from Dallas during that time in his life, interviewing for jobs in finance. As he sat in interviews, all suited up, he recalls staring at the clock and wondering how soon he could get out of the room. He knew a job behind a desk wasn't a good fit, but he didn't know what the right one was.

After a brief gig promoting wrestling in Dallas, Fiala got a job on a cruise line as a deck hand. He was bored and unchallenged, so he asked if they would train him for a job in the galley. It was his "aha" moment.

"I was making avocado dressing and bacon dressing and learning how to cut cantaloupe and make a soup from raw ingredients," Fiala recalls. "I learned there was a process of putting flavors together and had chefs who would teach me how to draw them out. I thought, 'Oh my god, I love this and can't wait to get up in the morning to do it again.'"

Fiala worked on the cruise ship for about a year before returning to St. Louis and getting jobs in some of the kitchens around town. After that, he moved to San Francisco for culinary school. There, one of his chef instructors gave him some advice that has stuck with him and set him on a course that would take him to some of the best restaurants in the country.

Fiala applied to the top five restaurants in Chicago before landing in the kitchen of famed chef Paul Bartolotta of Spiaggia working for $6.50 an hour. He worked there for a few years before leaving the Midwest for the legendary Daniel Boulud of Restaurant Daniel in New York City. It was a high-pressure environment, and Fiala would wake up in the morning grinding his teeth and worrying about how to not make the same mistake twice. And he loved it.

After a few years working in New York, Fiala left the mainland to work for a resort on Puerto Rico, then returned to his native St. Louis with the dream of opening his own restaurant. In 1998, his parents cosigned on a line of credit to allow him to open the Crossing. By that July, he had already paid off his loan.

He admits it wasn't always smooth sailing. In the midst of positive reception, there were weeks he didn't know if he would make payroll. However, twenty years later and still going strong — and with the successful Acero (7266 Manchester Road, Maplewood; 314-644-1790) under his belt as well — he is confident that there is nothing else he would rather be doing.

"I'm very content taking care of our guests," Fiala says. "When they come in, I want to give them the best experience they can have for their money. We build one guest at a time and earn their trust so they will come back but making them happy. That's how we've built it."

Fiala took a break from the kitchen to share his thoughts on the St. Louis food and beverage scene, who he has his eye on in the local restaurant community and why it doesn't matter what he eats for his last meal, as long as he is surrounded by the people who matter most.

What is one thing people don’t know about you that you wish they did?
My second job out of college was promoting professional wrestling; first job was cooking burgers at the Village Bar in Des Peres while I searched for the second.

What daily ritual is non-negotiable for you?
My morning coffee with Melissa before the kids come downstairs for school.

If you could have any superpower, what would it be?
To be a Jason Bourne.

What is the most positive thing in food, wine or cocktails that you’ve noticed in St. Louis over the past year?
Chefs taking risks, trying new concepts, signing leases, building out concepts, taking jobs in existing restaurants with all of the tough hours and workload. These are the reasons we all can have fun going out eat.

What is something missing in the local food, wine or cocktail scene that you’d like to see?
I would like to see a Missouri version of inexpensive Vinho Verde. With the hot summers in our area, this is how everyone in St. Louis should begin our meals. Light, refreshing and low in alcohol.

Who is your St. Louis food crush?
Whoever is cooking Chengdu spicy chicken.

Who’s the one person to watch right now in the St. Louis dining scene?
Chris Bork of Vista Ramen is creative, fresh, fun, and, he knows how to season every dish.

Which ingredient is most representative of your personality?
Parmigiano Reggiano.

If you weren’t working in the restaurant business, what would you be doing?
Writing reviews of music or live shows.

What is your after-work hangout?
My back deck.

What’s your food or beverage guilty pleasure?
Stinky cheese from France or Italy.

What would be your last meal on earth?
A family meal with my grandparents, parents, siblings' families and my family at one big table enjoying the blessings of laughter, joy and the gifts of this life. It’s how I fell in love with dining and that is what I try to model my restaurants to offer to our guests.