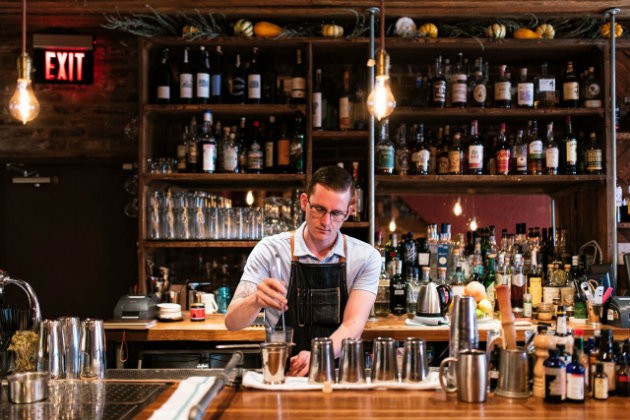 Drew Lucido may be behind the bar these days at Taste (4584 Laclede Avenue, 314-361-1200), one of the city's most revered cocktail institutions, but his bartending beginnings were much more humble.

"I started working in the restaurant industry at the age of seventeen as a busser at Mangia [Italiano]," Lucido recalls. "I went away to school for a while but dropped out, and when I came back I started bar-backing there. A bartending position opened up when I turned 21, so I took that and was a late-night bartender for two years."

While slinging drinks to the 3 a.m. set on South Grand was a much different atmosphere than where he is today, Lucido counts that time as a great learning experience. Not only did it teach him about keeping pace in a busy environment and the basics of building drinks, it also instilled in him a passion for the industry that he could not shake, even as he felt compelled to finish college and explore other paths.

School did provide him with clarity on his future career, though not through anything that happened in the classroom. Because of his studies, he transitioned from late-night shifts to Mangia's dinner service, an environment that allowed him to take his time and be more thoughtful. As he gained confidence, he began experimenting with recipes and eventually asked the restaurant's owner if he could put together a list.

The results were not great.

"It was a mix of classic cocktails and my own — and they were bad," Lucido laughs. "I recently found that list. I did not know what I was doing."

Lucido left Mangia for Sanctuaria, a change that allowed him to develop his skills at one of St. Louis' most innovative cocktail bars. There, he took a deeper dive into the craft, learning how to make syrups and infusions and develop good recipes. That experience positioned him to accept his first bar manager position at Juniper, where he was able to exercise creative control over the restaurant's beverage program. He was hooked.

"It was exciting," Lucido says. "I was reading articles and buying books and finding out about different trends — trying to copy them but also do them my way."

After Juniper, Lucido worked for Ben Poremba's restaurant group, first at Olio, then eventually at Parigi and Nixta, where he was able to put together lists for a diverse group of properties. It was a gig he thoroughly enjoyed, but then his dream job came knocking: Gerard Craft's heralded Taste.

"It was the place I'd always wanted to work because the focus is totally on cocktails," Lucido explains. "Not a lot of places exist because of cocktails — they have cool cocktail programs, but it is more about the food than the drinks. Here, it's all about the cocktails."

Though Lucido finished his degree in history, art history and graphical studies, he can't imagine doing anything but working in the spirits industry, where he can not only indulge his passion for the past in terms of the history of cocktail culture, but more importantly to him, relish the present with the knowledge that there's no place he'd rather be.

"I realize that this is what I want to do and what excites me," Lucido says. "Getting to be behind this bar is a dream come true."

Lucido took a break from putting together Taste's new cocktail menu to share his thoughts on the St. Louis restaurant scene, his caffeinated daily ritual and why you will never see plastic bottles behind his bar.

What is one thing people don’t know about you that you wish they did?
That I’m a huge nerd. I love to read sci-fi and fantasy novels and play tabletop role-playing games. I actually just finished re-reading the Harry Potter series.

What daily ritual is non-negotiable for you?
Drinking coffee. I make a 32-ounce French press every morning and drink all of it while I read a book. Honestly, I schedule it into my morning by getting up an extra hour early just so I have time to drink it all.

If you could have any superpower, what would it be?
I would want the power to instantly transport anywhere. I want to travel all over the world and try all of the amazing food and drinks.

What is the most positive trend in food, beer, wine or cocktails that you’ve noticed in St. Louis over the past year?
I’m really happy to see people opening up their own places. There is so much talent in St. Louis, and it seems like people are finally able to spread their wings.

What is one thing missing or that you’d like to see in the local food-and-beverage scene?
I’m sure there’s something, but honestly we're still growing as a culinary city, so I'm pretty content to be a part of the scene while we all learn together.

Who is your St. Louis food or drink crush?
Harrison Massie. We worked together at Sanctuaria when we were both starting out in the cocktail scene. Now he’s running Small Change, the perfect neighborhood bar. Also, he's a really good hugger.

Who’s the one person to watch right now in the St. Louis food-and-beverage scene?
I think that the beverage scene in general bears watching. As it spreads and grows, we're seeing lots of amazing bars with fantastic cocktail programs.

Which ingredient is most representative of your personality?
I’d have to go with Amaro, but definitely one from closer to the Alps. They’re dry and bitter but once you adjust to them you’ll love them.

If someone asked you to describe the current state of St. Louis’ food-and-beverage climate, what would you say?
It’s like a high school graduate that’s going on to an Ivy League school. It’s been doing really well and with more hard work, it’s going to be one of the best.

If you were not tending bar, what would you be doing?
Working for a major spirit company. You get to travel and talk with people about cocktails and spirits.

Name an ingredient never allowed behind your bar.
Cheap spirits. I started bartending at 3 a.m. bars, and a lot of the well bottles were made of plastic. Now, even the least expensive thing is something that I’d be more than happy to drink at my own house.

What is your after-work hangout?
My couch most of the time, but I’m also fond of the Ready Room and Parlor.

What would be your last meal on earth, including drinks, of course?
The tasting menu at Elaia — twelve courses with wine pairings and a Negroni to finish it off. If I’m going to die, I’d like to be full and a little drunk.