Stage Left Grille, Now Serving in Grand Center, Is Not Stage Left Diner. Got That?

Two months ago, the Grand Center eatery previously known as Stage Left Diner quietly reopened its doors with new owners, a new chef, a new menu and a new name (albeit one confusingly close to the old one): Stage Left Grille (527 N. Grand Boulevard, 314-534-2720).

But yesterday, something happened that may be even bigger news. Stage Left Grille was finally awarded a liquor license. Next on the agenda: breakfast hours and increased evening hours, too.

As chef Vince Anderson tells it, it's been a slow and steady climb to get to this point. "You have to walk up the ladder one step at a time," he says. "Slowly but surely, everything is coming together."

For years, the restaurant at the corner of Washington and North Grand was City Diner, the second outpost of the eatery of the same name on South Grand (again, confusingly, with a different owner).

But that wasn't the end. Anderson says the Fox Theatre has now taken control of the restaurant space. It hired chef Rich LoRusso, of neighboring LoRusso's on Grand, to serve as consulting chef, and he then hired Anderson, a veteran chef with numerous restaurant openings to his name, as co-chef and manager. In March, less than two weeks ago coming on board, Anderson opened the new and improved Stage Left Grille.

It's only recently that word has begun to get out. Because the restaurant has kept unusual hours, opening for lunch only on many days, serving dinner only on nights the Fox has a show, many St. Louisans failed to realize Stage Left Diner was now Stage Left Grille — much less that it's a completely new concept. Anderson says the new owners decided to keep the name because they like the theater theme, and indeed, the huge new theatrical posters on the wall are a great addition. (The place also got a new, toned-down paint palette, leaving it looking less counter-culture and more mid-century modern.)

For food, the kitchen is serving salads, sandwiches, a few soups and a trio of burgers. At night, you can also choose from a quartet of pastas. The Mediterranean shrimp, with garlic, sun-dried tomatoes and artichoke hearts over penne, is particularly popular. Even that is priced to keep the theater crowd happy; at $14.99, it's the most expensive thing on the menu by a full $2.

Anderson's focus is on upgrading what was often a less-than-magical food experience at the restaurant's predecessors, and making everything from scratch where appropriate. "I don't want mediocrity," he vows. "It's real prime rib in the French dip. We hand-bread the chicken tenders." He's experimenting with a house-made jalapeno corn-brat. "We want to offer food you can't get anywhere else."

And now, beginning this Saturday, May 26, you can get a drink with it. Breakfast launches June 7, and going forward, Stage Left Grille plans to keep evening hours whenever there's a show at the Sheldon and Powell Hall, not just the Fox.

Eventually, Anderson says, they'd like to be open six days a week for three meals. 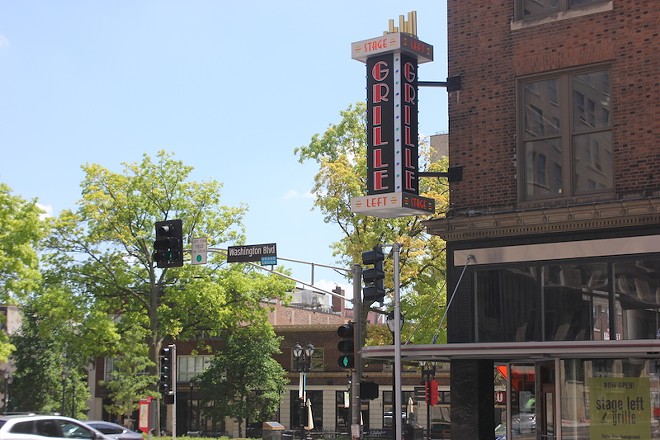