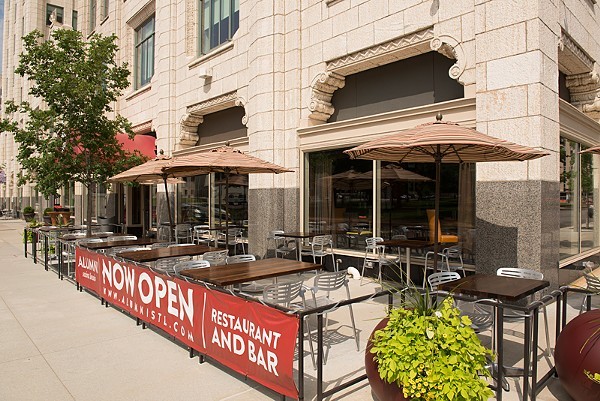 The restaurant announced the news on its Facebook page, saying it would be closed for renovations as of May 14. In September, the post said, chef Ryan Hecht will be opening two new restaurants on site, located on the ground floor of the Park Pacific building. The same message appears on the restaurant's web site.

Alumni Saint Louis opened in 2013 with noted chef Eric Brenner (best known for Moxy Bistro) at the helm. The menu featured a host of St. Louis-themed foodstuffs, from toasted ravioli to gooey butter cake, with a deck of St. Louis trivia cards on each table. Critic Evan C. Jones gave the place good marks at the RFT, but Ian Froeb wasn't so generous at the St. Louis Post-Dispatch: He gave the place 1.5 stars out of four.

A year later, Brenner left. Hecht, who replaced him, retooled the menu to feature comfort food classics, including BBQ lasagna and "Float Trip Trout." It's earned good reviews on Yelp for its friendly service and good food, though several readers mentioned that it didn't seem very busy. The big windows facing the street consistently earned positive mentions. Maybe the new restaurants opening this fall will be able to draw more diners to look out them.

We reached out to get more details about the new ventures. We'll update this post if we hear back.