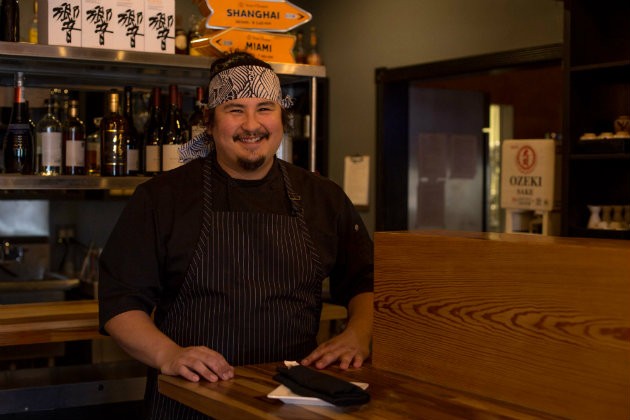 Looking back on his childhood, there was no way Nick Bognar was going to be anything but a restaurant person. He watched from an early age as his mom founded the beloved west county Japanese restaurant Nippon Tei (14025 Manchester Road, Ballwin; 636-386-8999), an experience that had a profound impact on the direction his life would take. However, as Bognar explains, his culinary roots go much deeper than being a self-described "restaurant kid" — all the way back to Thailand.

"My grandma was trained in the royal palace in Thailand back in the day when female noblewomen went to boarding school in the palace," says Bognar. "She was the last generation who were trained there in housework like sewing and mending clothing, tending to the house and cooking. When she was there she clung to cooking and as a result is a really great cook."

As the son of busy working parents, Bognar spent a lot of his childhood with his grandmother and has deeply rooted memories of spending time in the kitchen while she ground curry paste with a mortar and pestle. As she cooked, she would give him bites to eat, helping him develop an appreciation for flavor, even at a young age.

It was his uncle, though, who was the first in the family to start cooking professionally, opening a Thai restaurant in Cape Girardeau and another on Manchester Road long before the cuisine was popular in the Midwest. His success not only instilled in his family a sense of pride in the food of their ancestral homeland but allowed them to see it as a viable business.

Bognar's mother worked in the industry herself, first as a food and beverage director at the Butler Hill Holiday Inn, then as a consultant who helped other Thai families open their own restaurants. She finally decided that she needed to do her own thing. Her vision resulted in Nippon Tei, which helped fashion her son's career long before he realized what was happening.

"I always helped out in the restaurant, rolling egg rolls or crab Rangoon and helping out in the kitchen," Bognar recalls. "I started liking being at the restaurant a lot and stopped liking being at school. I liked the freedom and the fact that we would do all this work and people would come and eat. I just gravitated to the industry and stopped paying attention in school."

But when Bognar was given the opportunity in his junior year to take culinary classes at a local tech school, his passion for cooking turned him into a star student. He absorbed all he could and sought out additional education through articles and books. Taken under the wing by one of his instructors, Bognar accompanied him on regular catering gigs. And so after graduation, there was no question: He enrolled in the culinary arts program at St. Louis Community College- Forest Park.

Around that time, Bognar was interested in sushi and honed his craft at both Nippon Tei and Wasabi Sushi Bar. When his mom opened a second concept, Tei Too, Bognar helped manage it before deciding that he needed some time away from the family business and St. Louis to find himself.

That decision led him to Austin, Texas, where he worked at the esteemed restaurant Uchiko. The experience opened his eyes to both how much he did not know and how much he wanted to learn.

"Coming from working for so long at my mom's restaurant, I thought I would have one up on everyone at Uchiko," says Bognar. "I didn't. It opened up a whole new world to me about how to behave as a real professional, how to be efficient and work as part of a large team, and how to always strive to do better. I learned so much there."

After a year at Uchiko, Bognar moved to Cincinnati to join his girlfriend. There, he helped to open another sushi concept, his first opportunity to completely design a sushi program.

But though the restaurant did well, Bognar could not resist the pull to come home, especially when his mom said she wanted to change things up at Nippon Tei after an eighteen-year run. She knew her son was just the person to help.

About ten months ago, Bognar moved back to St. Louis, where he finds himself again working in the family business. However, times have changed. Now not just someone who helps out, he has ownership of Nippon Tei's concept and has transitioned the restaurant into the area's premier spot for traditional sushi. He admits that the changes have been difficult to process for some of the restaurant's longtime guests, but says that once they give his new way of doing things a shot, they are dazzled.

And just as importantly, he is too.

"A friend who used to eat here when he was younger came in and asked what it felt like to be back in the same place where I started," Bognar says. "But I don't feel like I am working at the same place. I'm not sure I could be excited to be doing this if I felt like it was the same. The journey to get here has been long and arduous, but I am in a good place."

Bognar took a break from the kitchen to share his thoughts on the St. Louis food and beverage community, his love of history and corn dogs, and why making rice is the most important part of his day.

What is one thing people don’t know about you that you wish they did?
Even though I am trained in Japanese food, I am half Thai. Most of my Thai family are great cooks, especially my grandmother. Her recipes are incredible and they have influenced a lot of my own food.

What daily ritual is non-negotiable for you?
Making rice. Rice is so essential to the restaurant — it is the basis for the entire menu. I really like coming into the restaurant before anyone else has gotten there and taking a few minutes to complete this ritual.

If you could have any superpower, what would it be?
I would like to teleport so that I could travel anywhere and eat anything at any time. Also, bank vaults.

What is the most positive thing in food, wine or cocktails that you’ve noticed in St. Louis over the past year?
Since moving back to St. Louis, I've noticed that the food community has really come together. I have made an effort to check out the work other chefs are doing and I know a lot of them have done the same for me. Their support and honest critiques have been really helpful in moving my work forward.

What is something missing in the local food, wine or cocktail scene that you’d like to see?
I would really like to see more chef-driven Asian restaurants. I want to see Asian chefs cook the food they really love rather than conforming to outdated ideas of what Asian food should be.

Who is your St. Louis food crush?
Matt McGuire from Louie. The first time I met him, I was eating at his restaurant. The place was incredibly busy, but he took the time to say hello and just kept dropping these amazing aged wines and food at my table. I think he is a sage in the restaurant industry, a master of all aspects of operation.

Who’s the one person to watch right now in the St. Louis dining scene?
Matt Wynn of Good Fortune. I started following him a few years ago before he moved to New York and have kept up with him over the years. I finally got the chance to meet him recently and he is a super cool dude. I’m excited for people like him who left St. Louis to come back and share their knowledge and food with us.

Which ingredient is most representative of your personality?
Skin-on crispy pork belly. Crispy exterior, but tender and fatty on the inside.

If you weren’t working in the restaurant business, what would you be doing?
I would probably be teaching history. I am a total history dork, especially when it comes to ancient battles.

Name an ingredient never allowed in your restaurant.
Clove. I know it can be used in small doses properly, but I’ll always choose star anise.

What is your after-work hangout?
My house. I just like to chill. If I can get off early enough I love grabbing some late-night bites at Vista Ramen. They make such tasty food there. The fish caramel ribs are my favorite, and everyone who works there is super cool!

What’s your food or beverage guilty pleasure?
Two words: corn dogs. I talk about my love for corn dogs so much that I tend to receive them as gifts.

What would be your last meal on earth?
I would eat at Sushi Saito in Tokyo and enjoy amazing omakase. Arguably the best in the world.